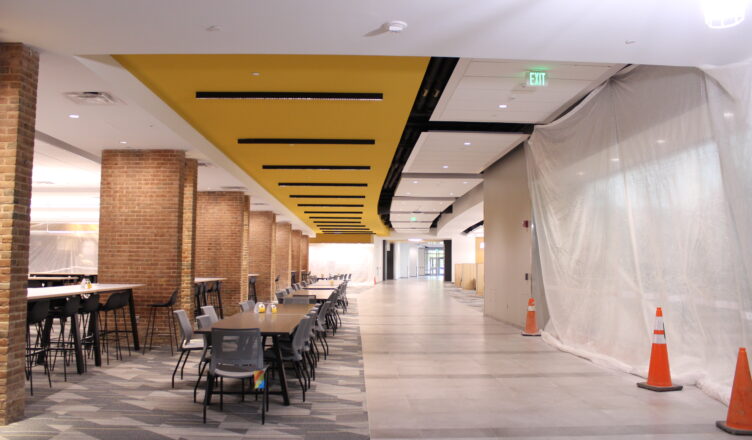 Towson University’s (TU) Union serves as the hub for student life on-campus. With the progression of the “Brand New U” project, the updated Union is opening up its doors to students.

The plan for the new Union is split into two phases. The first phase includes an extension including a food market hosting Dunkin’ Donuts and Chick-Fil-A and more, a 300-seat movie theater/auditorium, and a 15,000 square-foot ballroom.

The second phase will consist of renovations to many areas of the building, including the Paws Cafe, and the creation of new offices for student organizations.

Just a few weeks ago, the second floor of the Union was reopened, and new facilities, including study areas fitted with flat screen TVs and meeting rooms. The end is near for the first phase of the “Brand New U” project, however, students will have to wait a little longer for the food market to open.

TU President Kim Schatzel has said that Towson students can expect the dining area to be completed later this semester.

“I’ve told them I want to have turkey sandwiches in there for Thanksgiving, so, you know, I’m going ‘If it’s not done by Thanksgiving…’” Schatzel said. “So I would say late October, early November.”

For Schatzel, the excitement for the new Union is tangible when talking to students. The new dining area in particular has been cause for much anticipation.

“And if I’ve been asked once, I’ve been asked ten times by students, ‘So when’s the Chick-fil-a opening President Schatzel?’,” Schatzel said. “The issue there is actually a supply chain issue. All of the food places in there are franchises, so they’re building it out to be able to fit the standards of those different food franchises, like Chick-fil-A. It’s hard to get the sinks and things like that.”

“I’ve just been eating at the same dining halls, and since the Union is so close to my dorm, it’ll just be nice to get more options on campus,” San Buenaventura said.

The second phase of the Union’s renovations is expected to be completed by Fall 2022. This section will see the renovation of Paws Cafe and many student organization offices, including Student Life and Civic Engagement offices, among other existing locations in the Union.

“[The first phase was] the expansion piece of it, and now this is kind of a renovation piece of the rest of the old Union,” University Marketing and Communications Interim Vice President Sean Welsh said.

Walking through the Union, students can be seen sitting at tables and studying or talking, and clubs and organizations have already started meeting in the lounges and ballroom.

“It kind of brings this sense of life into Towson,” freshman Faith Hupp said. “Especially after quarantine, where we were all not really able to see anyone. I think it’s a nice thing to do.”

For more progress updates as the project continues, visit https://www.towson.edu/facilities/construction/union.html