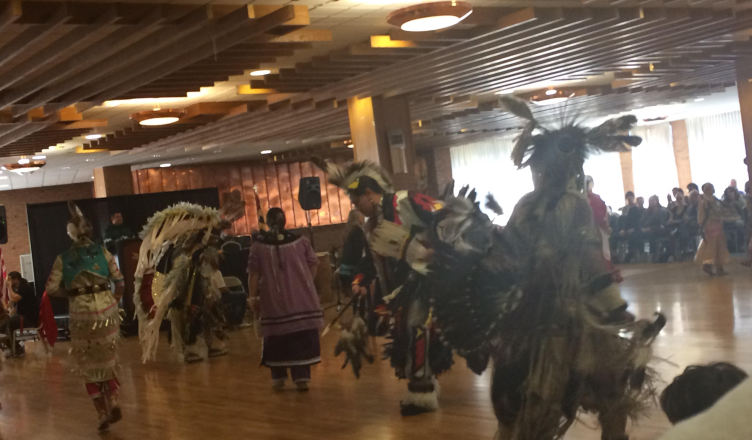 Dance took center stage at the Native American pow wow hosted in the Union Saturday, Nov. 19, but attendees also reiterated the importance of standing together with the Standing Rock Sioux against construction of the Dakota Access Pipeline near the tribe’s reservation.

“[I came] first and foremost to show some solidarity with Standing Rock and what’s going on in Dakota,” audience member Laura May Andrews said.

An informational table explained the controversy, which has drawn national attention as clashes between protesters and police have escalated, while vendors and civilian attendees alike repeated that “we must stand with our brothers and sisters at Standing Rock.”

“Diversity is very important, it’s very important for all cultures to be able to express their cultural nature and come together to give and share information,” community member Mary Irvin said.

Towson University partnered with the Baltimore American Indian Center to host the authentic pow wow, the BAIC’s 42 annual, in order to spread awareness and knowledge of native culture.

The pow wow was held in the Potomac Lounge, where dance exhibitions were presented by a variety of Native American tribes. Inter-tribe dances welcomed all dancers, while tribe-specific dances included only the experts in the specific dance, and a social dance invited audience participation.

Each dancer had unique garb specific to their type of dance and the dancer themselves. Each dance is considered prayer in motion, and, since prayer is very personal, no two dances were the same.

Every so often the audience was invited into the center to participate in dances such as the social dance, a dance honoring veterans and quick lessons on hoop dancing and Aztec dancing.

“It’s good to bring awareness to a culture that isn’t really talked about much and also it’s an activity where people can come together and learn more about Native Americans in general,” community member Olivia Howser said.

Outside of the Potomac Lounge were more chances to learn about and participate in Native culture. Information booths and vendors selling traditional art and jewelry sat on the second floor lobby. Inside Susquehanna, there was symbolic face painting, a Native American food vendor and more shops selling Native items.