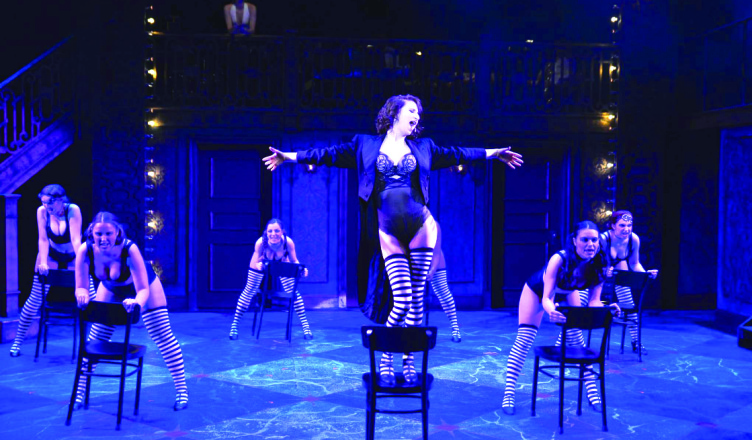 As finals near and work accumulates, students searching for some brief reprieve from all of the stress can go hear the music play at Towson’s production of “Cabaret” – high-energy, appropriately bawdy, and unexpectedly sincere, the show is the perfect escape into early twentieth century Germany, on the brink of Nazi regime and struggling to reconcile that with society’s livelihood.

As the emcee requests, leave your troubles outside. In the theatre, life is beautiful, the girls (and boys) are beautiful, the live band onstage is flawless, and amid laugh-out-loud scenes are real tear-jerkers as director Stephen Nunns explores the themes of the show within the frame of today’s political and societal climate.

“If [the audience] can think about it in terms of their own lives, connect it to their own lives in some way, shape or form, that would be great,” Nunns said. “I think it’s highly entertaining, so I hope they’ll be entertained as well. If it can make them think a little bit, that’s great.”

Nunns made an interesting choice in casting senior acting major Christy Czajkowski as the emcee, or Master of Ceremonies, the enigmatic, frivolous and charismatic character who presides over the Kit Kat Club where a good portion of the play is set – the role is generally played by a man, albeit a lipstick-wearing one, but Czajkowski’s performance androgenizes the role and takes it to a whole new level.

“I wasn’t expecting the role that I got and it’s been wild,” Czajkowski said. “It’s one I know I’m never going to get again, so I tried to take it and run with it.”

Czajkowski’s emcee was sexual, dramatic and irresistible, drawing attention simply with the presence and earning high praise as a favorite among audience members.

Czajkowski drew inspiration from Marlene Dietrich, a German singer from the thirties with a “beautifully low voice.”

“Once I found the voice, I started to find the character,” Czajkowski said. “I was trying to think of a backstory, because actors love doing that, but the more I thought about it the more I realized, the emcee is more an embodiment of the people of Germany, not a specific person.”

The Kit Kat Club as a whole took on a new spotlight in this production; “the girls” were not the only performers – male entertainers joined the ranks of performers, bringing a sense of equality and balance to the overly sexualized scenes.

“In other productions I’ve seen, the Kit Kat Club is really just ‘sex, sex, sex’ and that wasn’t the case here,” Lerner said. “They were there to tell the story.”

New meaning was given to well-loved characters like Sally Bowles (Molly Cohen), an English entertainer who is fighting for stardom; Cohen’s reprisal of the role creates new levels of depth and moral anguish as she struggles with a secret aspect of her identity in the face of an unforgiving regime.

In preparing for the role, junior acting major Cohen spoke with Nunns and said of it, “We thought about how much worse it makes her as a character if [her secret] is something she has and chooses not to do anything about, and just thinks about herself.”

Senior geography and economics major Molly Sokolis found the show to be poignant in unexpected ways, pointing out the underlying politics and social dangers.

“It was very interesting, but very good,” Sokolis said. “Funny, but I feel like maybe it shouldn’t have been funny, but it was still funny.”

Cliff Bradshaw (Griffin DeLisle) serves as a sort of foil for Bowles, the emcee, and other characters – he is an American writer in Germany to become the next great author, and he stands as a beacon for the audience to relate to as his sense of apprehension and frustration grows. DeLisle’s performance is reassuring to the audience amid characters who support or fear the Nazi regime to varying degrees, and stands as a presence to find both familiarity and camaraderie in.

Elizabeth McLaren, a sophomore psychology major, worked on the production as part of the sound crew, and wanted to make it known that there is a reason the audience finds these scenes so horrific and yet so understandable.

“We think of Nazi Germany as this awful, awful thing that happened long ago,” McLaren said, “But what I hope people take away is that you can adapt these themes into things we see today.”

The play presents a wide array of political viewpoints on the Nazi regime – Sam Pomerantz’s Ernst Ludwig is an active member of the political party, Cliff is adamantly against the Nazis, Sally ignores the political climate, Fraulein Schneider (Rachel Bailey) is a fearful citizen who does what she must to survive and who must deal with her love for Herr Schultz (Alex Wynd), a Jew, and the emcee disregards all seriousness.

“I hope people keep in mind dangers of not only being oblivious to what’s going on, but with my character, thinking it’s a big joke,” Czajkowski said.

The further along the production progresses, the more apparently certain messages assert themselves, like the one Cohen’s character gets across, which is, as she said, “Making the choice to not do anything, and sitting back, and how that is just as evil as doing bad actions.”

“To me it came off as an effort to make the story of the Cabaret something more abstract… not something you’re supposed to focus on,” Zeranko said. “[It’s not] ‘these are sexy men and women,’ they’re there to prolong the story and they are Germany, you’re watching the change in Germany through them.”

This production of Cabaret is at once gut-busting and tear-jerking, and there’s something in it for anyone. There’s so much more to this story than meets the eye, and this production takes that theme to its emotional and daunting conclusion.

Dialect coach BettyAnn Leeseberg-Lange and choreographer Rebecca Dorman were named by different people as two contributors who had a great degree of impact on the performance in shaping it and improving it.

“I work with such talented people and it’s such a pleasure to do that every day,” Wiseman, a senior theatre production and design major, said. “I feel like we bring [the audience] into this world in a very interesting way that a lot of shows don’t do.”

Performances of “Cabaret” continue this week, and tickets can be bought in advance online. (atevents.towson.edu/event/cabaret_6222#.WQ4WX7zhyTl)