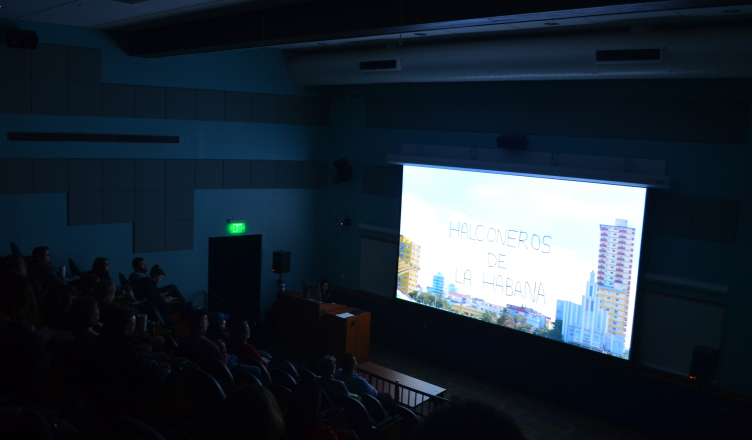 Photo by Elizabeth Maddox/ The Towerlight.

From Feb. 23 to 24, Towson University hosted WAMMFest, the Women and Minorities in Media Festival, for its 11th year running. The festival was open to community members for just five dollars, and free to Towson University students.

The festival showcased over 50 short films over the span of two days in Towson University’s Van Bokkelen hall, throughout the second floor.

WAMMFest was founded in 2008 by Towson University’s Electronic Media and Film Department. The mission of this event each year is to celebrate films, media, and filmmakers who are, and/or who celebrate, women and minorities. The festival featured filmmakers from local areas like Towson and Baltimore, as well as from different countries around the world.

WAMMFest 2018 opened for business at noon in Van Bokkelen Hall. The afternoon began with the Mid-Atlantic Emerging block that celebrated and encouraged upcoming filmmakers from the Mid-Atlantic area. This featured 10 short films, four of which were curated by Towson University undergraduates.

From commentaries like “Inside She Is Real” by Valerie Genzano (TU undergrad), to student animations like “Mustard Quest” by Kara Robson (SCAD undergrad), this collection of short films reeled in enough community members to pack full the auditorium.

One volunteer for the event, Omosalewa Adebusuyi, a freshman at Towson, said that she believes events like these are important to the community because it highlights minorities as creators, which is especially necessary in areas such as film. Adebusuyi also shared that she decided to volunteer for this festival thanks to her own passion for film.

“I [look up to] Viola Davis.” Adebusuyi said. “I admire all of the work that she’s done- she’s only been recognized really within the past five years, but she has been doing so much for a couple decades. She represents a lot of women in the industry.”

Up next was Block A, which brought back the popular VR (virtual reality) block, where viewers were able to watch and experience 360 degree videos from around the world. Locations included gardens in China, a coffee farm in Kenya, and many more.

“I had never watched a virtual reality film before coming here, it was so cool,” shared freshman, Jessica Stewart. “I honestly came because my friend, who is a film major, wanted to, but I ended up really enjoying it. I’m coming out of it with a new point of view on the film industry!”

Friday’s schedule came to a close with screening Block B: Late Night at WAMM. Starting at 10 p.m., WAMM presented 12 fresh shorts to end the night just as it should have- watching films.

“I’ll be back tomorrow!” Stewart said.

The last night of the WAMMfest, there was a screening called “Election Day 2016”.  Located in Rochester, NY, 10,000 people from all kinds of different backgrounds, age, race, gender and class came to pay tribute to Susan B. Anthony’s grave the day after the presidential campaign. The short film showed smiling faces amongst all people who united and celebrated creating a kindred spirit.

Jamie Taylor, who is a graduating senior interested in planning events in film after graduating from Towson, was very excited about this film to be added to the festival.

“The very beginning is the most inspiring thing because you see all these women supporting the women activists who got us this far,” Taylor said. “It was very emotional after the next day.”

The director/producer of this film is Linda Moroney, who came down from Rochester with one of her collaborators, Lorraine Woerner. They shared why they started this movement, their feelings when hearing the results after the election and their advice to women and minorities facing adversity today.

Moroney started a group in 2012, called the ‘Rochester Documentary in Film Makers’, where members meet once a month to share works of progress, resources and give feedback. “Election Day 2016” was their first collaborative project.

“I was the one who plowed through all the footage the first round so for me I felt like I had this project to do while the world felt like it was crumbling a bit,” Moroney said.  “I had something that was creative; I had something tack tiled to work on, so for me, it was great to have this and be like ‘okay hopefully this brings a light to some. It was a great vehicle to be creative and try to make sense of the situation.”

There were some people who were involved with the project that had to step away, according to Moroney, since it was just too much to focus on. Woerner expressed understanding how hard it was to focus on the project at times with so many things going on in the world, but shared how she stuck with it through it all.

“Well, when you put it out and asked if anyone could go, I was in my pajamas on the sofa and I’m thinking ‘this really sucks’,” Woerner said. “But I mean what else am I going to do? Otherwise I’m just going to be depressed all day which is why I went back.”

Moroney and Woerner said that an intention of an inspiring film is usually to be the celebration of change, however the motive for this film was to serve as a tool to build onto transformation; more specifically, to encourage people to register to vote who aren’t registered yet.

“I think that there is power in numbers,” Woerner said. “What is nice about our group is we all are producers and photographers. We all share a skill but we also all come at it from a different perspective and I think that collaborating made this film stronger. I think women need to work together. Sometimes you just don’t get that collaboration which is what was so nice about this project…we all just came together to do it. There was a common purpose.”

This group was not paid to produce this film; their dedication was soley because of their passion. However, with the popularity of the film earning a profit, they took a portion of the money to create an annual grant for a Rochester-based documentary filmmaker.

Moroney and Woerner shared a message that they want all women and minorities facing adversity to hear: “Register to vote; get out into your community, get your neighbors to register and if you are registered, find three people who aren’t,” Moroney said.

The duo are prime examples of women in film who create what viewers call an inspiring message, not just through their film, but through their dedication and work they do for their community.

This weekend’s WAMMFest celebrated the notion that transformation is happening, and projected the idea that it is up to everyone to continue to speak up and be proactive.