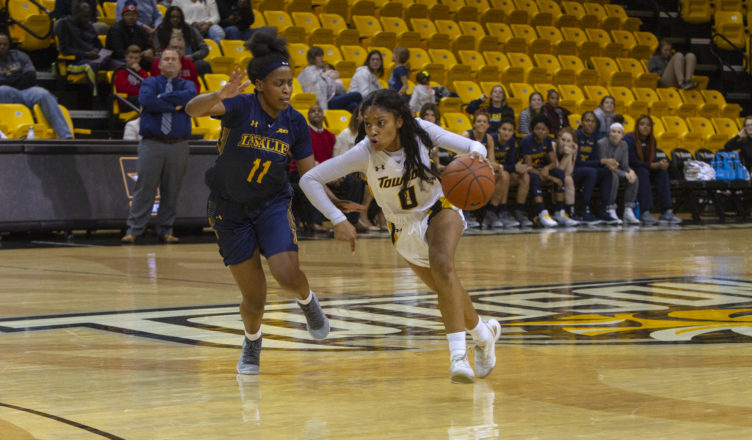 In a game that saw seven ties and seven lead changes, Towson came up empty in a 71-59 overtime loss to James Madison Sunday afternoon at the Convocation Center.

Junior forward Nukiya Mayo filled up the stat sheet, putting up  10 points, six rebounds and four blocks. Freshman center Janeen Camp had one of her best games of the season with nine points and 12 rebounds.

It was a tough game for sophomore guard Kionna Jeter, who picked up her third and fourth fouls early in the second half and shot 25 percent from the field.

“Obviously we like her being on the floor and she’s a very good basketball player,” said Head Coach Diane Richardson in an interview with towsontigers.com. “It did stifle what we wanted to do but the other kids stepped up so I was feeling good about that.”

Towson built a nine point lead late in the third quarter, but James Madison outscored them 18-9 in the fourth and 16-4 in overtime.

The Tigers struggled at the free throw line, shooting 55.6 percent, which can be a tough pill to swallow in an overtime game.

Towson will see the Dukes again in early March at SECU Arena, but for now the Tigers look to rebound at Hofstra on Friday, Feb. 8 at 7 p.m. at the David S. Mack Sports and Exhibition Complex in Hampstead, New York.