How to enjoy Towson athletics all year long

Towson University has 19 Division I athletic teams for students to cheer on throughout the year. There are 13 women’s teams and six men’s teams. Any Towson student who wishes to attend a sporting event can do so for free. However, attending football and basketball games require tickets which can be picked up at the box office in the first floor of the  University Union by presenting a OneCard.

On Saturday afternoons in the fall, students put on their black and gold and can tailgate up to four hours before kickoff in Lot 14, before they head into Johnny Unitas Stadium to cheer on the Tigers. Many students also enjoy going to SECU Arena to support volleyball in the fall.

Last year, football finished 7-4 while volleyball finished 26-6 and made an appearance in the Colonial Athletic Association (CAA) Tournament.

In the winter and spring seasons, students enjoy going to SECU Arena to support the basketball programs. Last season, the men’s team finished 20-13 while the women’s finished 7-24.

Johnny Unitas Stadium also hosts both men’s and women’s lacrosse, which both made the NCAA Tournament last year.

For incoming freshmen and transfer students, there will be plenty of opportunities to put on your black and gold and support the Tigers this upcoming year.

How to decide between club and intramural sports at Towson

For incoming freshman and transfer students who would rather compete than spectate, Towson University offers both club and intramural sports.

There are 30 different club sports offered at Towson and students who wish to join can do so by filling out an interest form online. After completing the interest form, a student’s information will be passed along to the respective club or clubs that they expressed interest in. In addition to completing the interest form, students will need to have a valid OneCard and health insurance card. Many club sports also involve a tryout as club teams compete against colleges from the local region and even nationwide.

So for students who still have a competitive edge from their high school or community college days, Towson likely has the sport for you.

How to get the most out of venturing uptown

If you’re on York Road on the edge of campus, you can go south (toward the Administration Building) and eventually get to Baltimore. If you head north (toward Newell) and up the hill, you’ll reach Uptown.

You’ve got the Towson Town Center mall, a new Cinemark movie theater and dozens of great restaurants. And, provided you’re, y’know, supposed to be able to go into a bar, there are some really great ones Uptown, including the newly-opened rooftop Greene Turtle.

There are a few 24/7 joints, like a Dunkin’ Donuts with free wi-fi and a Subway across the street from the Baltimore County Public Library.

During the summer, there’s a great farmer’s market that runs into late fall. And every spring, the Towson community comes to life with the Towsontown Spring Festival, featuring vendors, bands, beer gardens and carnival rides.

If it’s too far for you to walk and you don’t want to struggle with parking, the Tiger In Town off-campus shuttle route has multiple stops by the Towson Town Center and runs from 4:45 p.m. to 2:32 a.m.

How to catch ‘em all at TU

You might not have thought about it over the summer, but TU’s campus is a great place to play Pokemon Go. There are plenty of Pokestops scattered around campus and about half a dozen gyms.

If you go uptown, there are even more. The prime stops around campus seem to be the Glen (where there are four stops all right next to each other) and Freedom Square.

How to join a club

There’s no better way to make friends during your first semester of college than joining a club, and there’s no shortage of clubs and organizations at TU. Ranging from dance troupes to ministries to minority organizations, Involved@TU provides a directory of over 300 student groups on campus.

If you’re looking to meet people in your major, there’s probably a club for that (like the English Forum, or the Exercise Science club). If you’re trying to gain experience in your field, there’s probably something for that, too (hey journalism majors—the Towerlight office is in University Union room 309!). And if you have no idea what you want to join yet but know you want to get involved, the Fall Involvement Fair on Sept. 7 will have over 150 groups vying for your attention.

You’ll be able to meet representatives from different groups on campus.

How to go Greek 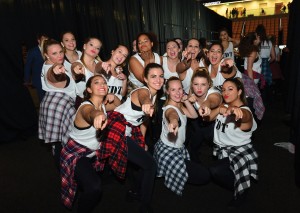 If you’re interested in joining Greek life, you have 35 chapters to choose from—a full list can be found online through the Towson University website. Freshman guys can rush this fall, but ladies will have to wait until the spring.

Anyone interested in Greek life must be a full-time student, although this doesn’t apply to first-semester freshmen and transfer students. The minimum cumulative GPA required to join is 2.5.

To apply, you’ll need to fill out a form in order to attend one of the four recruitment events held by the councils.

You can do that at www.towson.edu/studentlife/activities/fratsororitylife/join.html.

If you’re not sure which chapter you want to join, don’t worry—Greek life chapters will have a meet-and-greet on Sept. 8.