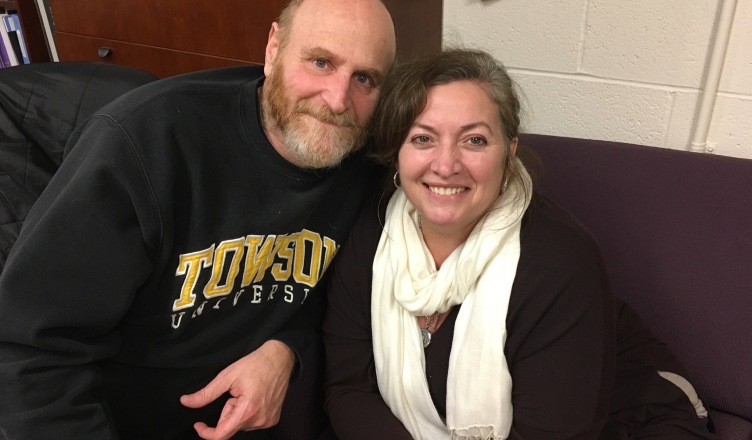 Jay Herzog is a theatrical lighting designer, who has been teaching at Towson University for 23 years. Donna Fox is an actress and has been an adjunct at Towson for 22 years, teaching acting. Both have been active in their professions since college.

DF: He was staff [at Brooklyn College], and I was a grad student… We met in the theatre.

JH: She was acting in a play, and I was recently re-singled. I was working with students on that play, and, I don’t know, she just kind of interested me.

MG: At this point, were you married?

DF: We were engaged.

JH: We went down engaged, and we got married one year in. We went back to New York to get married—it’s where our families are both from.

MG: And how did you propose?

DF: It was not romantic.

JH: No, it was not romantic. At all… So, we were going for pizza. We’d been invited to a wedding, in which my ex-girlfriend was going to be at, and Donna was discussing the [discomfort] of that, which is understandable, but we had so many mutual friends at that point.

DF (stage-whispering): It was a serious girlfriend.

JH: It was the only really serious girlfriend. So, we were going, and Donna was feeling upset, and so I looked at her and said, “Would you feel any better about this if we were engaged?” and she said to me, “Well, yeah, actually, I would.” And I said, “Great. Then will you marry me?” And then she looked at me, and she said, “Are you really asking me to marry you?” And I said, “Yes, I was thinking of some way to ask you to marry me, but we might as well just end this conversation now with, ‘Will you marry me?’” And she said, “[Can I] call my mother?” And I said, “Yes, [you can] call your mother.” Now, this is before cell phones, right? I said, “Wait a minute. I need a slice of pizza.” And I left the car, and I went to get a slice of pizza. I came back, because I’m set in my ways, and we went back to my apartment, which is where we were heading, and she called her mom and said that we were engaged.

MG: Did you have a ring?

DF: We were poor. We had just finished school, and we’re also not very materialistic people… we’re not very conventional people, at all.

JH: It’s vintage, which she loves. We also didn’t want to go into the diamond market very much. We wanted to find a used ring, and so I paid about a quarter of the value of the ring, and it was exactly the ring that she wanted. And this woman was really happy because she found out that Donna was engaged and so she brought it up. So she wanted to pass it on to somebody, and she’d known Donna since she was a young girl.

JH: So we were sitting at the table one night, and I’d not yet given Donna the ring. And Donna says to her cousin, who was over [and had asked to see the ring], and Donna says, “Well, you know, we don’t have a lot of money, and we’re going to get a ring down the road.” And I take her aside and say, “Maybe we shouldn’t really tell people that we’re poor. It makes me a little bit uncomfortable. Let’s find another story behind that.” I said, “Besides, you wanted a ring? I have one for you.” And I handed her the ring.

JH: So that’s the most unromantic, step number two.

JH: That’s our relationship! And I did kiss her at the wedding, so it’s official. We had a lovely wedding, on an antique ferry boat.

DF: Because, again, we’re not traditional.

JH: … It’s recently burnt down. We were thinking about going back for our anniversary, for 25 years, and it burnt down but we just got notification that they’re rebuilding the entire thing. So maybe for our thirtieth anniversary, we’ll go back to the place where we got married. That’s our goal.

MG: So, for how long have you been together now?

JH: We’ve been married 25 years, and were together probably three years before that?

MG: And you said she was “interesting”?

JH: Certainly attractive. And… she… she was in a play at the time, working with her best friend and her roommate, and I—like I said, I’d been newly single—and I… she was… oh, the stories we could tell.

JH: Basically, I started… becoming friendly, and then the official start of the relationship was her birthday. I went over to her house to start decorate for a surprise birthday party. I like to think of myself [as] the surprise. I knew she was a little interested at the time.

MG: What first attracted you to him?

DF: He was funny.

DH: He was funny. He was nice. He was easygoing and nice to be around.

JH: And your mother and father liked me.

MG: How do you two make time for each other?

JH: We’re both very fortunate, because we work in the same department. My full-time day started at 11 a.m., and sometimes I’m here until 11 p.m. according to what we’re doing in the theatre, but Donna’s classes were from 8 to 11 a.m.. So we did years of handing off children—we’ve never done childcare and never needed to. That was a choice that we really wanted to make… We balance our life. Do we see each other? Yeah, we see each other.

DF: Sometimes. There are times when we don’t, like when we’re doing shows. There might be times when it’s just a “hi.”

JH: Three weeks will go by.

DF: I teach in the morning. I have 8 a.m. classes, and he might not be getting home until midnight, depending on if he’s doing a show… and if we’re both doing a show, forget it. Even if we’re both home, we’re so exhausted. But it works, you know? It’s worked all these years.

JH: The answer was that academically rural North Carolina wasn’t going to give us what we wanted. It wasn’t where we wanted to raise our children, and also because we’re theatre artists, we didn’t have any opportunities outside of the university.

DF: It was a cultural wasteland.

JH: We made the move to North Carolina because it was an opportunity for me to break into the acting world. The job offer was there. I moved to Towson to get out of that. But, I’m very glad I did. I haven’t thought about going anywhere else since I’ve been here. We enjoy living in the region… it gives us an opportunity… It’s nice to have two [children] that are artists, because it gives you an opportunity to see their work, because they’re not in Michigan. It’s really lovely.

MG: What was the most difficult thing for you, as a couple?

JH: Unfortunately, that’s an easy answer. I was on my deathbed two years ago. I had a disease that killed my liver, so I had a liver transplant two years ago. And that’s a very hard thing for a family to go through, and I would define—and here’s where I get emotional, but I would define ‘love’ as getting through the hard times. Not going out for dates—those are easy. It’s having a spouse that takes off work and is 100 percent there for you, making sure your medications are in and changing bandages, and all that kind of stuff, and having your children being amazingly supportive of that as well. They couldn’t be any more supportive. I know a lot of relationships that have fallen apart over illnesses, because they’re not…

JH: They’re not easy, and they’re not pretty, and those relationships aren’t really as solid, and they tend to fall apart. So that’s a really easy question to answer. Love comes out when someone needs you.

MG: Do you have any advice for young couples who are going through difficult times, or

DF: Confront it. If you’re jealous, if you’re pissed off, fight. If you’re upset about something, say it. Argue about it, don’t keep it pent up, because the other person is not a mind-reader. We fight. It’s not all pretty and nice.

JH: I think—I don’t want to get political, but I think a lot of people are very tense right now, and I think that everything makes relationships more difficult. We’re more divided in our ideology than we’ve ever been, and so when you’re finding somebody, you’ve got to find somebody that you can actually deal with, based on their ideology. [Donna and I] come from very different religious backgrounds—I was raised Jewish, Donna grew up Catholic… but we found a way to go through that, too.

DF: And, 20-something years ago, that wasn’t too common.

JH: Fortunately, we had parents who were pretty accepting about that… I do think that this generation—your generation, if I can call it that—are hopefully breaking those rules. I just think that people should love whomever they want to love. It should be unquestioned, and I have faith that, even if it might be a little difficult right now, I have faith that eventually we’re going to become more accepting of each other, and more tolerant. I believe this is the generation right now—the college and high school generation—I think they’re the ones who are going to make the shift… Donna and I come from very different backgrounds, and our commonality is theatre. That’s what it was. We found each other through a common love for an art form.

MG: What would you say keeps a relationship strong?

DF: And we’re also very… I’m not sure ‘independent’ is the right word, but we both still do our own thing. I have so many friends of mine who were actors, let’s say, and they got married and stopped doing it.

JH: You need to allow for each individual to be.

DF: So that you don’t become the same.