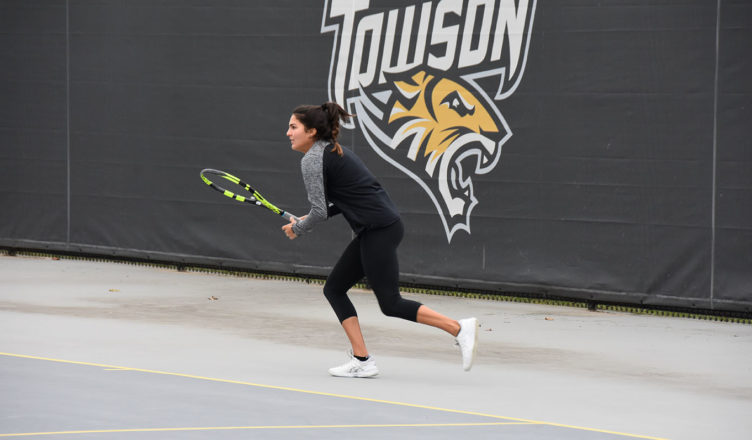 The Tigers suffered a 6-1 loss after a hard-fought evening match against the University of Richmond in Pikesville on Saturday, dropping their season record to 1-5.

“The trend has been we have gotten a bit closer with each match and each opponent a bit tougher as well,” Peterson said. “This was also the first time all year any of our girls played full three-set matches, they fought hard and did a lot of positive things.”

The momentum shifted in Richmond’s favor after the pair of freshmen Phoebe Collins and Jessica Assenmacher lost their match 6-4.

During freshman Themis Haliou and senior Lucy Gloninger’s doubles game, Haliou twisted her ankle. She was able to continue the match, but they ultimately came up short with a 6-4 loss.

However, Martinez ended up losing the third game of her singles match 7-5, and Shusterman was defeated 6-4, 3-6, 4-6 after a victory in the first game.

Both Gloninger and freshman Amelia Lawson won the first game of their singles matches, only to fall in the succeeding games. Lawson lost the final two matches 4-6, 1-6 while Gloninger won her first match 7-5.

“We will only get better and more match tough as we will probably play more three-set matches in the future,” Peterson said. “The future looks bright if we stay tough, work hard, and are resilient.”

The Tigers have this week off before heading to New York and New Jersey to face conference foe Hofstra on Saturday, March 2 at 5:30 p.m. and then NJIT on Sunday, March 3 at 1 p.m.