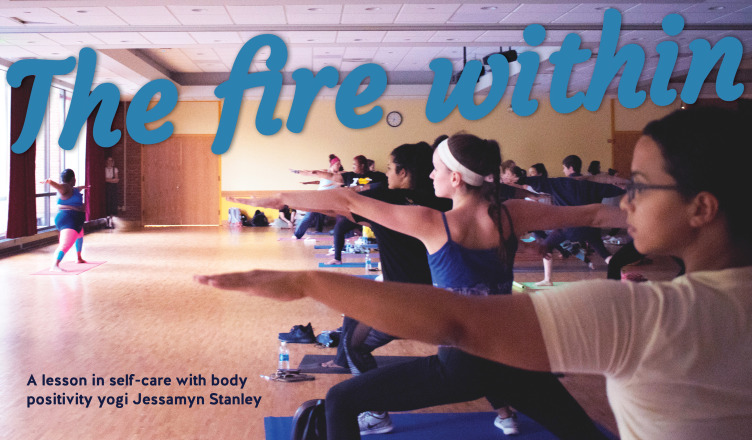 Yoga has taken the western world by storm; practically every gym that offers classes boasts at least one yoga instructor, yoga pants and athletic leggings that are tightly woven into mainstream fashion, and yoga mats that are practically a staple accessory at this point. But in a world of high ponytails, trim bodies and 105-degree rooms promising the best workout experience of your life, Jessamyn Stanley is determined to expose yoga for what it is: not an exercise fad, but a spiritual way of life.

Stanley led a yoga class at Towson on Sept. 28 and reframed how experts and novices alike think of the practice. The night also had a raffle featuring giveaways like water bottles and yoga mats, and Stanley stayed behind after the talk to sign free copies of her book that were provided, and to take photos.

At the beginning of the night, attendees laid out yoga mats on the floor in rows facing Stanley and the window. Experience levels ranged from licensed instructors, to people who had never done yoga before.

“I did it once, and it was hard, but it was fun – really relaxing,” said sophomore exercise science major Kaila Jordan.

Sophomore Nyia Lewis is a dance and choreography major who said there was a surprisingly large overlap between yoga and her major.

“Last semester for one of my classes, we actually did yoga for a week straight and it wasn’t easy,” Lewis said. “I’ve been wanting to [keep up with it], but I haven’t.”

Stanley herself wasn’t consistent with the practice in the beginning; her aunt dragged her to a session when she was 16 and she didn’t go back for years.

“When I went back, I was in graduate school and I was going through a period of [depression and anxiety] and one of my classmates was like, ‘Oh my god, try yoga, it’s going to help so much, you’re going to love it,’” Stanley said. “I was like ‘Absolutely not… it’s terrible and it’s not for me.’ So whenever people say they’ve tried yoga before and they don’t feel compelled to go back, I’m always like, ‘I totally feel you.’”

Despite her reservations, Stanley found herself drawn back in because she felt like she was “sleepwalking” through life, and yoga “requires you to push yourself past any boundaries, to see what’s on the other side of that.”

“That process is really scary, and it can be very frustrating,” Stanley said. “There’s a tendency to stop before you get to the boundary point, but if you push yourself beyond the boundary, what you see there is so much more than what’s happening within the boundaries. It was just being able to see pieces of myself that I had never seen before, and that’s what really encourages me to continue practicing to this day.”

Stanley’s method for leading the session was relaxed; she spent more time walking among their mats than up front leading people, although she would demonstrate certain poses that beginners might not know by name.

“Allow yourself to be drawn to this breath,” she said in the beginning. “Allow it to guide you.”

The entirety of the session was linked by vinyasas, which is the term used to describe a series of motions in quick succession that Stanley sees as “a great way to build heat and fire in your body.”

“The fire is amazing,” Stanley said. “It’s literally, in yoga, called ‘tapas’ and it’s the fire that burns away the pieces of yourself that don’t need to be there. So as you build the fire you’re sweating physically, your mind is expanding and going wild, but you’re building this fire within yourself that allows you to see yourself more clearly.”

Stanley coached attendees to focus in on their breath and clear all other thoughts from their minds; the lights in the room were turned out to allow people to tune in to themselves.

“There are so many places we could be right now,” Stanley said at the beginning as she walked among the different mats, “so many people we could be right now, to the point where the hardest part of practicing yoga is just getting onto the mat. Before we physically move, before we go any further, grant yourself permission to be here, in this body, in this moment.”

Kaleab Getachew, a sophomore exercise science major at Towson, started doing yoga to take better care of himself and his emotional health.

“I started doing yoga in tenth grade,” Getachaw said. “Mainly for emotional health; I wasn’t happy a lot so I wanted to do some self-care, and I liked it a lot.”

Yet Getachaw, like many others, sometimes has a hard time focusing on the spiritual aspect of it and admits that he can get caught up in the competition that can come from practicing next to others, in class environments.

“I kind of liked how [Stanley] was talking about it because it was a little bit of a refresher,” Getachaw said. “I should just remember that I’m more important, it’s not the pose.”

As the instructor in the room, Stanley makes sure she is always aware of her attitude; she recognizes that yoga is very much “entrenched” in the fitness world and that a lot of people go into the experience expecting the results you get in a fitness class.

“But yoga is not about that at all,” Stanley said. “It’s a spiritual thing… It’s really about being able to have a very honest conversation within yourself about what’s going on with the merger of your spirit, your mind and your body.”

She was careful to keep the class feeling relaxed and happy; throughout, she cracked jokes about the Juvenile song “Back That Ass Up” to get people to get a certain pose right, made comments about getting “Quasimodo neck” from doing certain poses, and frequently lightened the mood by saying things like, “Yoga was not made with uteruses in mind, so I like to make space for mine. Make space for your body.”

“It’s very funny to me because I was always confused when people would be like, ‘Wow, I didn’t know a fat person could do yoga,’” Stanley said. “But over time, I realized that, more so than representing the unicorn, I’m very much the every-person. I’m the person who has not been represented at all, and I think there are a lot of people, even people who look like they belong on the cover of Yoga Journal… see someone like me who is kind of different, and kind of awkward, and very honest, and they see themselves.”

She described writing her book, “Every BODY Yoga,” as “filling a void” that the modern world of yoga might not realize exists, and this was seen most clearly during her session when she told attendees, “My belly doesn’t care about being perfect in these poses.”

Stanley’s instruction interwove the physical aspects of yoga, the poses, with the body positivity she’s becoming so well-known for. As attendees held their poses in the quiet room, Stanley stepped between the mats and coached them not with tips on holding the form perfectly but on their thoughts and their breath.

“It is so much easier to say horrible things to ourselves than to accept our perfection, our beauty,” Stanley said as attendees went into their cooldown. “Accept that everything you just did was perfect. Come back to that steeping in gratitude. See your perfection.”