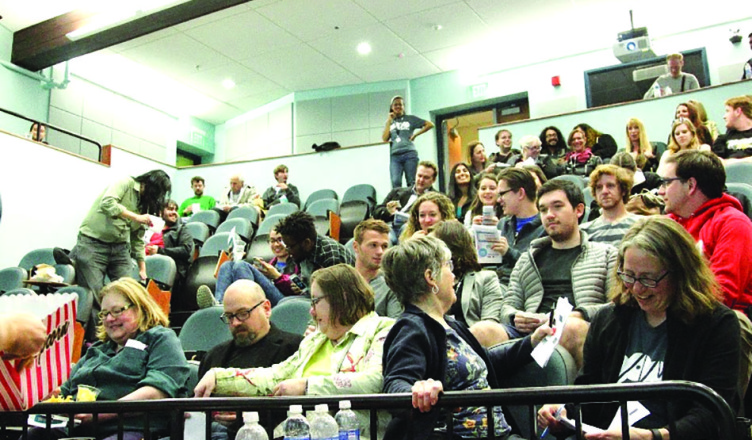 People don’t have to look far past the Golden Globes or last year’s #OscarsSoWhite to recognize the underrepresentation of women and people of color in film. From 2007 to 2016, women directed just 4 percent of top-grossing Hollywood movies.

In 2015, racial minorities accounted for just 13.6 percent of “top film” leads (compared to 29 percent of women) and 10 percent of directors (and before you say “things are getting better,” those numbers have fluctuated since 2011, and were higher in previous years.)

In an effort to be a vehicle for the voices of women and non-white filmmakers, associate professor Elsa Lankford (with the help of two other faculty members) launched the Women and Minorities in Media film festival—colloquially known as WAMMFest. Starting Wednesday, Towson will host WAMMFest for the tenth year in a row.

“I co-founded WAMMFest [because] we were looking at our classrooms and realizing that they weren’t nearly as diverse as they could be,” Lankford said. “We wanted to celebrate the diversity that we had within the EMF department and encourage more [diversity].”

This year’s WAMMFest will feature 67 short films produced by women and minority filmmakers from over 20 countries around the globe. Locally, the work of high school students from the Baltimore-based youth group Wide Angle Youth Media will be featured in the “emerging filmmakers” category.

With more than 1,000 entries from filmmakers in 80 different countries, the winners are divided into five categories — animation, comedy (formerly LGBT), documentary, narrative and virtual reality, which was added this year.

The subject matter of the winning films ranges from a young girl on her natural hair journey in “The Big Chop” (directed by Derek Dow and written by Alisha Cowan), to documenting a couple who have been together for over 40 years as one of them suffers from Alzheimer’s in “Alzheimer’s: A Love Story” (by Monica Petruzzelli and Gabe Schimmel).

“We have seen, over the past few years, more and more people are starting to be very aware about diversity in film and media in general,” Lankford said.

Although Lankford prefers to “leave [her] own politics out of it,” she said that the Trump administration and political climate “have been hard on women and minority filmmakers.”

During the administration’s attempted Muslim ban, Lankford said “there was real concern” about whether WAMMFest “and other festival artists” would be allowed in the country.

“We need to make sure that everybody is able to tell their story. That’s what helps connect people from all different political backgrounds — stories,” Lankford said. “Everybody wants to be engaged and entertained, and the more that you have these stories from different points of view — women, minorities, people from different countries — that’s where social change can really happen.”

In addition to the screenings, WAMMFest will also host panel discussions featuring the winning filmmakers, karaoke, and a master class about virtual reality throughout the week. To celebrate the tenth year of the festival, students will have a chance to attend a Q&A on Wednesday night with guest artist Sonja Sohn, most notable for her role as Detective Kima Greggs on “The Wire.”

On Friday, Women in Film and Video will host a panel about story pitching and on Saturday, the Baltimore chapter of Film Fatales will discuss media-makers roles in social justice movements.

“That panel isn’t just for filmmakers — it’s for anybody that wants to be involved in more activism,” Lanford said. “Part of what I would love to see more is connections between students that are, say, in liberal arts, connecting with students in our department to really combine those passions of social justice and film and media making.”

WAMMFest is open to all students for $15 on Wednesday and $5 Thursday through Saturday. To purchase tickets, read about the films or look at WAMMFest’s schedule, visit wammtu.com.