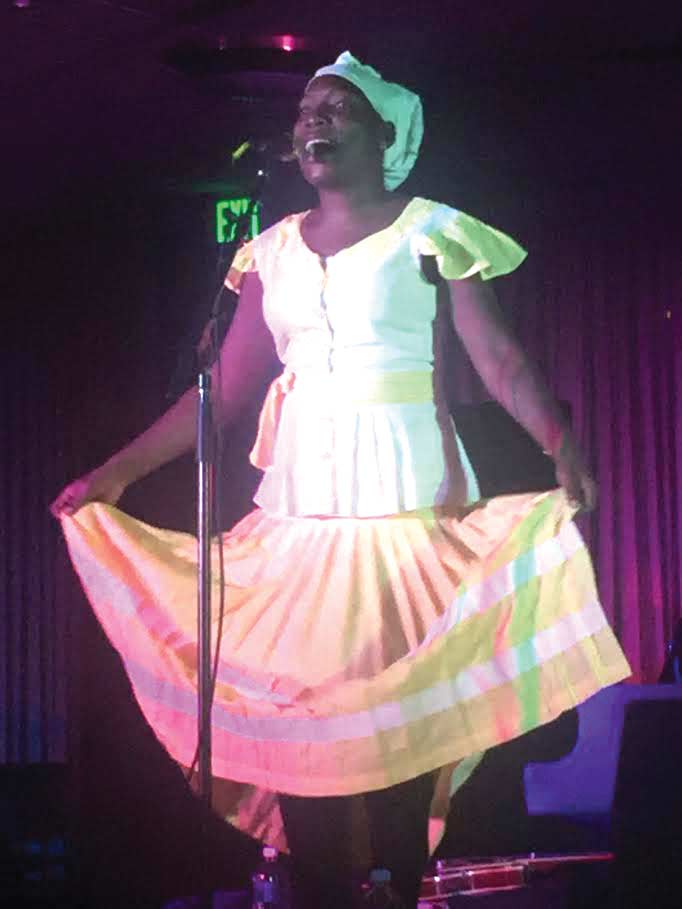 The Garifuna Collective and featured performer Umalali shared their culture with Towson students, members of the community, and the U.S. ambassador of Belize by using songs, dancing, costumes and many different types of instruments.

The Foreign Languages Department and the College of Liberal Arts collaborated to bring the performers to Towson University on Oct. 4 and 5.

Garifuna is the African language that the group sang all of their songs in.

The United Nations Educational, Scientific and Cultural Organization officially proclaimed in 2001 that the The Garifuna Collective is a “Masterpiece of the Oral and Intangible Heritage of Humanity.”

The performance featured Towson music professor and ethnomusicologist, Lauren Poluha, who studied Garifuna music for her doctoral research while she was living in Belize. Poluha was invited to play the drums on stage for a portion of the performance.

“I love my professor a lot, and when I found out that my professor was also an ethnomusicologist, that really inspired me to come to this event,” said sophomore music and Spanish major Carly Hufford. “I want to do something with music and culture, so I need to get experience listening to those types of music and becoming familiar with different musical instruments and cultures.”

The Belize ambassador to the United States, Daniel Gutierrez, came to Towson University from Washington D.C., to see The Garifuna Collective perform.

“I heard that this group from Belize would be here, and once they were here, I had to be here,” Gutierrez said. “I’m honored, I’m grateful for the invite from both The Garifuna Collective and the University. I’m happy to see that the University is promoting this unusual, but very Central American music.”

Gutierrez said that his favorite part of the performance was the drums, since he just arrived in America from Belize this past July, and he grew up listening to this music.

“When those drums rumble, the soul yearns for the motherland,” Gutierrez said. “When the music starts, it really takes you back. We don’t hear that everyday in D.C., so that was the most special part. My daughter got up and started dancing, so that is truly special.”

Sophomore vocal music education major Kirsten DiBastiani said that the best part of the performance was dancing with the group.

“I liked getting to come up here and let myself go for a night,” DeBastiani said.

Freshman business administration major Allison Taylor said that she is taking a class on Latino identity and music, and that she came because her professor Lea Ramsdell coordinated the event.

Taylor said that the group came into their classroom for an interview earlier that day, all wearing different costumes than they wore in the show. They spoke about growing up in Belize, and the ways that culture has impacted them.

“They talked about how they educate people in Garifuna in Belize, and how they are the main educators,” Taylor said. “They have the only bilingual school there. I loved dancing in the front with them, and just feeling everyone in the audience get up and come to dance.”

Veronica Arzu, one of the performers, said that she grew up in Seine Bight, a village in Belize, and that her grandfather inspired her to start performing because he was a singer and a dancer in her village.

Arzu says that her love of dancing has been within her from a young age because her grandfather would take her out to dance every year around Christmastime.

“That’s the reason why I keep on doing it — because it’s something that I love,” Arzu said.