Four out of Five Stars

Queens of the Stone Age has broken its five-year silence with a new album entitled “Villains”. QotSA is led by guitarist and vocalist Josh Homme, and became acclaimed in the 2000s for its brand of stoner rock featuring heavy guitars and dark songwriting.

The group rose to great fame with the album “Rated R” in 2000, and followed it up with the earth-shaking “Songs for the Deaf”.

These albums started off as semi-solo efforts for Homme with an array of his rockstar friends chipping in, including Dave Grohl of Nirvana and Foo Fighters.

The band’s last effort, “…Like Clockwork,” was a major triumph for the band, with Homme striking a balance between bringing in all-star guests like Elton John, while also putting together a more consistent band to back him up.

However, “Villains” seemed to be a departure early on with Homme announcing that Mark Ronson, the mind behind “Uptown Funk,” would be the producer of the album.

While many fans were skeptical, I was very much intrigued by what I heard from the first few tracks.

“The Way You Used To Do” is a track that is one of the best dance songs that has come out this year. This song finds Ronson in his comfort zone of producing dance music, but the album doesn’t stay in that territory for long.

The tone of the album is rock instead of straight dance music. Ronson seems acutely aware that he is working with a rock band and holds his own in the studio in order to make the guitars absolutely scream, as well as remain subdued when the time calls for it.

Homme shows his prowess as a songwriter as well with “Feet Don’t Fail Me” and “The Evil Has Landed,” two tracks which show the unhinged guitar work any fan of this group has come to expect.

There is also a much more varied instrumentation here than the metal guitars that fair-weather fans of this group may come to expect.

“Domesticated Animals” shows them working with keyboards to great effect, while the closer, “Villains of Circumstance,” has a string section that always seems to fit comfortably next to Homme’s falsetto vocals.

This album feels like a proper follow-up to the band’s previous effort “…Like Clockwork,” which many fans were hoping for. While that album showed QotSA’s moodier side, this album is the experimental side of the band, but still has incredibly catchy melodies.

Unlike the last effort, this album features QotSA as a fully-functioning band rather than a ragtag team of musicians making incredible rock music.

The listener gets to hear the band playing off each other in a very refreshing way. Be warned, though, some tracks are pretty long and could lose the casual listener after a while.

If you’re into QotSA, you can dive into this record head first and be entertained, and for those who are just skeptical, this is a rock album worth checking out. 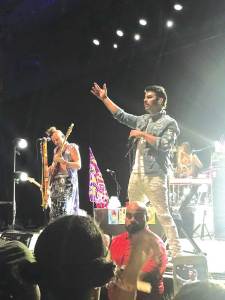