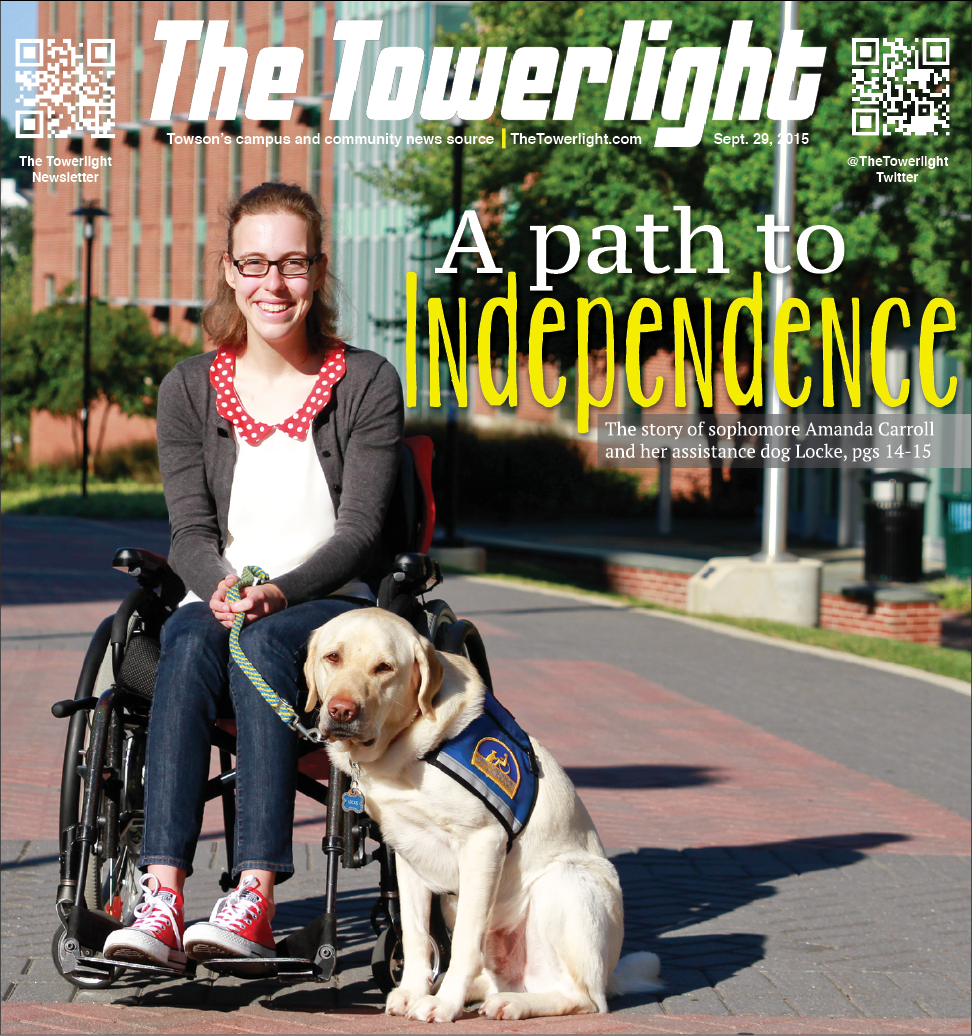 When Towson sophomore Amanda Carroll was a senior in high school, there were three things she was determined to do.

Second, get herself as far from her hometown of Orlando, Florida as possible.

And third, under no circumstances would her disease keep her from doing those two things.

After she was diagnosed with mitochondrial disease early in high school, Carroll was too weak to stand and began to use a wheelchair to get around. She could no longer dance, participate in marching band, or even attend school, as the long days were too strenuous on her body.

Instead, she finished her schooling online through Florida Virtual School and spent her time volunteering at the local children’s hospital until she felt ready to begin applying to colleges.

“Towson was kind of the goldilocks school,” Carroll said. “They had my major, the price tag was good and the disability support services were unlike anything I had seen, because I went to lots of different universities and they are not as robust as they are here at Towson.”

Even with Towson’s extensive Disability Support Services (DSS), accessible campus and surrounding area, and Carroll’s unyielding desire to secure total independence for herself, she was still concerned about the effects her sickness could have on her hundreds of miles from home.

Carroll soon learned about a nonprofit organization called Canine Companions for Independence, which raises and trains assistance dogs to aid and enhance the lives of people with disabilities.

After a year of patiently waiting, Carroll was introduced to Locke, a fluffy, sweet-tempered yellow Labrador Retriever in May 2014 on the day of her high school graduation.

“I decided to look into getting Locke because the possibility of going to college was beginning to get real for me,” Carroll said. “My parents and I knew that I needed extra support, but I was vehemently against getting outside help such as a nurse or an aide.”

Carroll said a service dog would allow her to have autonomy and independence while still being there for support when she physically needs it.

“I was able to see that [Locke] has so many skills that can help me right now, but that it would also have that emotional component and that social component … it kind of mitigates the disability,” Carroll said. “People are more likely to come up and say hi with the dog versus just me in a wheelchair.”

However, she said, this mitigation is both a blessing and a curse.

“It does give me that talking point, but also at the same time it is very isolating because oftentimes when people talk to me, they don’t really talk to me, it’s talking about Locke,” she said.

Carroll also describes what she refers to as “drive-by petting,” in which people stop to pet Locke as they pass her on the street.

Although it doesn’t bother her too much, it can be distracting for Locke who, when wearing his Canine Companions service vest, is technically on the job and should not be distracted from attending to Carroll.

In the summer following their meeting, the two bonded and Carroll learned how to train, care for and use Locke in ways that are helpful both practically and emotionally.

“He does a lot of mobility tasks for me because my hands don’t work very well, so he can flip on a light switch, if I drop my pen he can pick it up for me,” she said. “He can pull something, he can close a door, he can pop the automatic door buttons.”

By the time Carroll left for Towson that fall, the two were like “an old married couple,” Carroll said.

Today, Carroll is pursuing a major in family and human services with the leadership in the nonprofit sector track as well as a minor in business, and lives on campus in West Village’s Barton House with Locke.

She keeps herself busy working at the Community Center desk at Barton House, volunteering every Friday at Ronald McDonald House, and acting as a Presidential Ambassador.

“I’m really passionate about giving back and students taking ownership of Towson, and I really love Towson, and that’s something that’s been really awesome that has come into my life,” Carroll said.

Among other activities like taking part in a local running group, which provides her with adaptive equipment to take part in different 5k’s around Baltimore, Carroll said that she loves to explore both Towson and Baltimore as often as she can.

“In my hometown I have to depend on someone to drive me even to get to the closest grocery store,” Carroll said. “But here I can get on the bus, I can go all the way down to the Inner Harbor, I could take the bus up to the mall. It helps me really be independent which, I want to get my diploma and I want to get the college experience, but for me it’s allowing me to be independent, which is huge.”

Although she said that navigating and coordinating timing with the bus can be challenging and confusing, it doesn’t keep her from doing what she wants to do. Often, Carroll says, she “takes the path of most resistance,” in her life.

“What terrifies me is being locked into one place, like before coming here, just having your world so restricted and knowing that you can’t do anything is the most disempowering thing,” she said. “It’s so empowering for me to know that hey, I can do this, I don’t have to tell anybody where I’m going, I don’t have to wait on somebody to be there for me. It’s just so cool to be the 19-year-old that I am.”

That 19-year-old is a funny, vivacious, determined and giving young woman who is able to speak frankly and with confidence about her disease. She said that as a young woman who uses a wheelchair and has an assistance dog, she has heard just about every question and comment about her condition from friends to strangers on the street, and has learned to “take it lightly,” she said.

“I mean I’m very open book, if people ask I will give you my honest answer,” Carroll said. “I actually welcome people asking me because it increases awareness. But at the same time I try not to make it, ‘I’m Amanda Carroll and I have mitochondrial disease.’ It’s something that I’m totally okay with, it’s part of who I am, but it’s not what defines me.”

Although Locke provides Carroll with support on a day-to-day basis, she also said that Towson’s DSS have been helpful to her as well during her time on campus. Having a disability specialist who is specific to Carroll’s physical and medical challenges and can provide her with advice about campus resources, she said, has helped her to learn how to advocate for herself.

She also prefers to take her exams in DSS’s recently renovated Testing Services Center, located in the Administration Building, where she is allotted extra time.

Because her disease can leave her functioning anywhere between 30 to 80 percent of a healthy person’s energy for the day, having the extra time to complete her exams is helpful on days where her handwriting or ability to process words might be a little slower.

The Testing Services Center is just one of the features of Towson University’s campus that has helped to expand the DSS department that has been growing and adapting since it’s inception roughly 20 years ago.

“When I started in DSS in 1998 there was just the DSS Director and myself as the LD Specialist,” Director of Disability Support Services Susan Willemin said in an email. “We had approximately 200 students registered at that time.”

Willemin said that there are now nearly 1,600 students registered with DSS.

Continuing advancements, such as the brick path that provides access to and from West Village Commons to Newell Hall, have been designed with accessibility in mind. This massive project also helped to level the grade of the landscape in several places on Towson’s hilly campus.

Carroll said that she doesn’t have any accessibility problems on Towson’s campus, because a majority of the buildings are newer and meet Americans with Disabilities Act, or ADA, considerations.

However some buildings with older elevators, and the lab stations in Smith Hall that are not wheelchair accessible, have given her a bit of trouble.

With push assist on her wheelchair, Carroll doesn’t worry too much about getting tired while traveling around Towson’s hilly campus but, she says, she does know where all of the “down” hills are located.