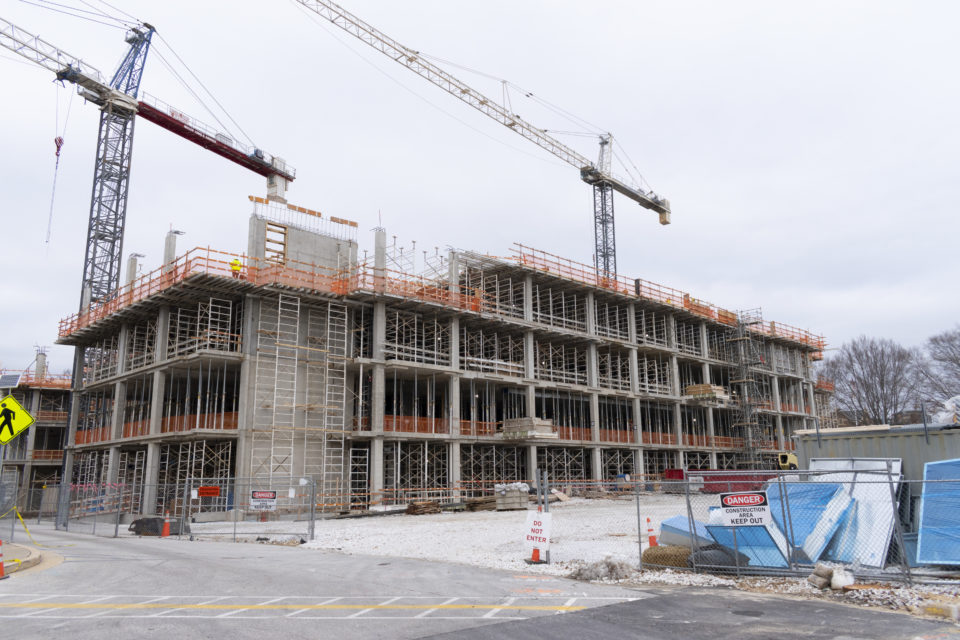 The average weighted GPA of the freshman was a 3.61, making them one of the most academically prepared classes as well.

There were also approximately 2,200 transfer students making their way onto Towson’s campus, along with 750 graduate students. In total, there were roughly 22,750 students enrolled at Towson in the fall of 2018.

At the beginning of 2018, one of the many construction landmarks came to a close. Burdick Hall was finally done being renovated. It was followed by the completion of the Residence Tower renovations being finished. These projects were just the beginning of something bigger.

In 2018, ground was broken on the new science complex, which can be seen rising from its hole next to the 7800 building along York Road. The building will have many different types of classrooms and collaborative student spaces, as well as a rain garden, planetarium and observatory.

The first phase of the University Union renovations also began in 2018. This phase will look to add an expansion onto the existing portion of the Union, and is set to be completed in the fall of 2020. The second phase, to be completed in 2021, will include a complete renovation of the existing space. When it is completed, the Union will include a 300 seat theater, and new dining options such as Dunkin Donuts. The former Marriott building was also renovated and turned into housing for transfer students.

Going into 2019, students can expect even more activity on campus, as Glen Dining Hall has been closed for renovations while other projects continue.

In 2018, Towson University President Kim Schatzel announced that TU will be getting a logo makeover. The new brand mark is the first in over 20 years, and is part of her “TU Matters to Maryland” initiative. Schatzel hopes that the new look will help tell a new Towson story to those in the community; one that says the university is no longer just a small, largely commuter, teacher preparation college, but something much more.

The logo can now be seen on the Towson website, and will be moving onto apparel and into email signatures a little later in 2019.

In April of 2018, members of the Jewish Fraternity Alpha Epsilon Pi, were allegedly assaulted and harassed near campus while walking back to one of the victims homes from uptown Towson.

The fraternity members had been called anti-semitic slurs, and were physically assaulted after being followed. The suspects reportedly punched the first victim in the face. After calling 911 and yelling for help, the victim’s roommate came outside and attempted to separate the altercation before also being punched.

The suspects, according to police reports, were “highly intoxicated” and “uncooperative.”

Schatzel addressed the event with a statement on TU’s website, saying that “hateful conduct is inexcusable and will not be tolerated at Towson University.”

November of 2018 began with a candlelight vigil in memory of those lost in the Pittsburgh Massacre that took the lives of 11 people in the Tree of Life Synagogue. Hosted by TU Hillel and Chabad House, the vigil began with a lighting of candles which was quickly followed by speeches from various members of the community, including Rabbi Mendi Rivkin.

“The answer to hate, the answer to darkness, is to add more light,” Rivkin said in response to the incident.

2018 ended as Towson community members mourned the loss of Mzimazisi “Mzi” Ncube at a candlelight vigil. The TU student was killed in a hit and run accident.

Ncube was struck by a vehicle while crossing North Charles Street. The car sped away, and Ncube was struck by another vehicle. The second driver stopped and called 911. Ncube was taken to a hospital, where he was pronounced dead. Police later identified the suspect as Bahadur Gurung.