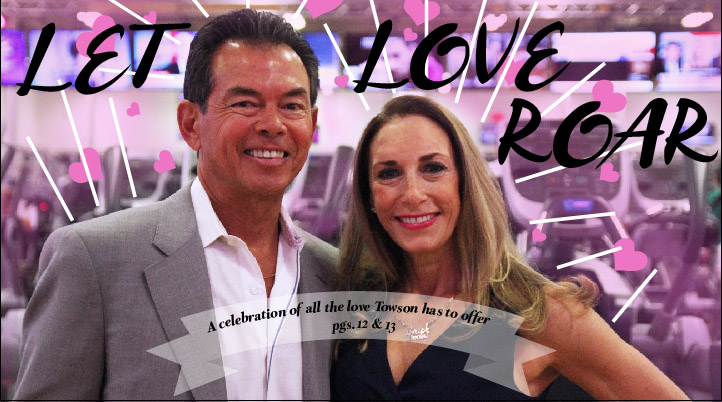 Victor Brick knew his wife, Lynne, was the woman for him when she marched through the doors of Burdick Hall in a leotard and tights and waved at him – well, in his direction, at least.

It turned out Lynne was waving at a friend, but it was too late to tell Victor that. He was already captivated by “the twinkle in her eye.”

“She had that look of ‘I can do anything. I’m up for any challenge,’” he said.

Victor turned to one of his friends at the time and said “See that girl? I’m going to marry her.” That was in 1975. He proposed at Christmastime of 1976 and the couple married in 1978.

Brick Bodies has been in business for over 30 years, but the road to forming the fitness franchise was paved with its fair share of frustrations.

After graduating, Lynne went into nursing, while Victor briefly worked as a physical educator until he realized the field was too restrictive for him and he got a job as a recreation director instead.

In August 1985, the Bricks bought the Padonia Fitness Center. But when Lynne became pregnant with their son, Jon, she slowly had to reduce the number of classes she was teaching from 22 to 12 per week.

As the fitness center lost money and accrued a $10,000 debt, the Bricks considered selling it back to its original owner, but they ultimately decided to stick it out and were able to break even.

“That’s when I made up my mind to never quit on anything ever again,” Victor said.

After 40 years of marriage and 33 years of being business partners, Victor and Lynne credit Brick Bodies’ success to the love they have for one another.

“Sure, it has its challenges and misunderstandings and all that kind of stuff,” Lynne said. “That’s normal. But most important, we’re both very passionate about the business and our roles … We’re also passionate about each other.”

Victor said being business partners as husband and wife has been easy; it’s the kids who make it a trickier, albeit fulfilling, situation.

“It’s difficult enough as a parent to raise your children and have them make their own mistakes,” he said. “It’s even more difficult when one of those mistakes can affect the business. But if you’re always telling them what to do, they’ll never learn and they’ll never fulfill their full potential.”

Lynne said their daughter, Vicki, is now the CEO of Brick Bodies, and Jon works in the technology industry in San Francisco.

“Because of Towson, we were able to meet,” Lynne said. “We were able to create these amazing adult individuals. Now they’re giving back to society.”

The Bricks strive to share their love and be part of something bigger than themselves.

“We believe ultimately you will be judged by what you give back to society,” Lynne said.

The Bricks started the John W. Brick Mental Health Foundation, a mental health organization named after Victor’s brother, which advocates for research about exercise as a method for improving mental health. The foundation holds various mental health advocacy and awareness events, like a 5K which will be hosted at TU in the fall.

Whether its running a business, maintaining a relationship with a significant other, or raising a family, Victor said you have to act as if you were holding a golf club or tennis racquet: firmly but lightly.

“You death grip a tennis racquet or a golf club, and you’re never going to have a good stroke,” Victor said. “So you have to learn to relax and enjoy it.”

If there’s anyone who understands the importance of enjoying every day, it’s the Bricks.

Lynne said that on January 19, 2001, Victor shook her awake, saying “Lynne, Lynne, are you okay? You’re having a bad dream.”

Victor told Lynne that her hands went up in the air and that she started shaking. Lynne, who studied nursing at Towson and worked in shock trauma after graduating, knew that she had gone through more than just your average bad dream.

“It was more like a nightmare,” she said. “I had just experienced a grand mal seizure and I said in my groggy state ‘I need to get to the emergency room right now.’”

Doctors ran a CAT scan and MRI, and told Lynne she had a brain tumor on her right frontal lobe.

The doctors removed the tumor, which turned out to be benign. But the incident helped the Bricks put their love and life together into perspective.

While Victor’s father was alive, Victor asked him “‘Dad, when are you going to take your cruise?’ He said ‘When I have the time, Vic.’ He never took the time.”

Victor’s advice for couples is to “never stop courting.”

The Bricks have a small mimosa every morning to celebrate the fact that “every day is a vacation.” Victor surprises Lynne with practical jokes, like turning all the clocks forward to make her think she’s running late for a meeting, or with spontaneous trips.

“I’ll come to the club to work out and he says ‘you have a half an hour to shower and we’re leaving,’” Lynne said. “He’ll have my bag completely packed and he’s like ‘if I forgot anything, we’ll just get it there.’”

Whether you and your significant other are attending a Towson basketball game or going shopping together, the Bricks urge couples to look at each day as new opportunity for adventure.

“Keep the fun, be playful, keep the romance and never get in a rut,” Victor said.

Brandy Hall, assistant director of leadership in the Office of Student Activities, passed by her boyfriend Drew Stephens countless times in the basement of the Media Center while the two of them were students at Towson University.

Brandy was a mass communication major and Drew was an electronic media and film major, but they never had a real conversation.

“We’d passed each other so many times and we just said ‘hey’ or ‘what’s up’ but we never hung out after that.”

It wasn’t until they had both graduated and one of Brandy’s friends convinced her to try online dating that the two reconnected. The couple matched each other on OkCupid.

Brandy said the thing that first attracted her to Drew – aside from his good looks – was the fact that he listens deeply and genuinely cares about what you’re saying.

“Anybody who knows me knows I’m a little extra, I’m a little over the top,” she said. “I embrace that and accept that about myself…. But the way when he talks to people, how invested and focused he is on you and your feelings at that time – for someone like me, who is always dealing with other people’s feelings and students’ concerns, it’s nice to kind of be able to step back and have a partner who wants to take care of you for a second.”

On their first date, Brandy came to Drew’s house in Canton where he had set up a taco bar for her.

“On that first date, I was like ‘this is about to be my best friend, ride or die,’” Brandy said. “I pretty much knew at that point.”

Since that night, tacos have become a tradition of sorts for them. The couple visits Nacho Mamas and Mama’s On The Half Shell every chance they get.

“When we go, those nights kind of bring us back to the first night when we were awkwardly looking at each other.”

Brandy said its those small efforts that build up to the grand love she and Drew share.

“Show affection and also be grateful for the little things that [your romantic partner does],” she said. “We don’t believe in doing extravagant things every weekend, spending crazy amounts of money. But I think you, whoever you are, you know how you like to be loved.”

The couple will celebrate their one-year anniversary this April, but Brandy knew during the third month of dating Drew – when she accidentally dropped the “L bomb” – that this relationship was something that would last.

“Some people don’t think we get to pick and choose what we want in a partner,” Brandy said. “But when you love somebody, you love the whole taco. You don’t just throw out pieces of it and don’t acknowledge it.”

Brandy’s advice for people who are looking for love is to “find the person that’s like ‘I still love you even though you’ve got raw onions.’ And I like raw onions, but somebody might not.”

Brandy said the most difficult challenge they’ve faced together is learning how to deal with one another’s habits and behaviors.

“One thing we’ve had to work through is being able to understand what the other person is emoting,” she said. “For me, you get the physical tears or the anger, where with Drew he’s very calm, quiet even when he’s mad.”

She said the two of them have worked through those miscommunications to better understand how the other person is feeling and what they need.

While Brandy said it probably wasn’t love at first sight in the halls of the Media Center, she does think it was fate that brought her and Drew back together.

“We were in two different spaces and I had needed to grow up and go through some things, as did he,” she said. “But it’s no surprise to me that we’ve circled back at this point and that he’s my person.”

Brandy said it’s no coincidence that she and her boyfriend met at Towson because the University embodies everything she loves.

“I love that students feel comfortable to come and talk to me just about life and what they’re going through, and I can do the same vice versa,” she said. “It feels real. It doesn’t feel fake. I genuinely think that a lot of the staff here want to build something deeper than just you here to get a service. We’re really here to help you make a memory and that’s something that will be with you forever.”

Ultimately, any relationship is based on listening, understanding, and demonstrating small gestures to show your appreciation for the other person, according to Brandy.

“I’m a firm believer in date nights,” she said. “I believe in setting time aside to talk to your partner and it not always be you venting at them, but thinking about the future, what do you love doing together, making sure you reserve your time…. You need time to really foster that relationship. It doesn’t happen overnight. But the more time you spend together, the more reasons you’ll realize you’ll probably be together forever if it works.”