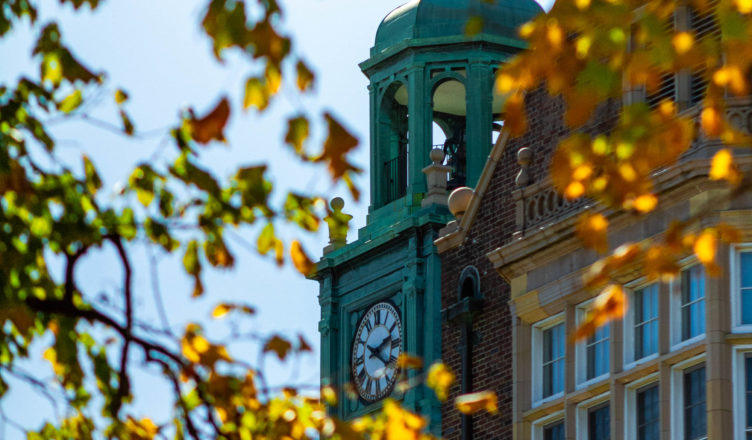 “The discussion was just a spin off things that students have asked about in various classes that I felt might be relevant to others,” said Shelley, who teaches graphic design at TU.

He said that many of his students have chosen to incorporate the topics of social change and activism into their thesis projects, and cited his own experience as an undergraduate student as having shaped his idea of what makes an effective message. A good hook, he said, is the first step.

“Find a hook, yes, but use whatever tool or idea or process that will interrupt people where they’re at and force them to pay attention,” Shelley said.

Shelley talked about his favorite hooks and how impactful they can be.

“My favorite hook comes from the #cocksnotglocks campaign at University of Texas, where students juxtaposed the absurdity of allowing guns on campus while carrying sex toys was apparently forbidden,” he added.

Images of the Texas protest were among the visuals presented throughout the talk, each with their own intent to captivate audiences. Photographs of a German exhibit called Freeze! revisited, where guests consumed popsicles shaped like handguns were presented, followed by a Peta advertisement featuring images of the Holocaust juxtaposed with ones from factory farms.

Shelley mentioned that he was always particularly struck by images of Israeli and Palestinian children throwing rocks at tanks, which he also shared during the talk.

“Chuck Palahniuk hit it square in Fight Club — it’s only after we’ve lost everything that we’re free to do anything,” he said. “The point is, in every instance of tank versus kid, the kid loses, but the kid also has nothing to lose, which means if the right people are watching, there’s the potential to gain.”

Psychology graduate student LaDena Eames, agreed that doing something is better than nothing.

“There are many people in the general population who could be doing more, and I think that our attention should be geared towards what we can do on a micro-level to create continuous change,” said Eames.

Eames’ role as a graduate assistant for Political Engagement and Community Outreach for the Office of Civic Engagement & Social Responsibility includes organizing the New York Times Talks, as well as other events that bring light to social issues.

Sophomore political science major Joan Maingi, who has attended the talks since last year, said she doesn’t consider herself an activist, although she currently phonebanks and canvases for the Democratic party and describes herself as someone invested in the political process.

“I don’t think I’m constant enough,” said Maingi,” who described the process of social change as “really slow and tedious.”

While she said she doesn’t feel that activism holds the same power that it once did, Maingi believes the process could be improved.

“Knowing what the goal is and how we are going to achieve [it], I really thinks helps activism out,” she said, adding that activism seems to be more effective at a local level.