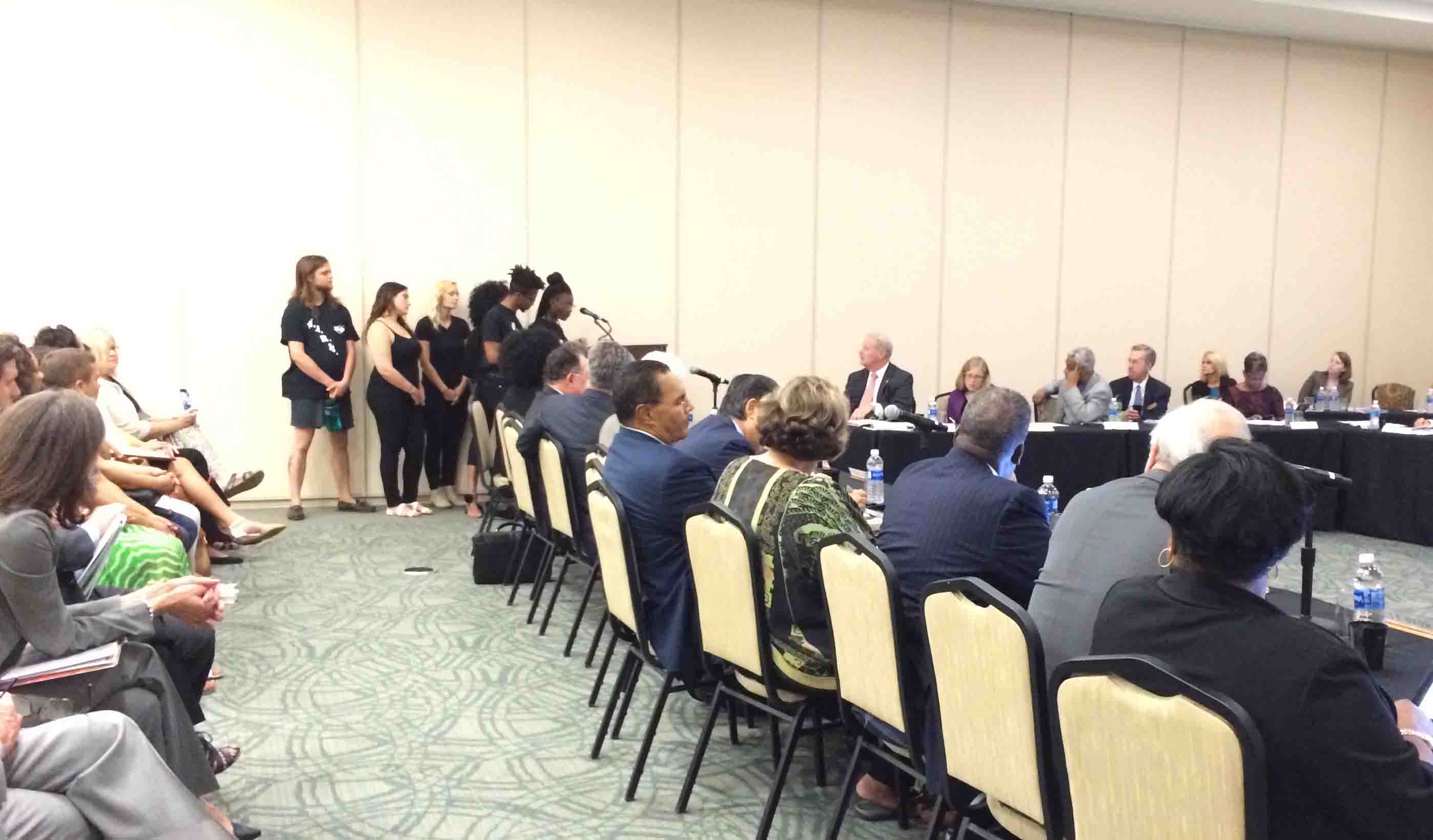 After speaking at Friday’s University System of Maryland Board of Regents meeting, some student activists have come forward saying university officials tried to talk them out of speaking at the meeting and warned they could face expulsion or even arrest.

“We weren’t welcomed,” student activist Bilphena Yahwon said. “I feel like it was a fear tactic.”

“We feel very strongly about [diversity initiatives], and we will continue to work in that direction,” Brady said.

According to Towson University Senior Director of Communications Ray Feldmann, President Kim Schatzel spoke with Brady and USM Chancellor Bob Caret Thursday evening to explain to them that the students wanted to speak.

Normally, anyone wishing to speak at Board of Regents meeting must submit a written request directly to the chancellor at least 48 hours in advance of the meeting, according to USM bylaws. Brady waived that requirement for this meeting of the board.

The students, including Yahwon and John Gillespie, another student activist, said they started getting messages and phone calls Thursday before the meeting, trying to talk them out of appearing at the meeting.

Vice President for Student Affairs Deb Moriarty said that once administration heard these students wanted to speak at the regents meeting, they were concerned with setting the students up for success.

“We weren’t in any way, shape or form sure that the regents were going to let them speak,” Moriarty said. “We did want to share with them the consequences. We weren’t trying to threaten them.”

Yahwon said she thinks the University has a fear of being challenged publicly.

“I think they feared looking bad in front of the regents,” Yahwon said.

Gillespie added that he thought the worry was about ruining the “posh” atmosphere of a Board of Regents meeting.

The students appeared at the meeting as members of the newly-formed group, the Organized Network of Student Resistance. ONSR formed in December, in connection to the student led sit-in of Towson’s president’s office.

At the meeting, they campaigned for greater diversity measures and urged administrators to diversify what they said are insensitively-named University buildings.

“From College Park to Towson University, our universities have chosen to pridefully advertise slave owners and white supremacists with statues, memorials and buildings,” Yahwon said. “This is an act of violence against black students.”

The buildings at TU that the students had troubled with are Carroll Hall and Paca House.

Charles Carroll was a signatory of the Declaration of Independence and later the first United States Senator for Maryland. William Paca was also a signatory, and later a governor of Maryland and a U.S. federal judge. The student activists have umbrage with the fact that both men owned slaves.

In Friday’s T3 electronic newsletter, a statement from USM Chancellor and former Towson University President Bob Caret described the establishment of a USM Diversity and Inclusion Council, which resulted from input gathered from all 12 USM institutions by a regent workgroup.

“This new council, with all USM institutions and constituencies represented, will carry this important work forward while maintaining open communication,” Caret said in the statement. “Using a data-driven approach, the council will develop and administer a ‘campus climate survey,’ inventory current campus activities, measure the actual impact of diversity and inclusion efforts relative to goals set, and establish accountability metrics.”

At TU, a committee of students, faculty and administrators are currently working toward naming the University’s first vice president of inclusion and institutional equity. According to a timeline projected by the University, the vice presidency will be announced in early January, pending unforeseen challenges. The University has also posted a diversity initiatives progress report, which details the measures taken thus far toward fulfilling the demands negotiated during November’s #OccupyTowson protest.

At the regents meeting, Yahwon called for Caret to work toward diversity initiatives.

–Sarah Rowan contributed to this story.