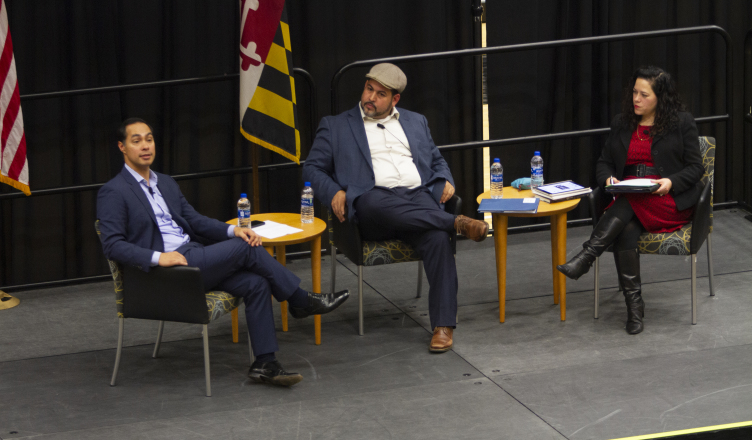 Julian Castro and Michael Benitez, Jr. came to Towson Thursday as part of the the Division of Student Affairs’ semesterly Diversity Speaker Series in SECU Arena at 7 p.m.

The series brings culturally relevant speakers, educators, activists, and entertainers to campus. This semester’s theme was “With Liberty and Justice For All,” and featured Castro, former Secretary of Housing and Urban Development (HUD), and Benitez, the Dean of Diversity and Inclusion and Chief Diversity Officer from University of Puget Sound.

Associate Vice President for Student Affairs Santiago Solis kicked the event off with opening remarks about the impact of the event.

“With many events of significance happening in our country and abroad, never have our lives been so interconnected to the experience of others across the world,” Solis said. “Tonight we explore what it means to engage purposely for the shared vision of liberty and justice for all of us.”

Solis introduced the student speaker for the evening, Jonathan Gallo, a senior majoring in Latin American studies and minoring in electronic media and film. Gallo is also a member of Lambda Theta Phi Latin Fraternity, Inc. and served as the president of the Latin American Student Organization (LASO).

Gallo applauded his parents for their hard work in building a life as United States immigrants.

“I began my experience at Towson University with a goal…a goal to graduate.” Gallo said. “But what I didn’t know was that I also had responsibilities for being a son who has to contribute to his family.”

According to Gallo, Benitez has written books that discuss student identity, hip hop culture, institutional research and supporting students and faculty of color. Benitez completed his Bachelor’s and Master’s degrees from Pennsylvania State University, and has a Ph.D in Educational Leadership and Policy from Iowa State University.

Castro became the youngest elected city council member in San Antonio history in 2001 at age 26. In 2009, he was elected mayor of San Antonio and became known as a national leader in urban communities, expanding education to the city’s low income students.

He recently released a book called “An Unlikely Journey: Waking Up From My American Dream,” which is a memoir about race and poverty in America.

Castro provided the first remarks by reminiscing on Apr. 16, 2014, the day he got the phone call from Obama about his interest in being the Secretary of HUD. At first, he was a little hesitant to take the position, because when he had previously thought about getting into public service, he had thought of serving as San Antonio’s mayor.

“A couple of days later, I told him ‘yes’ because I thought about all the tremendous opportunity the Department of [HUD] makes possible for families that are struggling in our country,” Castro said.

Castro acknowledged his grandmother and mother’s efforts in working to provide a better life for their families as immigrants.

“If we learn the lessons over the generations of our country is that equality, fairness, and the expansion of opportunity just doesn’t happen overnight,” Castro said. “It happens because there is always groups of people who are determined to fight and push to expand that.”

Benitez detailed his experience coming to New York from Puerto Rico, facing racism and xenophobia and Puerto Rico’s colonial history. He recounted leaving a youth detention center for the third time at 15 years old. He witnessed the disappointment from his mother, and decided to use the moment as a drive to go into education.

“It was at that time that I started to really get engaged in the community, already at age 15,” Benitez said. “When we step into spaces like academia, community and society, we don’t step in to create belonging, we step into things that [are] already ours.”

He had started to see his friends being mistreated by police and teachers, spurring his desire to become engaged in his community.

“Also having to confront stereotypes and prejudices that perpetuate the marginalization of oppressed communities, such as hearing ‘Where did you come from?,’ even though the Latinx community have been in the United States since the 1800s,” Benitez said.

“The issues that are going on today doesn’t have to be boring,” Castro said. “You can get involved by volunteering in campaigns, making phone calls to your officials, tutor other young people and educate them on these issues.”

Benitez hopes that first generation students, and all students, trust their brilliance.

“Step into unfamiliar spaces and own how they look in those spaces because nobody has seen them yet,” Benitez said.