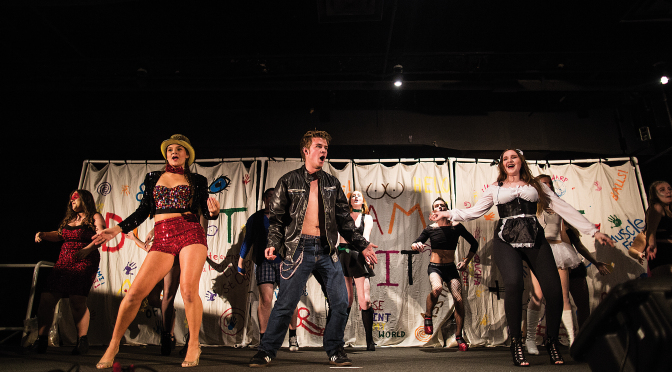 Paws Café was standing room only  on Friday for the Actors Anonymous’ production of cult classic “The Rocky Horror Picture Show.”

For the uninitiated, “Rocky Horror” follows main characters Janet and Brad as they explore their sexuality during a night in the house of mad scientist Dr. Frank-N-Furter. Throughout the night, they meet all sorts of zany characters and fall into all kinds of adventures. The musical comedy horror show infamously combines insight, intrigue and campy flair. Members of the group showcased their singing and dancing talents on stage while wearing feather boas and fishnet stockings. The backdrop was painted with the words “Don’t dream it, Be it.”

When Joshua McDiarmid, who played Frank-N-Furter, came on stage in a black crop top, tight black shorts, fishnet knee highs and heels, the crowd erupted in cheers and laughter. McDiarmid danced across the stage and posed as he sang “Sweet Transvestite.”

McDiarmid joked that walking in heels was not as difficult as he thought it would be but still challenging. His character was flamboyant and had to get intimate with Brad, played by freshman Daniel Rosen.

“I like the challenge of the costume and making sure I was comfortable as the character,” said McDiarmid.

The show involved a lot of interaction with the crowd. An actress in a gray hoodie rode through the audience on a scooter. Before the show began, ensemble members flirted with members of the crowd by sitting on their laps and chatting. Janet, played by sophomore Madelyn Dominiski, and Brad had a sex scene at the feet of the audience members in the front row.

During different scenes audience members heckled and made interjections, which are known as “call outs.” Every time Janet’s name was mentioned in one of the songs the audience would yell “slut,” and in another scene Janet said, “But my lips were hungry,” and someone yelled “which ones?” in response, which caused the audience to laugh.

During an intermission, Parker Durham entertained some of the audience by sticking a nail up his nose and then pulling it back out.

Actors Anonymous president Becca Altschul directed the show. She previously acted in “Rocky Horror” with Actors Anonymous in 2014, which inspired her to direct this year’s production.

“It was the most rewarding experience I’ve ever had,” Atschul said. “I got to be around the 20 most talented people I’ve ever met. I don’t have words to describe how beautiful this was.”

After the actors took their final bows, they started dancing and singing the “Time Warp.” Members from the audience rushed on stage to join them.

“The leads were really funny,” heckler and local high school senior Emily Granger said. “10 out of 10 for entertainment. It was a lot of fun to watch.”