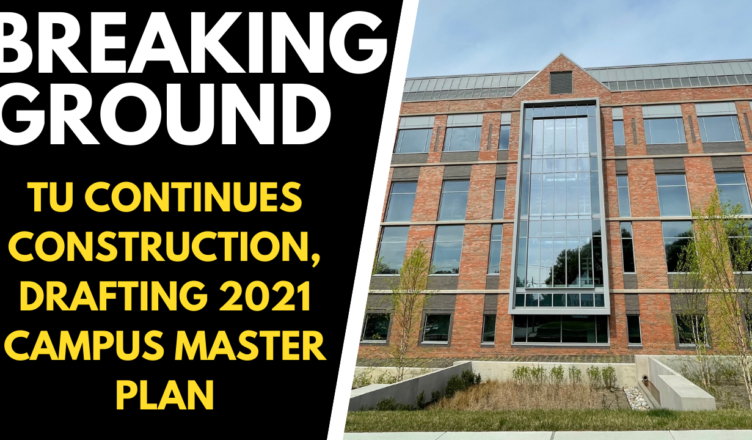 After reaching its five-year benchmark on its 2015 campus master plan, Towson University is gearing up to release an updated master plan in the fall of 2021. The master plan runs on a renewal period of 5 years to allow for continuous adjustment over time. In the meantime, the University will continue ongoing construction and is breaking ground on new projects.

In an April 20 press release, the University announced it will begin constructing a new building that will house the College of Health Professions (CHP) this summer. Maryland lawmakers “ … allocated $50 million to begin construction in fiscal year 2022, which begins in July” and funding for the project is approved through FY 2024.

“The support for this capital project and our College of Health Professions’ programming will directly benefit the people of our state,” TU President Kim Schatzel said. “As the largest provider of health professionals in Maryland, TU’s impact is significant. Now, our faculty and staff, with this first-ever dedicated building, will have world-class resources to support their teaching and research. This will be transformational for the college and its future.”

“I’m grateful now that we will have a building constructed for and dedicated to the health professions,” Lisa Plowfield, dean of the CHP, said. “Having our students, faculty and staff in a state-of-the-art health professions building will allow for more cross-discipline collaboration and a deeper sense of community within our college.”

The University partially opened the New Science Complex, located on York Road, during the spring 2021 semester. According to the website, the five-story building includes 50 teaching laboratories, 30 research laboratories, 50 classrooms and one outdoor classroom.

The University is still working to move equipment from Smith Hall to the New Science Complex, but will continue to integrate classes into the new building until in the meantime.

“It’s complicated moving fancy equipment, so there will be kind of a mixture,” Provost Melanie Perreault said.

Once the Fisher College of Science and Mathematics is fully departed from Smith Hall, the building will begin renovation.

“Once the new Science Building is complete, Smith Hall will be renovated to accommodate the visual and communications technology programs,” reads TU’s 2015 campus master plan. “Renovation of Stephens, Van Bokkelen, Burdick, Hawkins, and Psychology will help to consolidate academic space and complete the realignment of the academic functions and departments within the Academic Core.”

The University is also completing construction of The Union which is expected to open this fall. Schatzel says the renovation will “…modernize the central space for student life, which was built for a student body of 7,000 in the 1970s.”

Schatzel also explained that the $90 million renovations will give students new meeting and dining spaces and will complete the student district alongside Burdick Hall and Field. The New Union will include a 300-seat auditorium, a new food market including a Dunkin’ Donuts and an expanded Career Center.

Those interested in watching the progress of the Union can view the 24/7 live stream.