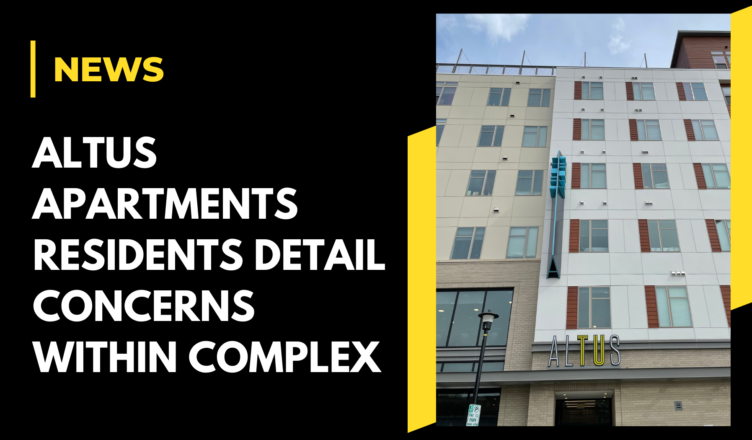 WMAR reported that several students within the building were experiencing rodent problems, March 1. The Towerlight obtained an email sent to residents on March 2 from the building’s management addressing the WMAR article, stating they are working to remediate the issue.

“Our community is in an area with new construction all around us, unfortunately nesting places for mice have been disturbed driving them to find a new home,” the email reads. “As we began to receive isolated reports of mice in our community, we expanded our pest control contract with Orkin to include multiple visits per month where each visit consists of the inspection, treatment and/or follow-up.”

Junior Elizabeth Forrer, who has lived in the building since August, says she has seen mice in her apartment and claims Altus has done nothing to address the problem.

“Our apartment has about 26 mice,” another student added. This student has requested to remain anonymous “And we have been extremely clean.”

The anonymous student says that while Altus has offered free extermination services including placement of glue traps, they haven’t closed holes in the wall created by the mice.

“While a very important focus for our on-site team, these are isolated occurrences and not a widespread issue,” Handfield said. “Since opening, our staff has received reports from residents which we have addressed using various control measures which are best in class in the property management business. These measures have been largely successful in eradicating the problem and our staff has consistently followed up with residents to confirm that they’re satisfied or continued to work with them to address the problem.”

Multiple students have also reported several instances of fire alarms being set off.

“There have been multiple occasions where something has triggered the fire alarm,” said Forrer. “People have pulled down the fire alarm and we’d be evacuated at 1:30, 2:30, 3:30, 4:30 in the morning.”

Several students also say there is an excessive amount of noise within the building. According to Junior Brittany Teufel, parties are a regular occurence.

“I understand I’m living in a student apartment complex and there’s noise every so often, but it came so excessive that the lights on our ceiling were shaking, they were vibrating and we could hear everything,” Teufel said.

Another claim made by students is that bodily functions were seen in the hallways and stairways.

“One time I saw probably the most amount of blood I’ve seen in my life, just all over the staircase,” Forrer said.

Teufel says there was feces outside of her apartment door.

“[The feces] was kicked around and rubbed all over the carpet,” Teufel said. “That actually wasn’t ever really cleaned up, it kind of dried up and sunk into the carpet. I’d say it was there for a good two weeks before it disappeared on its own.”

General Manager of Altus Apartments, Frank Axell, says the building uses camera footage to identify those responsible for any messes or property damage.

“We have cleaning crews seven days a week to keep our community looking its best,” Axell said. “Further, we work closely with residents and vendors to handle any isolated occurrences, which includes following up to keep everyone informed throughout the entire process. We think Altus is a fantastic community and want to do everything we can to make sure it stays that way.”

Another common claim among students is that of delayed responses to maintenance requests.

Hailey Thomas, a resident, claims that of several maintenance requests she has placed, two have received a response after she threatened to stop paying rent.

“The list goes on, the dishwasher flooded into my roommates room,” Thomas said. “They told us there’s nothing wrong with it.”

She also filed a maintenance request to repair her broken oven. Thomas says when maintenance arrived to inspect the oven, it was recommended she stop cooking.

Forrer and Thomas both say they have not enjoyed their time residing at Altus.

“It really hasn’t been great,” Thomas said. “It’s dirty and disrespectful and loud all the time.”