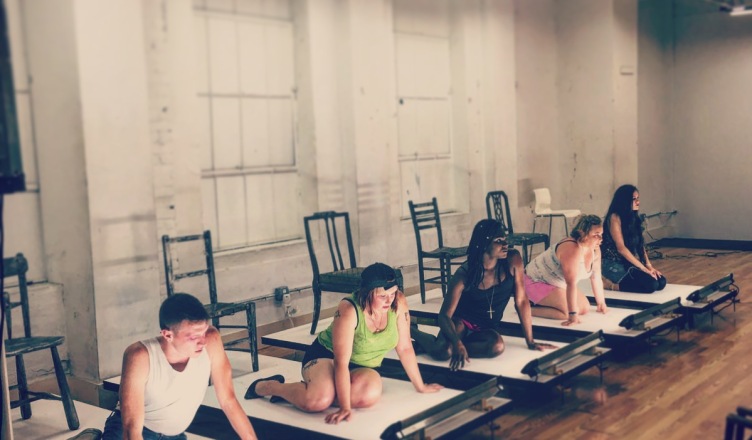 The Oven, in addition to being a Baltimore-based theatre troupe made up of Towson alums, is a social action group whose performances take on one of the world’s highest-grossing criminal enterprises. The Oven’s goal is to take an issue as big as sex trafficking and show audiences the human side of the multi-billion-dollar illegal industry.

The Oven was created by Jackson Phippin, a former theatre professor at Towson. He’d always been involved in theatre, but he started taking more of a “backseat” when his twin daughters were born, according to theatre arts alum Chelsea Blackwell, who graduated from Towson in 2013.

Once Phippin’s twins went to college, he was like, “all right, time to get back in the saddle,” Blackwell said.

“He’s always done politically-geared work,” she said. “I think he kind of just wanted to kick that back up again, and there were a lot of promising young students and graduates at Towson that he saw potential in.”

The first version of The Oven’s performance piece was called “Gone,” a full-length production they put on in January at the Baltimore Theatre Project.

Towson Class of 2015 alumnus Clifford Doby majored in criminal justice and minored in theatre arts. Doby said that several criminal justice professors saw the show and were immediately interested in bringing it to Towson, because it brought a more human and emotional side to the issue of sex trafficking.

“They thought the criminal justice students would really benefit from seeing something like that—everyone’s so interested in theory and making things rational and forgetting the humans behind the crime, the issues of justice,” he said.

Of course, when it came time to bring the show to Towson last May, they were faced with presenting a full-scale theatrical production in a lecture room of the CLA.

That’s how “Commodities” was born— as a bare-bones, minimalistic version of “Gone,” without all the trappings of a full-scale production, allowing them to take the piece anywhere.

“[Phippin] said, we can just strip it down and have five different people on tables, almost as specimens on display, and tell these stories and not worry about it being theatrical and having those very highly artistic overtones to it,” Doby said. “We found when we did it that way, it was much more impactful, much more authentic. I’ve never seen college students more quiet in a lecture hall in my life.”

In the performance, the actors use monologue to tell a story, “getting into the pathos of the work,” he said, in order to “touch the human spirit.”

While no one in the troupe themselves is a survivor of human trafficking, he said that they, and everyone, can still relate to dealing with trauma. By talking about what trauma is, and how humans viscerally react to traumatic events, the troupe was able to create a piece that is as authentic as it is relatable to audiences.

“What we do is take an issue and our goal is to frame it in a way that touches your heart,” Blackwell said. “What we really want to do is show the face behind the statistics.”

The Oven’s actors acknowledge that the work is often tough, since they put so much of their personal experiences into their performances to make them authentic and real. However, Doby says, working in theatre that raises awareness of important social issues is ultimately worth it.

“One of my favorite parts with doing “Gone” and “Commodities”…we met survivors themselves who came and saw the show and appreciated us and the company for putting that work on display. They said, ‘The most painful thing is that people ignore us and people ignore this issue.’”

Kat Kaplan, who graduated in 2013 with a degree in theatre arts, agreed.

“There’s so many people that we’ve been in contact with, just civilians who came to the show, and people have just been stepping up and trying to get involved with the organizations and I think that’s really great, that it’s able to work like that,” she said.

While Doby and Kaplan didn’t get involved in social action theatre until after they’d graduated, Blackwell realized her passion when she took a class called Theatre for Social Change her junior year.

“I had a taste of it in college and that was my first introduction to it, I even wrote my thesis about how important theatre for social change is,” she said. “I knew I wanted to do it, but I didn’t have the opportunity. Then one of the girls who was in this before came to me and was like, ‘let’s do it!’”

Kaplan suggests that any student or grad who’s interested in raising awareness of social issues theatrically while staying in the Baltimore area should get involved with the Oven.

“I feel like there are other theatres that touch on social issues, but I can’t think of anyone else who’s really devoted to getting into the issues and talking about them and spreading awareness,” she said.

Although the current troupe members don’t know exactly where the name “The Oven” comes from, their tagline is, “something’s hot, and we’re going to talk about it.”

“We make jokes all the time, like, ‘something’s cookin’!’ when we have a good idea,” Doby said.

While they’re taking a break from performing “Commodities” for a while, the Oven is currently devising a performance for the next hot topic they’ll cover—the fallout resulting from the 2016 presidential election.

“It’s kind of a reaction to the election, because how could we not talk about the election and be a social justice theatre group?” Blackwell said.

Although the piece isn’t entirely written yet, they intend to cover issues including women’s reproductive rights, cycles of addiction, sexuality, the institutional nature of race and how people cope with racism.

“We’re really proud, as Towson graduates and alumni, to be able to stay in the area that we graduated in and be doing work that is benefitting the community and giving back,” Doby said.