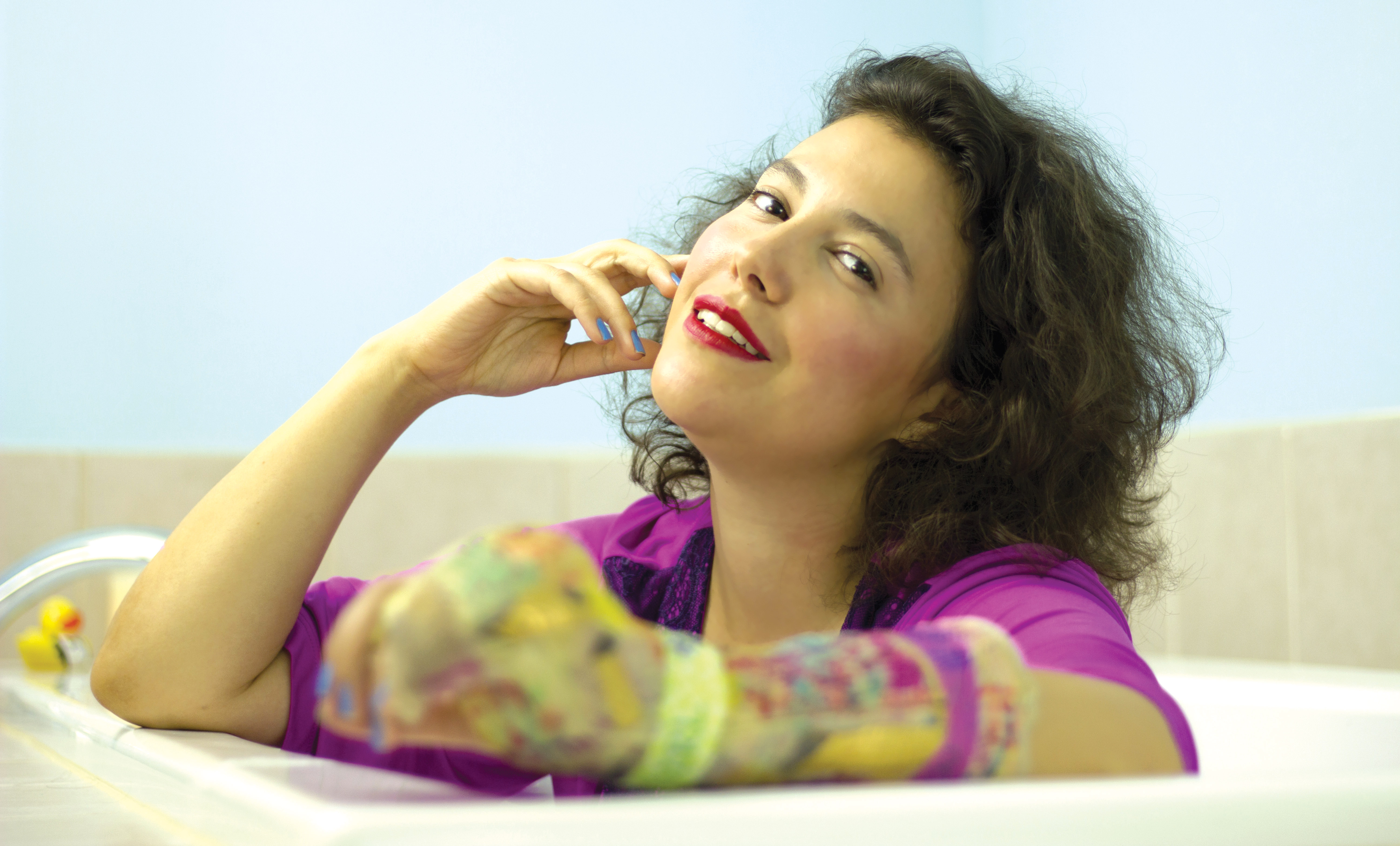 How does a person recover after a trauma?

This is the question that hangs in the (humid) air as I sit with about eleven other people in a stranger’s bathroom. Towson alumna Siobhan O’Loughlin opens her beautiful world to us in this room, soaking in the bathtub, surrounded by bubbles.

And by doing so, she invites us to look more deeply into our own lives and each other’s—the result is that, for an hour, you become bonded to a group of strangers in a way that eludes us in most everyday interactions.

Let me explain: “Broken Bone Bathtub” is O’Loughlin’s solo performance inspired by the aftermath of her (one of many) bike accidents in Brooklyn, during which she broke her arm.

Without a bathtub and unable to shower with her cast, O’Loughlin set out on what a friend deemed a “bathtub tour” of New York, borrowing her friends’ bathrooms. It was during one of these excursions that O’Loughlin had a thought: “What if I did do a bathtub tour?”

The resulting show is O’Loughlin’s first dive into immersive theatre, which by definition breaks the fourth wall to engage the audience in a way that spectators become part of the story.

In this case, we are O’Loughlin’s friends, offering her our bathtub for the evening. O’Loughlin punctuates thoughtful monologues with questions directed to us: Is there anything that makes you jealous? When was the last time you held someone’s hand? Have you ever made an uncomfortable phone call to your mother?

The answers are sometimes funny, sometimes raw and painful in their honesty.

“When people say big things and they cry, for me it’s just about listening,” O’Loughlin said. “Not to think of the right thing to say, not to worry what the solution is or what [they want] to hear, but just to listen and be present. Which I think is what we all need: People who ask questions and listen to those answers.”

If it was anyone else, I highly doubt the show would have the same effect—but O’Loughlin’s empathy, warmth and humor make it impossible not to want to connect with her and open yourself to the experience.

“I have three principles: charm, disarm, and listen,” O’Loughlin explained. “So I have this kind of opening monologue that’s very la-la-la, things in my life, my childhood, and that’s for [the audience] to realize [I’m] kind of normal and this is a normal play. That’s the charm. Then the disarming is when I ask people to wash my back and do these [physical] things and they’re like, ‘Oh that’s wacky, but it’s kind of awkward and funny too.’”

After premiering in Tokyo, “Broken Bone Bathtub” has toured in four different countries (on four continents). The show debuted in Baltimore last year as part of The Fringe, and returns this year in collaboration with Submersive Productions, a Baltimore-based collaborative arts company that specializes in immersive and experiential works, according to their website.

Glenn Ricci, co-artistic director of Submersive Productions (and bathroom host), heard about O’Loughlin on a podcast.

“We thought we were a good fit,” he said. “The immersive theatre audience, the fact that we have a ginormous bathroom on our third floor, and we’re called Submersive Productions—it just seemed like kismet.”

Also part of the Submersive Productions team was artist and Towson associate professor Amanda Burnham, who created an art installation for the piece. The most mesmerizing parts of her installation were the arms that covered the wall, reaching upward as we ascended the three flights of stairs to the bathroom.

“My interpretation of it is that it’s a complicated hug,” said O’Loughlin. “The arms are winding around as you’re going up but some of the hands are […] colors that don’t read as something comforting, so I think it’s addressing the different levels of emotions that come through with a hug.”

Although this is O’Loughlin’s first performance in immersive theatre, it’s not her first solo show— “The Rope in Your Hands,” written during her senior year at Towson, is what O’Loughlin calls a “docu-drama.”

She performed monologues as 13 different people she interviewed in New Orleans during a Towson-sponsored volunteer program. The show “breaks down racial injustice” and explores survival in the aftermath of Hurricane Katrina. O’Loughlin performed the show with Ferguson activists in St. Louis last summer.

Her second show, “Natural Novices,” also a docu-drama, is a “breakdown on gender issues [and] body issues,” centering specifically on female body hair.

After “Broken Bone Bathtub” ends its Baltimore run this weekend, O’Loughlin will be off to the Philippines to work on another project before heading to New York and then Chicago in 2017 for another bathtub tour.

“Broken Bone Bathtub” will run Friday through Sunday, Sept. 9 to 11. For more information and for tickets, visit www.brokenbathtub.com.