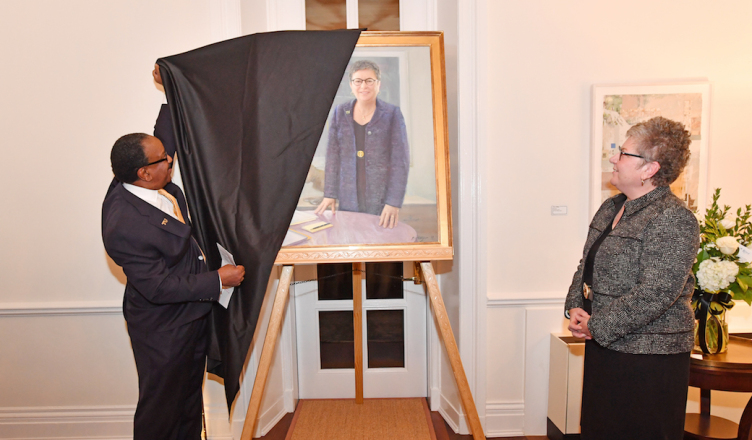 Dating back to the 1970s, the Towson University Alumni Association has commissioned a portrait for each president as a gift to them. Recently, TU President Kim Schatzel got her very own, and it has been unveiled.

Schatzel’s presidential portrait was unveiled Nov. 16, at a reception in the Auburn House, where it will hang alongside the portraits of previous presidents.

“We had lots of people in the community, both within the campus community as well as alumni as well as the business community, that came to the unveiling,” Schatzel said. “So it was wonderful to be able to have all the people that care so much about Towson and support the University to be there for portrait unveiling.”

For Schatzel, the most impressionable part of the unveiling was seeing her portrait as part of all the other portraits. For her, it was a humbling experience to have because she gets to add to the legacy left by previous leaders.

“We’re a 151-year-old institution, and when you take a look at the change and the transformation of the University from this very small 11 students that was a teacher preparation school, to this, and realize that each of those folks that came before me just did that.”

Ned Bittinger, a Santa Fe based portrait artist, was the artist that the Alumni Association commissioned to do the piece. Bittinger had previously done the presidential portrait for Bob Caret, who was Towson University President from 2003 to 2012 and is now the University System of Maryland Chancellor.

In order to do the piece, Bittinger flew into Baltimore from New Mexico to take pictures of Schatzel, one of which he would use to base the portrait on. The picture the two decided on was one of Schatzel standing, with some work papers on a table in front of her, and a replica of the tiger behind her. According to Bittinger, the portrait also features a painting done by a professor at Towson hanging in the background. The background painting was painted by art professor Trace Miller.

“I wanted her to look dynamic, like she’s very engaged in running the University,”  Bittinger said. “That’s why I chose to have her standing and, like I said earlier, to have some of her papers and folders that were on her table there just as they were I wanted to paint those in. I was delighted to find a piece of artwork, an abstract painting that was done by one of your faculty members to put in the background, I thought that would be another symbol, or a salute to Towson University and, you know, of course get the tiger in there.”

“It was a reaction of sheer pleasure quite frankly,” he said. “As we unveiled it, you know, it was written all over her face how pleased she was with how the portrait turned out. She was very impressed with it, and she was appreciative.”

Schatzel indicated the tradition being a way for University presidents to connect with Towson alumni.

“It’s a wonderful tradition, and that the Alumni Association has done this and commissioned this is just very special, and it creates a very special relationship that we have with our alums,” Schatzel said.

This story has been updated with the name of the professor who painted the painting hanging in the background of Schatzel’s portrait.