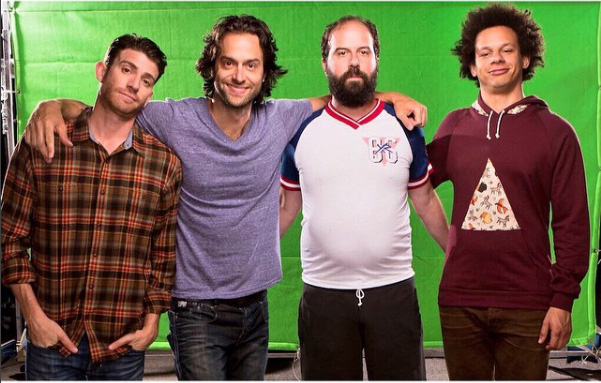 The movie revolves around Adam (D’Elia), a manchild who has a wake up call when his girlfriend (Jamie Chung) leaves him because of his fratboy-inspired antics. Adam decides to break up with his rowdy gang of 30-something-year-old bros in order to finally grow up and woo co-worker/romantic interest, Beth (Hannah Simone).

Castrone moved to New York to perform stand-up comedy shortly after graduating from Towson. He’s worked for MTV and was an associate producer on VH1’s “Best Week Ever,” while Levin attended graduate school at American University. The two started the sketch comedy website “The Post Show” with comedian and co-writer Zumwalt. By 2007, they had moved to LA and started writing “Flock of Dudes.”

The script is loosely based on Castrone and Levin’s own experiences.

“So many moments are either things we or our friends have said, or things we’ve experienced, or feelings we had,” Castrone said.

Unbeknownst to the writers, they would spend the next nine years working to bring the movie to life, running into obstacles at every turn. Imagine and Lionsgate studios would spend years developing the movie before Imagine pulls out and Lionsgate’s option expires, then take months to negotiate a payout. Things started to look up when Starz bought the movie, but distributors were evasive and, during the movie’s premiere at the LA Film Festival, the movie reel skipped minutes worth of scenes and lines.

“You think something is definitely going to happen and then it doesn’t. So many times I thought [the film] was completely dead,” said Castrone. “It was this project that we just wanted to fight for and were passionate about.”

“Flock of Dudes” is Castrone’s directorial debut. During production, he worked 18 hours a day while also writing for Comedy Central’s “The Burn With Jeff Ross.”

“People prepare you for [directing] to be difficult… but it was more difficult [than expected],” Castone said.

“Once we got Eric on board, other people just wanted to be involved, like Hannibal,” said Castrone.

Castrone is the head writer of Comedy Central’s “Not Safe With Nikki Glaser.” He and Levin have written a few feature movies and are waiting “to see what happens next.”

As for advice to aspiring filmmakers at Towson? “Pay your parking tickets,” said Castrone.

He added more seriously, “Just keep [making movies]. Don’t keep talking about it, just do it. It’s easy to get stuck in a holding pattern when you can just be doing and get better at it.”

“Flock of Dudes” is available now on iTunes and will be available on VOD Oct. 7.