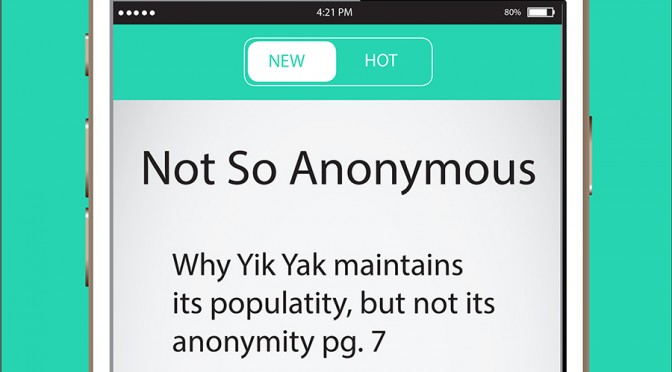 These posts are then upvoted or downvoted and can be commented on by other users. The higher the rating, the higher up on the list the post will be so users see it first.

However, students posting on the app may not be as anonymous as they think.

That information came into play in October, when a Towson University student, Matthew David Cole, allegedly posted on the app that we would be “Virginia Tech part 2.” The initial post read: “I plan on shooting up this f****** school on October 4th.”

Using the GPS coordinates of his phone, campus police were able to find and arrest Cole. He has been charged with one count of a threat of massive violence and one count of disturbing the operations of a school. His trial date is set for May 12 in the Towson District Court.

At the time, Cole said he had learned he wasn’t performing well in a jazz class and was worried his parents would pull him out of school if his GPA was too low, which is when he made the posts.

In a legal situation, the Yik Yak terms of usage said the app “may disclose user account information to law enforcement — without a subpoena, court order, or search warrant — in response to a valid emergency when we believe that doing so is necessary to prevent death or serious physical harm to someone.”

Cole’s case is the extreme, but every day, students are using the app to insult other students, fraternities, sororities and clubs on campus.

“We believe that it is a pervasive issue that is under-reported,” Spencer Bennett, assistant director of the Office of Student Conduct and Civility Education, said of cyber bullying on Towson’s campus.

“We have received some, not many, reports of students who have been sent threatening communications via electronic means, typically social media platforms such as Facebook, Twitter [and] Yik Yak.”

Austin Braswell, president of Theta Chi, a fraternity on campus that prides itself on an anti-bullying and anti-hazing policy, said in an email that “there was a period of time last year [when] our fraternity received a lot of hatred from anonymous users.”

Bennett said the Office of Student Conduct doesn’t receive bullying complaints often, but when they do the majority are for cyber bullying.

“In situations where students present information to us from anonymous sources such as Yik Yak or another online/social media outlet, we refer students to University Police or County Police to help investigate those issues,” he said. “…Universities have had success combating these troubling online outlets by … having students submit letters to site owners requesting [the content be] taken down.”

In an interview with The Towerlight last May, Yik Yak co-founder Brooks Buffington said the app wants to be known for its local communities and small radius that users can view certain posts before it’s known as an anonymous site.

“Anonymity is kind of the second part of it. But Yik Yak wouldn’t be the safe if it was just anonymous Twitter, it’s the location that makes it special,” he said.

Dr. Nancy Hensler, a practicing psychologist in D.C. and former employee of the Counseling Center at Towson, said anonymous social media apps have become more popular over time because “…you don’t have to see or hear the reaction of the victim of your jealousy or aggressiveness or maybe even warped playfulness.”

In her profession, Hensler said apps such as Yik Yak are nothing new. During the MySpace era of social media, websites such as JuicyCampus, a site that allowed students to post anonymously about various colleges and shut down in 2009, dominated the same kind of anonymous culture that Yik Yak taps into now.

In a case highlighted by the New York Times, a teaching assistant at Eastern Michigan logged onto the app after a class and saw that nearly 240 freshmen in the class had been openly mocking their professors during the course.

“…This app version is more frequent and/or potentially more damaging due to increased accessibility through smart phones,” Hensler said.

While it can be damaging, Bennett said it can also be difficult to find a perpetrator through the Office of Student Conduct if a posting is made on an anonymous site.

“Anonymous sources are much more complex and difficult to address. Our belief is that most students do not report issues until they feel the bullying has become pervasive and had a significant impact on their daily lives,” he said.

If a student feels that he or she has been bullied online or offline, they can contact the Office of Student Conduct at studentconduct@towson.edu and can submit an online report at www.towson.edu/ReportIt.