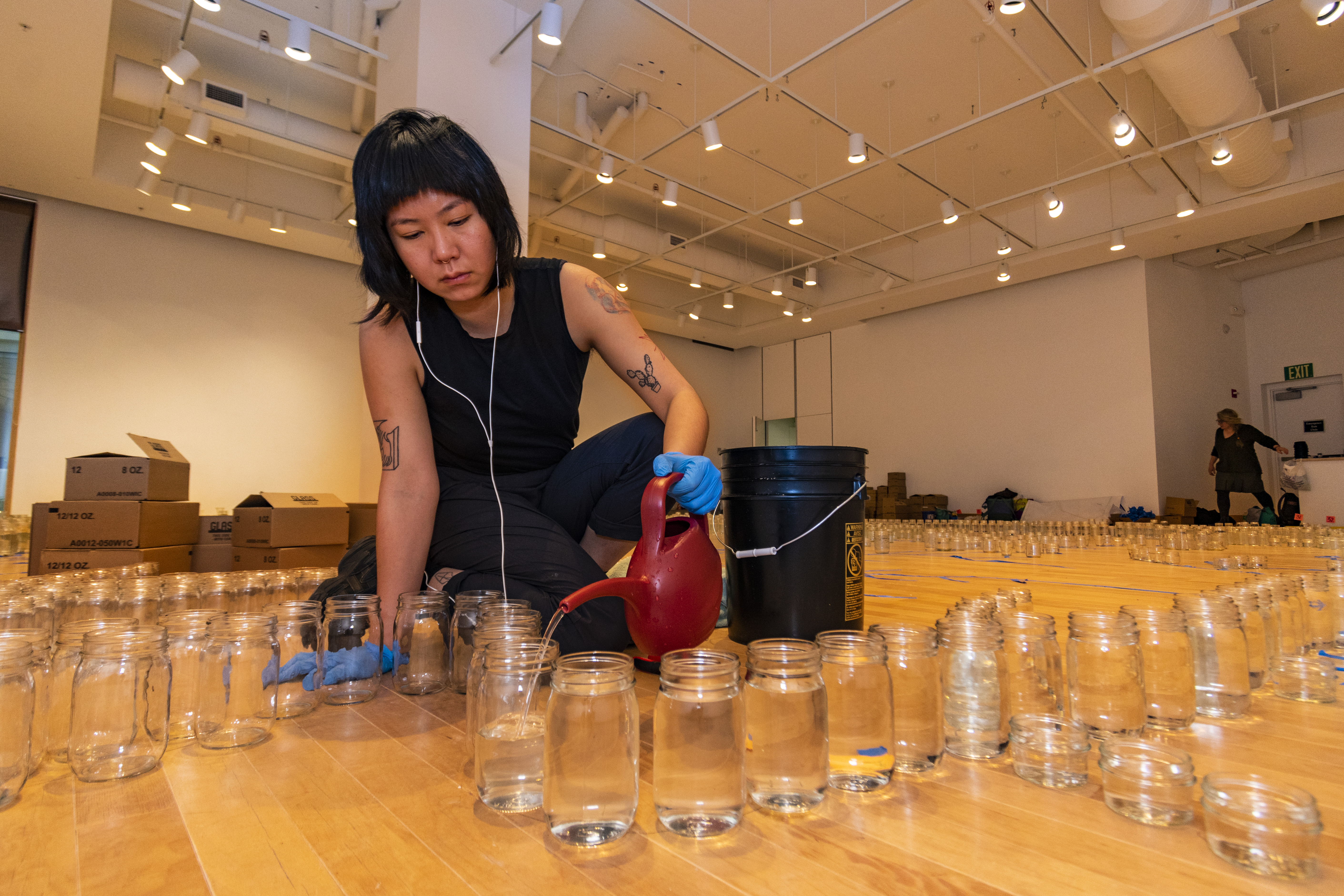 The Center for the Arts opened its first Arts Gallery exhibit of the decade, “Stacy Levy: Collected Watershed” by guest artist Stacy Levy, on Jan. 30.

This installation features thousands of jars of water placed strategically across the gallery floor in alignment with a map of the Chesapeake Bay watershed. Each jar is filled with water samples collected from its corresponding location.

“I took the watershed and I placed it into the gallery, trying to figure out how best to make it fit with both the impact of the Chesapeake, but also dealing with [the gallery’s] fire exits and things,” said Levy. “It’s not based on cardinal points, it’s tipped so that it works for this particular space.”

The Chesapeake watershed, the largest watershed on the Atlantic seaboard, spans 11,684 miles of shoreline, and is local to over 18 million people. According to the Chesapeake Bay Program, 80% of the tidal Chesapeake Bay is partially of fully impaired by toxic contaminants.

“My job is mostly to introduce people to all sorts of different types of water, and how it flows, and where it flows, and how it connects,” said Levy. “To bring people closer to water is something that has been very important to me.”

Levy shared that she views watershed maps frequently. She noted that the capillaries of the streams seem to resemble blood vessels, which then run across land and course through landscapes. Levy also noted that this dendritic pattern is recurring throughout all life forms.

“I do think that this intimacy with water, and getting to know the universality of that pattern is a very, very important way of reconnecting to the natural world, a connection that is often lost on us,” said Levy. “Stomping around the streams is a very good way to get that sense of your own pattern that’s flowing in your own capillaries inside, and to realize that the world is a sort of more unified place then it sometimes feels.”

Levy says that artists in general tend to create patterns which can link people to their inner landscapes of blood and neurons.

Erin Lehman, director of  Holzman and Center for the Arts galleries, worked alongside Levy to curate an exhibit that would be interdepartmental to the University.

“We felt that the intersection of environmental and biological sciences with fine arts was the perfect match for the interdisciplinary nature of the galleries, and TU in general,” said Lehman. “Also, issues surrounding water felt very relevant both in the Baltimore area and the world in general in this era of climate change. It is STEAM [Education] in practice. In other words, it uses art to get across scientific concepts, like the interconnectedness of waterways to the health of the Bay, for example, in a really immediate, visceral way.”

For the past two years, Levy has been collecting jars from a variety of sources. She ran a jar collection drive at Towson University, and she even thrifted some from Goodwill.

During her lecture, Levy also pointed out that one gallon of water weighs about eight pounds, and that the buckets used for collecting water samples, were five gallon buckets.

“So we’re hauling out just under 40 pounds after some spills out the top, everytime you haul a bucket, so there’s quite a lot of muscle work in this,” said Levy. “Then we loaded all of that water into cars and vans after carefully labelling them. This stuff becomes like fine wine when you go down steep slopes and down into mud and then haul all this water back. You want to know what water this is and not lose the label.”

This exhibit is the result of an interdepartmental effort. While Levy and some volunteers collected water, students from the Department of Music joined to record the water, and Susan Gresens, a professor of  aquatic ecology from TU’s department of Biological Sciences, has been continuously conducting research on the water samples collected.

“[Gresens] really brought the scientific end in and they were gathering data on water quality which we continue to do in every sample that we collected,” said Levy. “We also sampled it for conductivity, which means how much salt, or road salt, is in it. And we were taking samples of algae, too, to see what was swimming in the water.”

Upon returning to campus with water in tow, the team created a water pantry, where Gresens continued to test samples for pH and conductivity, and Abby Minor, Levy’s assistant, mapped out the watershed on the gallery floor.

“We lay out the forms using plastic chain from Walmart and painters tape to lay out these patterns, because if you get it wrong, you end up with streams crossing over each other which they don’t do,” said Levy. “Then, carefully, very carefully, otherwise we would have flooded the gallery, [we filled] the jars with water specific to each tributary and had to keep that straight.”

Levy noted that the Office of Sustainability was intrepid and very supportive of her work.

“Clean, healthy water is essential to our existence, and it’s a limited resource,” said Patricia Watson, Assistant Director of Sustainability. “By taking care of the watershed we are also taking care of ourselves and our community for generations to come.”

The title of Levy’s lecture, “Art is a verb,”  held a significant meaning towards the work Levy completes today.

After Levy’s lecture, attendees were given a first look into the completed exhibit.

“I think this exhibit is cool,” said freshman Michelle Lin. “It’s showing me how much water surrounds me, I didn’t know there were so many streams and bodies of water [so close] to me.”

Other students expressed interest in the scientific aspect of this exhibit.

“I love how it ties in science and art, there’s not only this scientific aspect to it, but the art ties into this beautiful thing,” said freshman Natalie Miller.

The exhibit “Stacy Levy: Collected Watershed” can be viewed now through April 25 in the Art Gallery located within the Center for the Arts. You can also learn more about Stacy Levy and her environmental work on her website.

– Grace Hebron and Grace Coughlan contributed to this article. 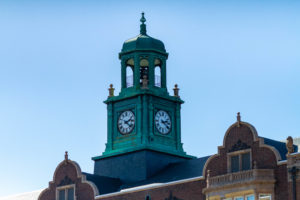 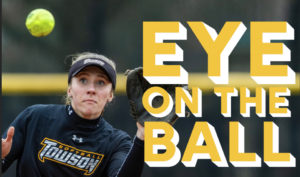