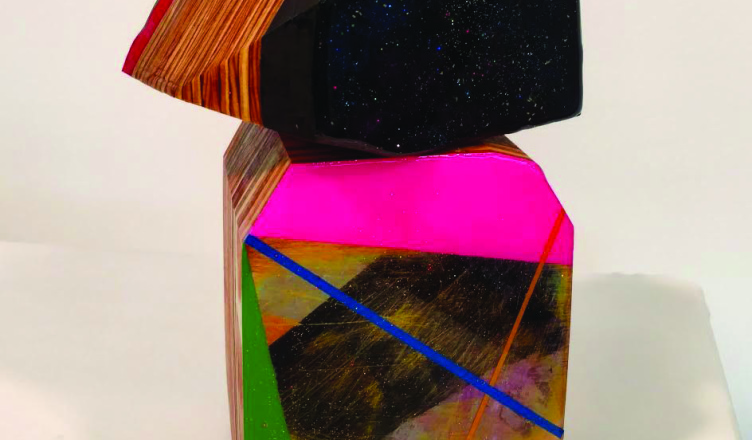 Emily Dierkes graduated from Syracuse University with a bachelor’s degree in painting, the medium she thought she’d continue to explore for the rest of her life. Now, a third-year interdisciplinary artist and MFA candidate at Towson, Dierkes is experimenting with patchwork, sculpture and silkscreens — art forms she’d never previously imagined.

“They had me signed up as an interdisciplinary artist and I was like, ‘I’m not, I’m a painter, why does it say that?’” she said. “I’m a painter, and pretty soon I was making sculptures and installations and working with all kinds of stuff.”

Since coming to Towson, Dierkes has made it a priority to say yes to everything. She was inspired by other MFA students who took full advantage of art department programs, and she kept herself open to suggestions from her MFA committee.

“Busy Work,” Dierkes’ senior thesis show, will be on display in the Holtzman MFA Gallery from Feb. 10 through April. While “Busy Work” will showcase several of her paintings, it will also include Dierkes’ sculpture pieces, screenprints, a floor installation and a fabric installation to display of her growth as an interdisciplinary artist.

The fabric installation involves a number of patchwork lines made up of colorful patterned quilt squares, each individual square hand-sewn to the next and each line made up of 58 squares, in honor of Dierkes’ mother, who recently passed away from cancer at the age of 58.

Dierkes’ mother was a teacher, quilter and sewer who left her daughter with boxes of fabric leftover from the 1970s and 80s, along with a copious amount of sewing machines and glue guns. One afternoon, Dierkes began absentmindedly sewing patterns together while watching “Law & Order: SVU,” and when she stopped sewing and counted the squares, she found she had sewn 58.

“I was like, ‘Whoa, that’s crazy,’” she said. “[The installation] kind of might not make sense because it’s so colorful and cheery, but it all has to do with my grief.”

The show’s title “Busy Work” comes from the idea of “women’s work,” or women keeping busy with feminine crafts like sewing and embroidery while their husbands work during the day.

“A lot of what I’m doing is to keep busy for grief purposes, but also a lot of the work I’m doing is kind of this mindless work that I can do while I’m doing other things.”

Dierkes will also display painted sculptures: glittery, multi-layered blocks sealed in epoxy resin that give off the illusion of space and look like tiny, stackable gems. Dierkes has already brought the sculptures to several art shows, where she allows viewers to touch the blocks and move them around.

At one local art show, she saw two young boys eyeing the blocks and gave them permission to play with them. The boys, sons of adjunct art professor Sam Lacombe, arranged the blocks into one large display. While the boys’ display was different than how Dierkes had arranged it, she enjoys giving people options and seeing the variety of sculptures that can be made.

“I give permission to people, like, ‘You can pick it up, you can touch it.’ And people’s faces change when you say that, like, ‘I can touch it?’ Because people are used to being like, ‘No, no, it’s fragile,’” she said. “There’s something really beautiful in giving permission to someone, so they can really spend some time with the object.”

While Dierkes hadn’t initially considered a state school when applying to MFA programs, she was impressed with Towson’s professors, many of whom also teach at Maryland Institute College of Art (MICA), the abundance of art tools and equipment and the community feel of her program. Since choosing Towson, Dierkes has branched out thanks to inspiration from her fellow students and department personnel, especially professor Amanda Burnham.

“I’ve been able to work with a lot of professors with a lot of different viewpoints. I haven’t only listened to the painting teachers or whatever,” she said. “On my committee I have a printmaker, a digital artist, a painter, two sculptors. I really like the way that Towson hooks you up with different types of artists and kind of allows you to find yourself.”

Dierkes, in addition to being a full-time student, is also an art and English teacher at her alma mater, Roland Park Country School.  She began her MFA program thinking that a master’s degree would help her attain her dream job of art teaching, but Roland Park offered her the job soon after she enrolled at Towson.

“There are some artists who are like, ‘I never want to teach,’ but I know it was always in the cards for me. It’s in my blood,” she said. “Also, as an artist to have a steady gig with health insurance, it’s amazing.”

An added bonus, she said, is teaching AP Studio Art and helping the young women in the class grow as artists.

“I’m really happy to be teaching young girls at a time where things are in the balance, we don’t really know what’s going on,” Dierkes said. “It’s great to be able to teach strong, independent women.”

For struggling or self-conscious artists, Dierkes recommends the book “Art & Fear: Observations on the Perils (and Rewards) of Art Making” by David Bayles and Ted Orland.

“Enjoy the process. Have fun doing whatever you want to do and don’t pigeonhole yourself. Make a lot of friends who do what you do and make a lot of friends who don’t do what you do, and talk to them, and ask them questions,” she said. “I think this is a really great place to be an artist — and be anything, really — but I think there’s a lack of pretension that’s really nice, and I’m glad I decided to stay here. This is a great town to invest in and stay and make work and give back.”