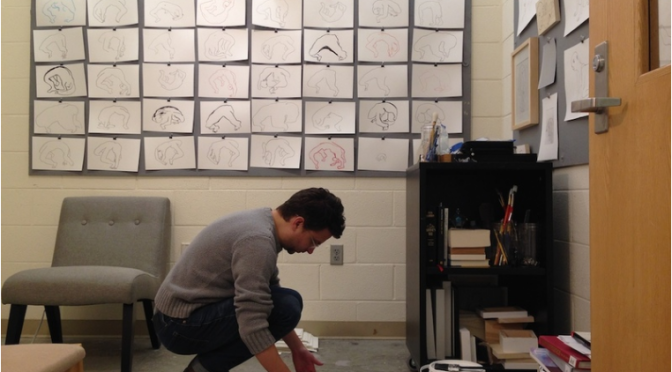 If we’re living in a post-medium era, wherein artists are no longer relegated to creating work with a singular medium, then professor, administrative coordinator and artist Sidney Pink can’t be boxed into just one artistic discipline. He’s not just a dancer or a drawer—all of his work is integrated, and the process is just as (if not moreso) important than the finished piece.

Pink is a Baltimore-based intermedia artist who works as a part-time Towson professor and administrative coordinator for the Department of Dance.

“All of my roles here are interconnected,” Pink said. “That’s the funny thing about our society, and I think especially in an institution like this, is we have these titles, like you are the student, you are the staff member […]and I’m in a place right now, in my life where I’m flowing between these, and they’re all helping and connecting each other.”

Pink’s background in dance and experience as a visual artist have allowed him to combine movement and drawing into what he calls “sound drawings.” Pink places a contact mic under the paper, which picks up the vibration of his drawing. As he moves the pencil around the paper, adjusting the pressure of the pencil and the levels of the mic as he goes, the resulting work is a “record of the sound.”

Pink also creates sound drawings by layering, which involves using a looper effects pedal to record different sounds in real time, and playing them over each other as he draws.

“The first thing I’m thinking about is the quality of the sound, but what’s interesting is I would never have created this drawing if I was just thinking about it as a drawing,” Pink said. “Because I started with the sound, it allowed me to approach the mark-making in a different kind of way that I normally wouldn’t have thought of. I work with dancers, and even though this isn’t obviously dance, in some ways, in my mind, my movement is just as important as all the other elements that add to the whole.”

Pink suspects that his work is unconsciously influenced by eastern ways of thought, like Zen, and Butoh dancing, a practice he became more familiar with during the four years he and his wife lived in Tokyo.

Butoh dancing, Pink explained, was an avant garde reaction to Western and Eastern styles of dance in the 60s.

“It has a lot to do with embodiment, using different kinds of visualization to create movement,” Pink said. “I’m not using those techniques directly in this work, but I think there’s definitely influences there.”

The Zen influence has more to do with Pink’s mindset as he creates his sound drawings.

The concept of sound drawings came about as Pink and some dancers worked in a Towson studio, bouncing ideas off each other. It began with the notion of blind contour drawing—looking at the  subject, not the paper, as you trace its image—and evolved into the artist closing their eyes to draw the dancer, relying only on a collaborator’s touch to “see” the movement of the dancer.

“If somebody over there is dancer, and I’m the drawer here with the paper and pencil, and there’s somebody behind me looking at the dancer and touching my body, it’s through that touch that I receive information and decide how to mark the paper,” Pink said. “We started to realize a lot of what we were doing was about how you translate different kinds of art forms. I’m interested in like, how do I capture the feeling of the dancer, the feeling of the sound on paper and drawing.”

The free festival occurs around September in Station North, and has involved about 28 local dance companies. The idea is that audience members can walk all over the neighborhood and “discover dance in unexpected places.”

Currently, Pink is working on a performance art piece for the EMP Collective in Baltimore, that will incorporate his sound drawings and dancers over the course of a weekend.

“I’m hoping to break down those kind of performance norms,” Pink said. “I want to create a space where the audience can come in and have an experience.”