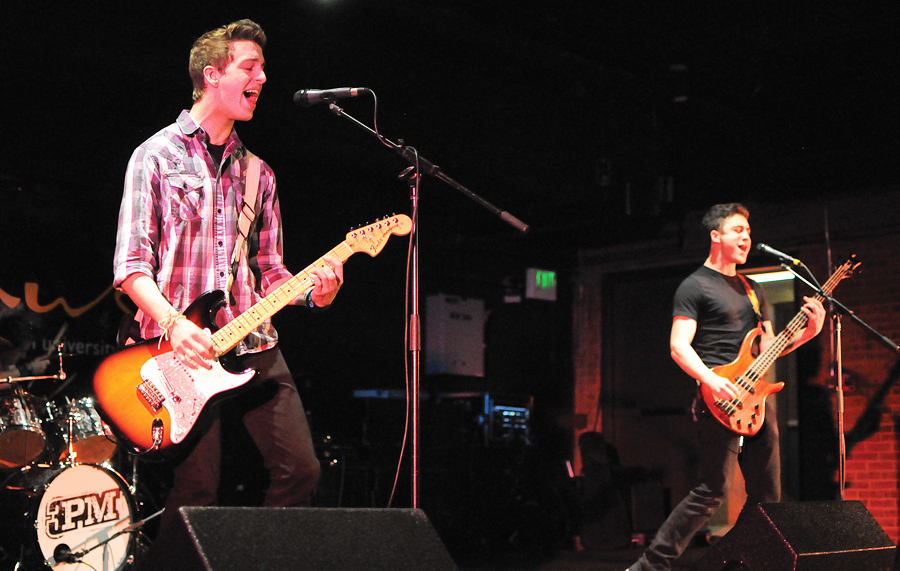 It has been four years in the making but the rappers of Hear No Evil (HNE) finally made it to the Paws stage.

“We actually heard about it freshman year and we thought this would be a great thing for us to do, but we were never ready for it,” senior and member of HNE Emmanuel Duru. “So this year was blessing, we all had our stuff together.”

Duru and his rap group were chosen among several other Towson artists to compete in the annual Battle of the Bands concert hosted by CAB on Friday, Feb. 13.

On Friday night, the Campus Activities Board hosted its own version of Battle of the Bands called Bring the Noise.

“It’s a community gathering of sorts, all these Towson students and their perspective groups submit to be considered for this opportunity to play at the show,” sophomore programming chair Jared Weiner said. “Obviously there is a want for these student groups and their acts, to showcase their talent in front of the Towson student body, so it enables them to do that.”

The competition, located in Paws, allowed bands, rappers and DJ’s to show the judges of the event and the Towson community the talent that they possess in order to win the opportunity to perform at day one of Tigerfest this spring.

The competition featured a variety acts such as, bands 3PM and The Regulators, DJ’s Camo and MattGHolden, singer Hunter Hooligan and rappers HNE and Khalaezzy Game.

Weiner said that the artists had to submit a press kit in order to be considered for performance at Bring the Noise.

“[It] included their music, all their social media links, [a] brief bio, explaining who they are, what they have done already and why they should have the opportunity to compete at Bring the Noise and potentially Tigerfest,” Weiner said.

The Regulators and 3PM had other goals for their respective performances.

“This will be the first time performing in the state of Maryland,” junior and member of The Regulators Carlos Melendez said. “We usually perform in South Jersey and Philadelphia.”

The Regulators, who brought a mixed style of rock and gospel music to the evening, said that they would love to gain new fans in the Towson area.

“We are trying to up our game up more on social media, just to branch out,” Melendez said.

3PM, who performed at Towson last semester for the Welcome Back Concert, said that the band has grown since they began working with their manager last December.

“Slowly but surely, we are legitimizing ourselves in the Baltimore music scene,” bassist and lead singer Brennan Stark whose bandmate Brandon Millman is a student at Towson said.

Artist Hunter Hooligan (Hunter Warch) said that although he primarily performs pop music, his interests in other genres has changed overtime.

“I’ve been working in studios and on music since I was thirteen, and in that time, there has a lot change,” Warch said. “The process has changed, the content has changed, in ten years, everything can change.”

Warch also said that he feels lucky to have parents who played a wide-range of music in his childhood. As a result, he said that the variety helped him to develop as an artist.

At the end of the event it was announced that MattGHolden, 3PM, Hunter Hooligan and HNE were all chosen to perform at the first day of Tigerfest.

Not only were most of those performing newcomers to the Battle of the Bands event, but some in the audience were as well.

Weiner said that the event was an opportunity for Towson students in their friends to come out and enjoy a night of free music.

“It lets them support the local music scene,” Weinder said. “I just think it is a good amount of Towson coming together, listening to some good live music and see what the first step in planning Tigerfest day one is.”