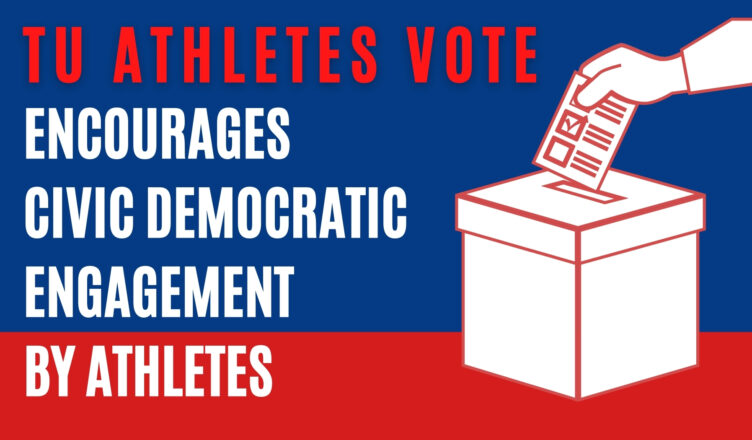 During a time of information overload and media saturation, TU Athletes Vote uses social media and other community events to provide students with information about the voting process.

The non-partisan initiative was founded by the Women’s Basketball Associate Head Coach and Recruiting Coordinator, Zach Kancher, and focuses on educating Towson’s student athletes, coaches and administrators about voting and voter registration.

“The idea that I had was to create organizations that would cut through a lot of that noise and provide simple, accurate and clear information about the voting process and about this particular election,” Kancher said.

Kancher described the goals of the student-driven organization as threefold. They seek to  ensure that 100% of student athletes are registered to vote, educate TU student athletes about the voting process and increase community engagement.Towson University Athletics teams can place a representative on the TU Athletes Vote committee to increase involvement across all programs.

Representative on the committee Nikya Mitchell, an athlete on the Women’s Volleyball team, relays important messages from the organization to her team and helps to ensure that they fulfill the expectations that they’ve set for themselves regarding civic and democratic engagement.

“This year’s election is really important and I just want to stress that to people I know,” said Mitchell. “People really think athletes are detached from life and that we’re so invested in our sports, but it shows that we care about things that are so much bigger than us, and I’m really proud that we could actually make that name for ourselves in Towson.”

LaKaitlin Wright, a student athlete on the Towson Women’s Basketball team, has been heavily involved in the organization since its inception.

Since, Wright has gone on to help the organization with various other initiatives leading up to the election.

“I’m most proud of teaching and letting athletes know that their voice matters and that it needs to be heard,” she added.

Wright noted the importance of letting young voters know that they can make a mark in a  monumental way in the upcoming election.

“We can make decisions that will impact us in the future,” Wright said.

“I think a lot of people in the age group of like 18-25 just choose not to vote out of convenience,” Catalano said. “So I think it’s very important that we reach out to them in particular because their vote does matter, and I think a lot of them feel that it does not.”

TU Athletes Vote held an event with a panel to engage athletes more in the process of voting.

“We actually did a like town hall type meeting very early on in the semester,” Catalano said. “I got to participate in the panel for that and I thought that was just an amazing experience. There were over 100 athletes that came over Webex and watched it and got to ask questions and understand voting a little bit better.”

With regards to future directions for the group, the student athletes and Kancher share aligned visions.

“I think that we can branch out and talk to different clubs and get them involved in voting and get them educated about the importance of being a voter,” said Wright. “It’s not just about the presidency but also the other elections that come up.”

Catalano stressed the importance of getting young voters excited to vote not only in the 2020 presidential election but also in future elections to come.

“It is an exciting thing to finally be a part of. Personally I feel like I’ve been waiting to vote since I was eight,” she said.

In addition to TU Athletes Vote, Kancher also began the Student Athlete Voter Engagement (SAVE) Alliance, an external organization that shares the same goals as TU Athletes Vote but with a focus on college communities across the U.S. By speaking with college athletic organizations and coaches beyond Towson, Kancher helps engage student athletes and the athletic community on a national level.

One of Kancher’s long term goals is getting the NCAA to aid in the civic education of athletes.

“I’d love to have the NCAA require four years of civics to be required courses to be eligible to play college sports,” said Kancher. “I think the requirement would force student athletes to become more invested in democracy. The best, most functioning democracies are the ones that everybody takes part in.”