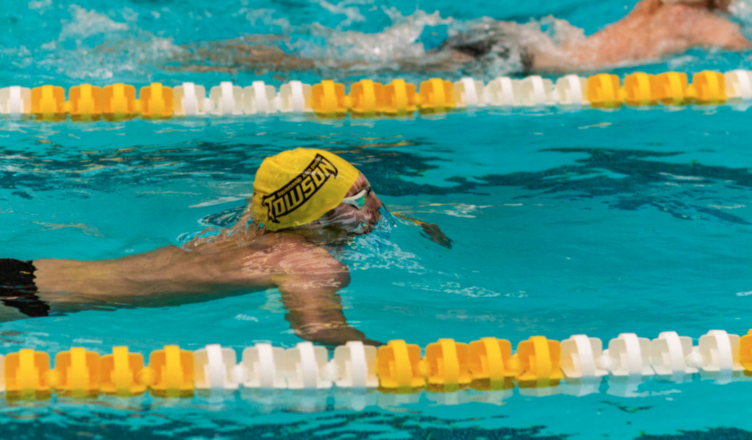 Despite the challenges of competing during the COVID-19 pandemic, Towson University’s (TU) Athletic Program has found success through their teams and their players, including two Colonial Athletic Association (CAA) championships from Men’s Swimming and Diving team and Women’s Volleyball team.

A total of 17 sports teams played during the spring 2021 season, after multiple teams faced season postponements due to COVID-19. While spring sports teams were able to play during their regular season, several fall sports teams including volleyball, soccer, field hockey, and swimming and diving adjusted their seasons to this spring.

Despite facing an oddly timed season, the men’s swimming and diving team won their first CAA championship, and the first conference title since 1982.

One challenge the men’s swimming and diving team faced was training. Shrum says when they started there could only be one person in a lane. Eventually roommates were able to swim together, then finally swimmers were permitted on opposite ends of the pool.

“The biggest challenge of any season, especially this year, was getting as much as you could of the workouts,” Shrum said. “Everyone was dealing with so much every day, our kids did a great job of using the pool as a getaway and just focus on swimming and not worrying about how [COVID-19] was impacting them.”

Freshman swimmer Brian Benzing, who was recognized as the Most Outstanding Performer in the CAA championship, also said the lack of time in the pool was a challenge. He also mentioned the difficulty of having positive COVID-19 cases on the team early in the season.

“We had a rough start but once we buckled down and made sure no one was seeing anybody our cases stopped occurring and we were able to get consistent pool time and training time in,’’ Benzing said.

In the CAA championship Benzing set two records, in the 100-yard breaststroke in the preliminary round and final round. He also led off the 400-yard freestyle that the Tigers won by more than four seconds.

The Tigers went 3-1 on the season, with their loss coming against Navy 188-100. They won their final three regular season meets against Loyola University, Mount St. Mary’s University and the University of Delaware.

“Being able to say we had a successful year means more this year than in prior years,” Shrum said.

TU’s Women’s Track and Field found success after the cancellation of their 2020 season. During their season opener at the University of North Carolina Wilmington (UNCW) Invitational, the Tigers won seven individual events. The team went on to win the Towson Invitational with 79 points.

“We’re not happy with the overall outcome but proud of the efforts the team put in,” Jackson said in a press conference. “Grateful to have had the opportunity to compete in such an uncertain year.”

One of the challenges the TU Volleyball team faced was adjusting to playing in the spring instead of fall. Despite this, the Tigers won their first four games, sweeping three of them.

“Definitely a completely different season than we’re used to seeing as how coming into the fall we normally play our games then,” junior outside hitter Emily Jarome said. “But along with the challenges gave us a better opportunity to develop as a team.”

Towson’s last regular season game was on March 7 vs. Delaware. They did not play again until April 2 in the CAA tournament against the College of Charleston. Despite the lack of games played, the undefeated conference record earned the Tigers the top seed in the CAA tournament.

“It was extremely difficult because along with knowing we couldn’t play the games scheduled it left a big question mark on to whether we’d be able to continue the season after those games,” Jarome said. “The tournament would be right after when our quarantine was up. So it was a waiting game to see if we’d actually make the tournament.”

Head Coach Don Metil said after the first week of quarantine most of the team was negative and could do individual practices for one hour. He said unlike a sport such as basketball it’s harder for players to regain their ability quickly.

“It’s incredibly hard in a sport like volleyball where you depend on other people to help you with your skillset,” Metil said.  “ … We did what we could during that time, we were able to get one team practice before the tournament and we tried to prepare the best we could.”

Despite the challenges faced this season, the Tigers overcame them and won the CAA again. Towson is the first back-to-back CAA champions since James Madison in 2016 and 2017, and Jarome said it reflects the bond of the team.

“It just showed how strong as a team we were because we had those setbacks before the most important time in our season,” Jarome said. “So coming together after not practicing for two weeks showed all our hard work in the preseason really paid off for us. Our confidence in each other and hard work was all we needed to get the job done.”