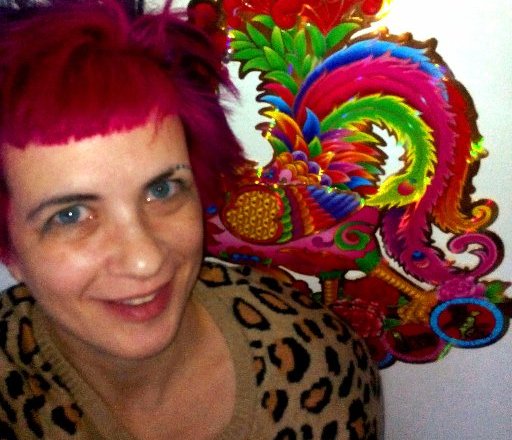 Author Violet LeVoit is a Baltimore-area native currently based in Philadelphia. She graduated from the Maryland Institute College of Art but describes Towson University as her idea of, “this is college.” She said that despite never attending Towson, her summers spent doing workshops on campus were formative. Her newest work, “I Miss the World”  — an “experimental noir” novel — was published in October 2016.

MG: Can you tell me a little about the organization you were part of, the Towson-Glen Arm art youth movement?

VL: Stuff like that is what happens in a world without Internet, with bored, smart kids in the suburbs. That was happening in every pocket of every city across the United States… 20-30 bright, interested kids. It was either that or do drugs, and we didn’t want to do drugs, so we started… just making art and doing things… At the time I knew this was special. It wasn’t just [time] with friends, we were doing something.

MG: Can you tell me a bit about “I Miss the World”?

VL: The book is about a brother and a sister who meet one afternoon in LA’s Hollywood Forever cemetery, which is where a lot of stars are buried, and they have a long talk about their childhood and what they remember. Slowly, while the conversation goes on, you start to realize that something very, very terrible has happened… It was an interesting book to write, because it was essentially 40,000 words of a conversation. [I was] deeply influenced by an author named Nicholson Baker, who wrote… this book called “The Mezzanine” and the only action in the story is that a guy steps on the bottom of the escalator, and arrives at the top. The full text of it is what he’s thinking about as he’s on the escalator—why he’s at the mall, why cut a sandwich on the horizontal instead of the diagonal… Reading this I thought, “What an amazing way to write a novel.”

MG: How did you come up with the title?

LV: “I miss the world” is spoken as part of the conversation. Two or three years ago, my grandmother died, and her loss was tremendous to me. It really got me thinking about one half of my life in which she was alive, and the other future half in which she’s not going to be there. Reflecting on how I have reached that point where I’m kind of the crotchety old person who says, “Oh these new-fangled phones, why can’t we have the old phones?” I’m sort of that person, and it’s sort of a catalog of things that I knew as a child that don’t exist anymore—the knickknacks in my grandmother’s house, things I was never going to see again. [I like this quote from L.P. Hartley], who said, “The past is a foreign country; they do things differently there.” Why do people in the nineties think wearing overalls with one shoulder off was a good idea?… That was a way to measure time passing, was the way objects were changing.

MG: What was your favorite scene to write, or the most impactful?

VL: [I have two.] One: the favoritest part of it was thinking about all those objects, and really trying to understand them… to identify the subtleties of why they are the way they are. That gave me a lot of pleasure because these are kind of precious objects from my childhood, and it was a chance to catalog them and roll them around in my head and feel like they hadn’t been lost… They were still inside me. Two: I have PTSD. I had it because I had a horrific labor experience—I was in labor for 90 hours, and even at the end of that, I had to have an emergency C-section… That experience broke me and remade me, and it re-occurs in everything I’ve ever written… I can’t get away from that fearful, terrifying breaking experience. It took me apart, but also remade me as a writer, as someone who had something to say… Writers don’t even hit writer puberty until they’re 30, because you need enough living, enough heartbreak, enough new experiences, to really understand how people live, and make decisions, and cope with being human. Once you get that, you’ll have so much to say and know exactly how to say it. A lot of times [journalists] say, “I’m an aspiring writer,” and I say, “Do you write?” And they say, “Yeah,” and I say, “Well, then you’re a writer now.” It doesn’t matter if your book is published or not, if you’re writing, you’re a writer. At a certain point, though, the wine ripens, and that’s usually around thirty. There’s one scene, but I had to go to a very, very dark place in order to write it. Even now, when rereading that book, I skip that page.

MG: How do you deal with writer’s block?

VL: Because I have two kids, “writer’s block” is the least of my concerns. My concern is “writer’s time.” I published this book in early March and had a baby in late March. I told myself to give myself year, and I forced myself not to write for a year. Give yourself a chance to get on your feet. It’s just a matter of “when is this going to happen?” The one thing is to just sit down and write. Sit down and say, “Today is the day I’m going to write a bunch of crap.” And once you give yourself permission to write the crap, get [that] out of the way, then you really get to the good stuff. I think writer’s block is just the fear of writing badly… Sometimes a change of venue is good; sometimes I get up and walk around and talk like one of my characters… When you’re getting started, just commit to writing every day. If you get the ball rolling, every day it gets easier. Kate Beaton does a web comic called “Hark! a Vagrant” she had this quote: “If you draw, you’re not going to get worse at drawing by drawing.”

MG: Where is your favorite place to write?

VL: We bought a huge antique desk from the 1920s. My husband is also a writer, and this is our present to ourselves. No junk is allowed on it, no Internet is allowed here, this is not a goof-off table. When you’re at this desk, on this chair, you’re writing. Doing that, being able to sit down… I do a lot of planning, of notes and scraps of paper moving around, and it’s nice to do that… The other nice place to write is libraries. I love libraries—I just wanted books in a library. When I have a book in a library, then I’ll feel like I’ve arrived.

MG: What is your biggest inspiration?

VL: [My gut reaction is], I want this to not be nothing. To be something. I was made to think and perceive the world this way, and all of the molecules of me will be around for fifty more years if I’m lucky. If it’s going to get told, it’s got to get told now… Labor was a near-death experience, a wake-up to, “You only have so many years to do the things you want to do, so you better do them.”

MG: Do you have any advice for any young or struggling writers?

VL: The biggest mistake I made was wasting time trying to be real. I’m not real just sitting in my bedroom, writing flash fiction. I thought being real was being in Barnes & Noble. Don’t waste any time waiting for somebody else to make you real. Once you start doing your thing, then you become the place of the new real… Five years ago, the job of “YouTube star” didn’t exist… it’s not because someone decided Youtube was real, it’s because people decided it was real. Just start doing your thing, and you are real.