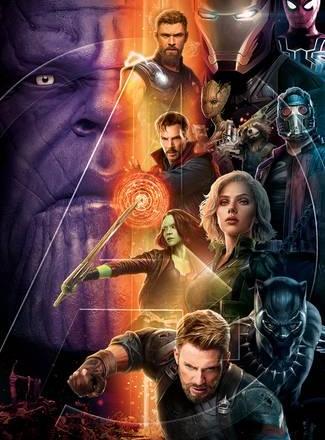 Reaching across the entirety of the company’s renowned cinematic universe, “Avengers: Infinity War” celebrates the decade by bringing together the biggest roundtable of super-powered knights you will ever see in your lifetime. And for a film that spans nearly two and a half hours, has 10 years of material to congregate, and nearly 100 different characters to exhibit, it hangs together about as well as it could.

However, there are a lot of moving pieces here, and though directors Joe and Anthony Russo – who have been accepted into the Marvel collective after their work at the helm of the two previous “Captain America” adventures – manage to juggle their extensively expanded lineup, “Infinity War” unsurprisingly struggles to tell a complete story.  This is not to badger at the script, which is, in fact, surprisingly smart, but only to suggest that there is too much to be told and not even a 150-minute epic can do it complete justice.

Though it is to be expected with this kind of set up, the greatest sacrifice this extra weight puts on the film is the disproportionate screen time between the characters we are all used to seeing run the show. In fact, one of the biggest surprises is how sparingly the Russos use Captain America (Chris Evans), their usual protagonist. At first, even the characters themselves seem to have problems working with one another; many of their initial interactions feel like a bombardment of clashing egos, rather than the beginning of a functional partnership.

The original “Avengers” picture brought together six beings dedicated to saving New York City from a comparatively simple villain (Tom Hiddleston reprises his role as Loki here, Thor’s adopted brother). Now set on a battleground that expands far beyond Earth and deep into the stars, the reason for this major, intergalactic collaboration is the looming presence of Thanos (Josh Brolin), who, until now, has only made minutes-long appearances throughout the MCU.

The Mad Titan is in search of six ultra-powerful Infinity Stones which, when placed inside his gigantic gauntlet, will allow him to wipe out half the population of the universe, thus restoring its “balance;” Brolin and co-writers Stephen McFeely and Christopher Markus do an excellent job creating a complex villain out of a CGI animation worthy of facing Earth’s mightiest guardians.

It does not take long, however, for the film to establish just how serious of a threat Thanos is, and as the battle progresses, many of our heroes actually wish that they had not picked this fight – Tom Holland’s Spider-Man, who abandons a school field trip to join the battle, and who eventually gets beaten to a pulp, says “I should have stayed on the bus.”

Though many of the individual films showcased a villain that required more than one of the MCU characters to defeat, the conglomerate’s entire bench of superheroes, including Iron Man (Robert Downey Jr.), Black Panther (Chadwick Boseman), and Thor (Chris Hemsworth), among others, struggle to detain Thanos for even a minute, let alone defeat him. He has the brute strength of the Hulk (Mark Ruffalo, who gives Bruce Banner more screen time than ever before), and the wit of Doctor Strange (Benedict Cumberbatch), one of the only characters able to counter his destructive power. By the end of the film, having gone through the painstakingly shocking finale, “Infinity War” casts a shadow of hopelessness I’ve never before experienced in a comic book movie.

This atmosphere counteracts the comedic elements these MCU movies have been associated with; rather than complementing the movie like it has done in the past, the joking in “Infinity War” clashes here. Though Chris Pratt and the Guardians of the Galaxy provide most of the relief, watching the characters who used to equip their jabs with one-liners solemnly remain silent exemplifies the seriousness of the situation.

The epitome of this somberness comes, however, with the final moments of “Infinity War,” which will certainly leave audiences in awe. The last 15 or so minutes of the film crash down upon us like a meteorite, and even though these Marvel movies seem to have the same kind of stakes as a “James Bond” or “Star Wars” picture, where characters never seem to be gone for too long, the thoughts and feelings generated by these final images are completely genuine. It’s a shame, however, how difficult it is to believe them.