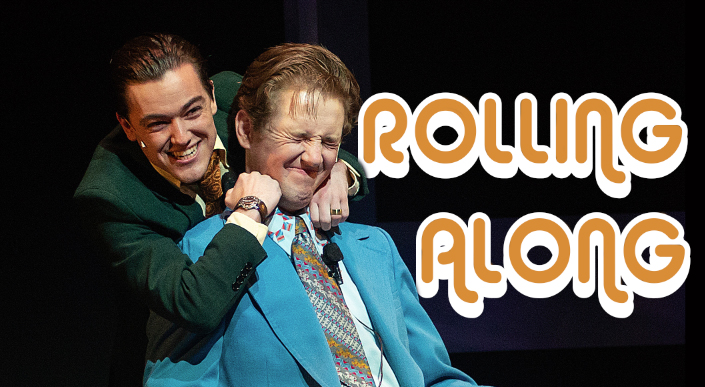 ‘Merrily We Roll Along’ began as a play back in 1934. In the late 70s, after being persuaded by his wife, musical composer Harold Prince, along with Stephen Sondhiem, decided to collaborate with original playwright George Furth, to restructure the production as a musical. Together, the pair sent the production back to Broadway as a musical in 1981.

Interestingly enough, the musical flopped. Seeing a beacon of hope in darkness, was La Jolla Playhouse, whom reworked the musical in 1985 with Sondhiem, and gave the production a new platform to stand on, literally. Ever since, ‘Merrily We Roll Along’ has been rolling across the country, more accepted than ever before.

This musical may come as a shock to unexpecting audience members, as it breaks typical storyline progression. Beginning in 1976, this play takes an enormous leap in time, as it ends in 1957- almost twenty years earlier. Yes that’s right, the story plays out in reverse for the entirety of the musical.

“One of the difficult things about it starting backwards, or moving backwards, and starting at the end of the story, pretty much, is that you have to start, for many of us, in a very interesting place.” said junior Anna Steuerman, who is playing Gussie. “You’re kind of starting at your characters demise. And normally, you have all this time to build and pick up all these things along the way to get to that moment in a play. And it’s odd to do exactly the reverse.”

The play surrounds the lives of Frank, Charley, Mary and friends, whom have known each other for years. The story begins with each character at the most successful points in their careers. Frank, for example, is seen as an influential and supremely successful film producer and songwriter.

However, tensions can be felt amongst his friends and himself, and they struggle to see eye to eye anymore. As the story progresses, the audience gets to see more and more backstory of each character, and gets a better idea of how the characters came to be whom they are in the beginning of the musical.

“It’s a warning for artists, and really anybody who defines success as a more superficial kind of idea.” said senior Michael Bannigan, playing Charley. “If success to you is something like owning the largest house, or having the most money, or the rich things that people have, if that’s your idea of success, then you’re probably not going to be the happiest person in the world. I think this play is very much a cautionary tale or warning against that kind of lifestyle.”

Junior Sam Pomerantz, who is playing Joe, added, “it also explores the relationship between fame and friendship, in a very unique sense, in that it starts at the end of the play, where we see where success has gotten these people, and traces that success back to the roots of the friendship.”

As actors, many of the cast members felt thrown, having to experience their characters lives in reverse.

“We did exercises one night where we ran through the show chronologically, and it was interesting to see the difference of how our bodies felt after having gone through the experiences in the order that it would normally take place,” said junior Morgan Wenerick, playing Beth. “I would find myself getting a little choked up when we would get further into the show when certain things haven’t happened [as yet,] because as the actor, I know [what is going to happen to] the character, but the characters that we’ve come to love as we’ve played them, she doesn’t know what’s going to happen to her yet. But I do.”

As aforementioned, this musical was originally scripted as a play. According to Wenerick, because the play is outdated, the musical component of the production provides a more modern and emotionally relatable platform to the story.

“A song really is almost like the internal monologue, a lot of times, of what people are feeling,” said Wenerick. “I think it gives voice, especially to the female characters, and it really flushes them out a lot more in the musical version.”

According to Pomerantz, the major takeaway from this story, is that life goes by really fast. Too fast to be focused on the wrong things.

‘Merrily We Roll Along’ is playing at the Mainstage theatre now until May 11th. Tickets can be bought at the box office in the Center for the Arts, or online at TUboxoffice.com. Tickets are only $8 for students with a valid student ID.