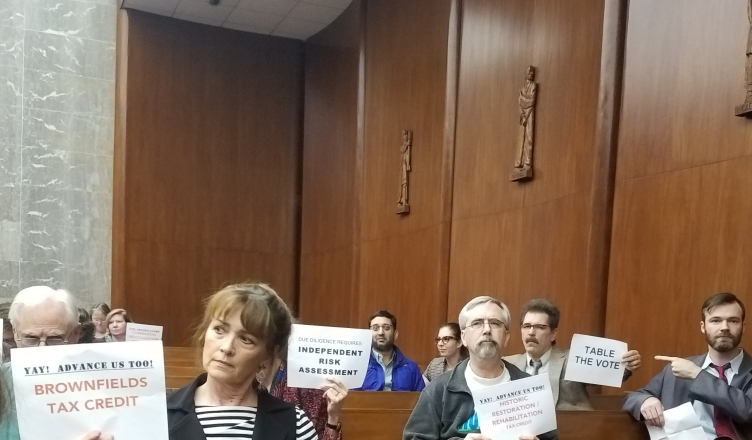 The Baltimore County Council voted 4-3 along party lines Monday night to give nearly $43 million in financial assistance to the developers of the Towson Row project.

“Where there’s a vacant retail property, crime and blight are not far behind,” Almond said. “Here we have an opportunity to energize new economic development in Baltimore County and capitalize on $350 million of private investment.”

The 1.2 million square foot, $350 million Towson Row project will be located north of Towson University, and will be bounded by York Road, Towsontown Boulevard, and Washington Avenue and West Chesapeake Avenue.

The mixed-use development will include retail space, offices, 300 student housing units, 250 luxury high-rise apartments and a hotel, according to Greenberg Gibbons.

William Anderson, executive director of the county’s economic and workforce development department, said that as TU prepares to convert the University-owned Marriott Conference Hotel to student housing in 2018, the construction of a new hotel as part of Towson Row is even more important now.

Caves Valley Partners completed demolition on the Towson Row site in fall 2015, but construction halted after the developer discovered a giant rock under the surface. Greenberg Gibbons joined the project as a co-developer in May 2017.

Economist Anirban Basu, who the county hired to produce a report on the Towson Row deal, acknowledged residents’ “angst,” but said this deal is an opportunity for revitalization in Towson.

“We’re literally stuck between a rock and what appears to be a hard place,” said Basu, who is the chairman and CEO of Sage Policy Group. “But I have to say, it would be hard to turn this away.”

According to a study by Sage Policy Group, the Towson Row project will create 2,000 permanent retail jobs and 3,500 temporary construction jobs.

“One good job equals a person with opportunity, self-worth,” Jones said. “They take care of their family, they feed their family, they send their kids to school, they buy things in the community, and they are less likely to somehow be driven into a life of crime or despair.”

However, some county residents were not pleased with the council’s vote.

During the meeting, several attendees waved signs reading “Yay! Advance Us Too!” to urge the council to finance their projects as well.

Scott Pappas said the council rushed their vote on the deal.

“Why did it have to be rammed through the way that it was literally a week or so before Christmas holiday without only ten working days to review it?” Pappas said. “Answer that question. Why couldn’t we table it?”

Pappas said he thinks the vote is bigger than Towson, and that it reflects Almond and County Executive Kevin Kamenetz’s individual campaigns for new political offices.

“There is an enormous amount of ulterior motive involved in what we’re looking at right here,” Pappas said.

“As far as giving free money to these businesses, I’ve worked for small and mid-size businesses my whole life and not once have any of them ever gotten a grant to either be saved or significant startup…. If some company comes in with hundreds of millions of dollars, all of a sudden there’s money to help them. But ‘mom and pop’ shop down the street – they have 50 employees, that’s not nothing – if they’re going up, well they’re going up,” Rader said.

Brenda Bodian, a commercial realtor with BJB Realty Advisors, said the council has failed to factor in the possibility of a recession.

“We have so many things to pay for and we don’t have the assurance that the markets are going to stay strong,” she said.

Bodian also said this vote sets a precedent for other people to expect money from the Baltimore County Council to pay for their own developments.

“Every single developer, every homeowner, everybody that’s building housing, everybody that wants to clean up our Brownfield, is going to ask them to use the same formula to give them the money upfront,” Bodian said. “How can the county budget for that?”

Marks, who represents the 5th district including Towson, posted a statement on Facebook following the vote.

In the statement, Marks said Greenberg Gibbons was the right developer for Towson Row and that “some form of financial assistance is appropriate to jumpstart this project” but that he would have preferred a loan instead of a grant.

Marks also voiced his concerns about the circumstances in which the deal was passed and the economic impact the deal could have on future county executives and county councils.

“I had grave concerns about the speed with which this package was presented to the County Council,” he said in the statement. “I also had little confidence that the Kamenetz administration will communicate with the Council once it gets this contract approved.”

Still, the Towson Row financial assistance deal is not without its supporters.

Nancy Hafford, the executive director of the Towson Chamber of Commerce, said the development will not only bring new jobs to Towson, but will also bring new business to restaurants and shops in the area where those new workers might frequent.

Hafford said the development has earned the support of members of the Towson Chamber of Commerce and the businesses that are ingrained in the Towson community.

Greenberg Gibbons chairman and CEO Brian Gibbons said he was disappointed the deal did not earn a unanimous vote from the council. However, he remains hopeful about the impact the development will have on Towson.

“I live in this community,” Gibbons said. “I went to Loyola High School in Towson right around the corner. This is a chance for our company to do a major, impactful project that’s going to change the face of Towson.”

Basu said he has weighed the risks of the project, but ultimately he said Towson Row is the “best chance to really develop a high-quality downtown.”

“Imagine what happens if Greenberg Gibbons leaves this deal,” Basu said. “How long that hole in downtown Towson will be there. Who will be the next developer? We don’t know. How much will they ask for? And there’s a major risk to not moving forward with this.”