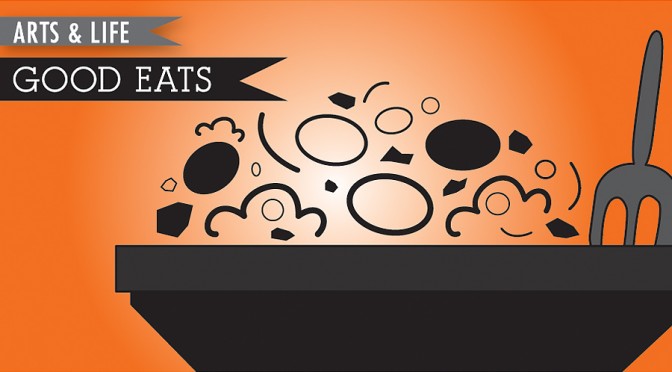 Close your eyes and imagine all of the tastiest treats, beers, wines and the best restaurants of the area. Now, open your eyes and realize that this was all a reality this past weekend, April 18 to 19, at The Emporiyum in Baltimore.

There were sweet things, salty things, savory things and even alcoholic things. For all of you who weren’t there basking in the foodie glory, I’m here to share some of the highlights of the day.

The market was massive and full of people and vendors. The Emporiyum had taken over an old bread distribution center to fit all of the vendors. Inside, the smells were overwhelming, my dad and I quickly scanned the market to see where to start our food journey.

We picked a crowd favorite (judging by the line), The Local Oyster, a traveling oyster bar local to the Baltimore area. Offering fresh oysters on the half shell for a dollar, it was a perfect snack to get the afternoon started.

From there we moved around to several different locally produced products like WOOT! Granola, a local granola company who uses all natural ingredients and creative pairings to make a spicy yet flavorful snack.

The Mallow Bar was our next stop, which served artisan and handmade small batch marshmallow treats, called Mallow Crunchies, in all different flavors. Mallow Crunchies are sold at farmers markets, online and at specialty shops. You have to try the one with M&Ms.

After a quick swig of water we were on to more vendors. Soom Foods featured natural, gluten-free and vegan style spreads. Their Sriracha hummus was flavorful and delicious.

Keeping with the spreads and dips, Cava Mezze, a Greek inspired restaurant found in the D.C. area, had some fantastic hummus spreads to sample.

Finally, King of Pops exceeded all expectations with their flavorful and fruity ice pops served out of a traditional style cart.

As for the featured restaurants at The Emporiyum, the chefs put on an expo for everyone. Fleet Street Kitchen’s own Chef Michael Correll prepared a chorizo sausage with radishes and avocado. Chef Zach Mills of Wit & Wisdom in The Four Seasons, had a spicy version of Maryland crab.

A new favorite of mine, The Corner Pantry’s own Chef Neill Howell had a traditional English sausage roll.

The Food Market had one of their most popular selling appetizers to taste, a warm bread stick with beer-cheese fondue. Timber Pizza Company, a mobile wood-fired pizza company, surprised my taste buds with a caprese salad on a stick and a delicious pesto pizza. The newest addition to the Baltimore food scene, Shake Shack, provided their single and double burgers and their famous concrete milkshakes.

Above all, there were two dishes that absolutely blew my mind. Dooby’s Chef Tim Dyson had a Korean style fried chicken with unbelievable Thai sauce. Also Woodberry Kitchen’s creativity was unprecedented as the chef prepared a traditional brisket and slaw sandwich served on a homemade glazed doughnut. The end result was delicioso.

The Emporiyum brought together some fantastic food vendors, restaurants and foodies both young and old. It was a true depiction of the growing food trends and I was so happy to be able to attend it.

For a full list of vendors and restaurants at this year’s Emporiyum please look online at theemporiyum.com

Until next time. I wish you GoodEats!