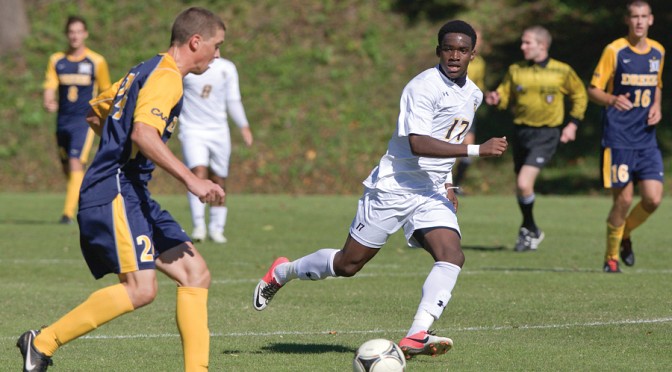 Kay Banjo was in the car when he got the call.

“I tried to stay composed and but couldn’t,” Banjo said.

The call came from Vancouver Whitecaps Manager Carl Robinson, who informed Banjo that he’d been chosen by the team with the 38th overall pick in the 2015 MLS Superdraft. Robinson told reporters after he drafted Banjo that the former Towson soccer player had the “fundamentals of potential.”

“I mean every young player has had a dream about playing professional, but for it to actually happen for me was unbelievable,” Banjo said.

Banjo now has the chance to join the group of 50 former Towson players that have played professionally in the United States. If he chooses to sign with a team abroad, he would become the 11th former Tiger to do so.

During the 2014 season, Banjo was one of six former members of the 2012 Towson men’s soccer still playing collegiate soccer. Former Head Coach Frank Olszewski said he’s kept in touch with Banjo and the rest of the 2012 team.

“To see any of those guys succeed is really gratifying,” Olszewski said. “They may have gotten a great start at Towson but unfortunately weren’t able to finish it here, but they’re able to take it to the next level and get other opportunities.”

The Superdraft marked the beginning of a new journey for the Banjo, but it also meant the end of a long college campaign. He played three seasons for Towson before the program was cut, and then decided to transfer to UMBC, wait a year to become eligible, and finish his career in 2014.

During his three years at Towson, Banjo scored 15 goals and dished out 11 assists in 43 games. He received All-CAA honors all three seasons, including First Team in 2012, making him the eighth player in Tigers history to earn the honor.

However, after the team was cut in early 2013, Banjo had a decision to make. He had to choose whether to stay at Towson, attempt to transfer or pursue a professional tryout. Banjo had put emphasis on graduating, so he decided to get his degree in sports management from Towson before figuring out his future plans.

After he graduated, Banjo had his mind set on going to a professional tryout, but still listened to offers from a few schools.

One school, UMBC, particularly intrigued him.
“UMBC stood out to me because of the players and coaches that showed so much interest,” Banjo said. “I got invited to come ‘hear them out’ and I went in with my pops and Coach [Pete] Caringi convinced me to stay come play one last year and he can promise me that I’ll be in the MLS draft and get drafted in return, I’ll help the team get further in the NCAA tournament.”

He had to sit out a year to be eligible to play for UMBC in the 2014 season. However, when the time came for him to hit the field, Banjo said his attention was solely on his new team.

“I enjoyed my time at Towson,” Banjo said. “I still keep contact with the team from Towson, but once I started playing at UMBC, they were my new team therefore I had to shift focus.”

The focus paid off, as he led the team to an America East Championship and a Final Four appearance in the NCAA Tournament. Banjo contributed to UMBC’s four-game run that culminated in his game-winning penalty at Creighton that sent the Retrievers to the national semifinals.

“He fit like a glove, as far as fitting into the system and playing with the guys,” UMBC Head Coach Pete Caringi said. “… It was like he was here for all of the four years.”

The national attention from the 2014 season may have helped Banjo’s name rise on the radar on MLS teams, but Olszewski said he saw the former Towson forward’s potential before that.

“There’s no question [he had the potential],” Olszweski said. “Kay is someone who has a love and passion for the game and when you add that in with his many skills and his great tactical understanding of the game, you’ve got all the makings of a kid who can play at a high level.”

Banjo will begin competing for a spot on the Whitecaps roster soon. If he does not make the team, he could play in the United Soccer League, a developmental league for the MLS, or look abroad.

As for Banjo, his goals are simple: “Just be the best I could be both on and off [the field]. Work hard on the pitch and stay out of trouble off the pitch.”