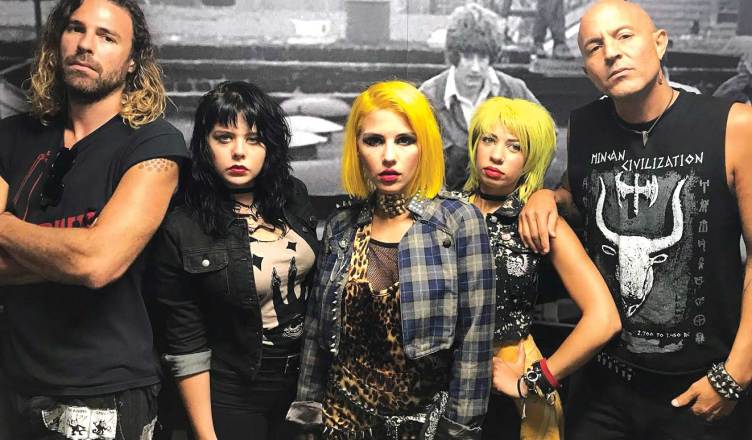 According to Queen, every Barb Wire Dolls album is different in its own way, but “Rub My Mind” has an especially angry and dramatic feel. This new album demonstrates the band’s sound evolution from their first works that possess an “underground” sound.

Barb Wire Dolls recorded “Rub My Mind” in two days at the famous recording studio Rancho De La Luna in California. Queen said the recording of the new album was a “freak accident” that occurred after making connections with the guitarist of Eagles of Death Metal. A short time later, Barb Wire Dolls was recording in the same studio that music legends Iggy Pop and Queens of the Stone Age had.

Queen also commented on the technical aspects of writing “Rub My Mind.” She explained that the lyrics were typically written first, with the music accompaniments created afterwards. Barb Wire Dolls is open to letting the creative process move the song instead of sticking to a rigid plan.

Queen said that although there are many slower songs on “Rub My Mind,” this was not intentional, but rather a product of the creative process guiding the album. In fact, the singer said that part of the reason there are a good amount of soft songs are because of political issues that Barb Wire Dolls felt they should comment on.

Politics are exemplified in the song “Contract,” which Queen explained is “based on the humans we elect into positions.” This song takes that idea and turns it into a satirical joke, explaining how the people in power’s “whole goal is to write contracts to fuel their own fire,” when they should be leading with the best interests of their people in mind.

According to Queen, this song was written during the time of the 2016 elections, and was heavily influenced by the events of that time. “Back in the U.S.S.A.,” Queen explained, is a comparison of the United States in 2016 to the Soviet Union in the 1980s. This song will make listeners feel like they have gone back in time from the comparison of these two historic events.

Another important theme in “Rub My Mind” regards the emotional aspects. Queen explained that many of the tracks try to convey a personal message to the listener and future musicians.

“If you think you’re good enough, you can do it,” she said.

“Rub My Mind” describes what it means to exist in this world and making sense and purpose out of your own being. She also explained that the song “Waiting to Be Lost” is an especially emotional song and an “ode to finding who you want to be in the world.”

Descriptions of the desert, mountains and sea are frequently utilized on “Rub My Mind,” especially in the songs “Desert Song” and “Gold.” Queen said these references to nature-scapes give the album a spatial quality that is accessible to all audiences. She explained that these areas can be experienced “wherever you go” and therefore make an excellent comparison to the different human emotions.

According to Queen, listeners will be able to relate to places like the mountains, and therefore be able to identify more closely with the ideas and emotions the album is trying to convey.

“Rub My Mind” is a refreshingly honest album from a band that displays obvious talent and creative intelligence. With their unique and diverse sound, it is no wonder that Barb Wire Dolls is entrancing the ears of many listeners who are looking for something new and important in the modern music scene. I encourage all readers to take Queen’s closing remarks to heart and “enjoy the album, listen to it loud. This album is amazing.”