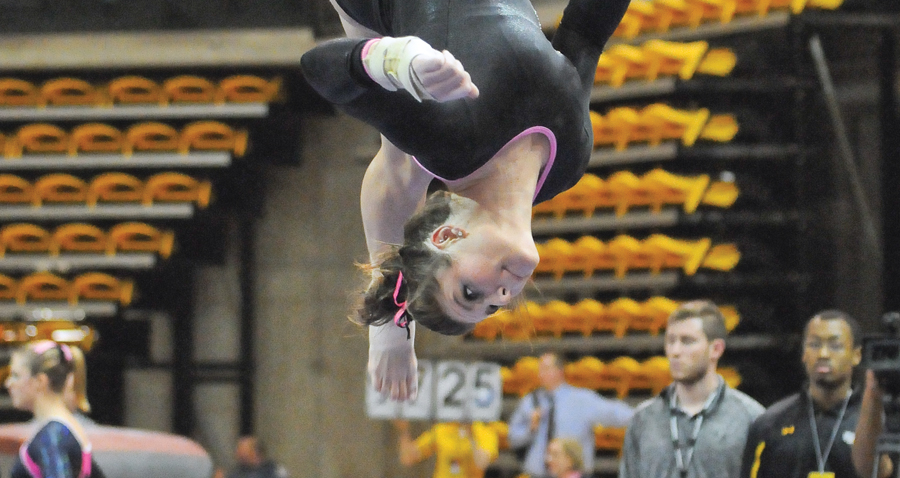 Towson defeated Lindenwood in a tri meet on Sunday, but fell short to Brown, the host team. The Tigers concluded the meet with a total score of 193.125, just a few points shy of Brown with 193.400. Lindenwood finished with 192.775.

The team began on vault, led by juniors Lydia Thompson and Katie Sassa, who tied for the Tiger lead with matching scores of 9.750. Freshman Tyra McKellar finished third for the team and eighth in the event with a score of 9.625. Freshman Lauren Cahalan finished just behind with a score of 9.600. The team had a total score of 48.300.

“Lydia Thompson has been working back from her ACL injury last year,” senior Lauren Ross said. “This was her first meet back on vault, and she came in second place. We’re all so proud of the progress she’s made.”

McKellar took charge for the Tigers on bars, placing first with an impressive score of 9.825. Junior Vicky Vesecky finished second for the team with 9.725 and tied for fifth in the event. Senior Samantha Lutz and Thompson both scored 9.700 to tie for seventh. The Tigers finished with a team score of 48.525.

Ross placed first on beam with a score of 9.825. McKellar finished in a tie for second with 9.725 followed by senior Janis Konkle with 9.675 for sixth. Sophomore Bridget Steffen and Cahalan finished with matching scores of 9.175 to round out the team. The Tigers finished with a team score of 47.575.

Senior Nicolette Vignola placed first for the Tigers on the floor exercise and third in the event with 9.825. Lutz took second on the team with 9.775, followed by Cahalan with a 9.750.
The Tigers boasted a final score of 48.725, the team’s highest for the evening.

McKellar took first in the all-round competition with a total score of 38.850.

“Even if we have mistakes, we always try to keep the energy up for the rest of the meet,” Ross said. “As a team, we have been working a lot on the mental aspect of the sport. We have mental cues that we tell ourselves before and during our routines so we can stay focused no matter what has happened.”
The Tigers will host George Washington this Friday, March 13, at 7 p.m. in SECU Arena.