This weekend, the men’s team defeated the Georgetown Hoyas 171-126, while the women’s team edged out a 158-142 victory, earning Towson its first victories of the 2016 season.

“We have a very challenging fall schedule so to get a team victory is phenomenal,” Head Coach Jake Shrum said. “It took a lot of people to step up and have great swims to pull out these wins.”

Sophomore Emily Wilson won the three-meter boards with a career-high 265.20 points and won the one-meter boards event with 261.82 points. 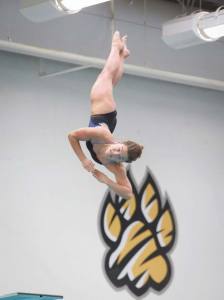 Sophomore Kelsey Jehl finished second behind Wilson in the one-meter event with 261.45 points.

“For the girls, the divers got us off to a great start,” Shrum said. “Emily Wilson was fantastic on both boards. Kelsey had to deal with some adversity on three-meter, but came back really strong on one-meter, showing a ton of mental toughness.”

Junior Caitlin Manthe won the 100-yard freestyle event with a time of 53.35, while junior Jacy Icard captured a victory in the 200-yard backstroke with a personal-best time of 2:06.01.

Sophomore Tasha Reidenbach won the final individual event of the day, the 400-yard individual medley, with a time of 4:38.51.

“We had some really great swims resulting in wins in the second half of the meet,” Shrum said. “Caitlin Manthe in the 100 freestyle, Jacy Icard in the 200 backstroke, and Tasha Reidenbach in the 400 IM.”

On the men’s side, freshman Ryan O’Leary won the 100-yard breaststroke with a personal-best time of 58.28.

Sophomore Stefan Keller won the 200-yard breaststroke in 2:09.07, and O’Leary followed in second place with a personal-best time of 2:09.09.

Sophomore Will Dougherty led the Tigers to a sweep of the 1000-yard freestyle with a personal-best time of 9:35.32.

“On the men’s side, Ryan O’Leary, Stefan Keller, Will Dougherty, and Jack Saunderson continue to have great falls,” Shrum said. “Even with those wins, it was our depth in each event that allowed us to pull away from Georgetown.”

Following this past weekend’s victories at Burdick Pool, the Tigers look to add to the win column with a road matchup against local rival University of Maryland, Baltimore County, Saturday at 1 p.m.

“It was a step forward from the Penn State meet in terms of a total team performance,” Shrum said. “Now we need to continue to find ways to take the next step over our next run of meets.”