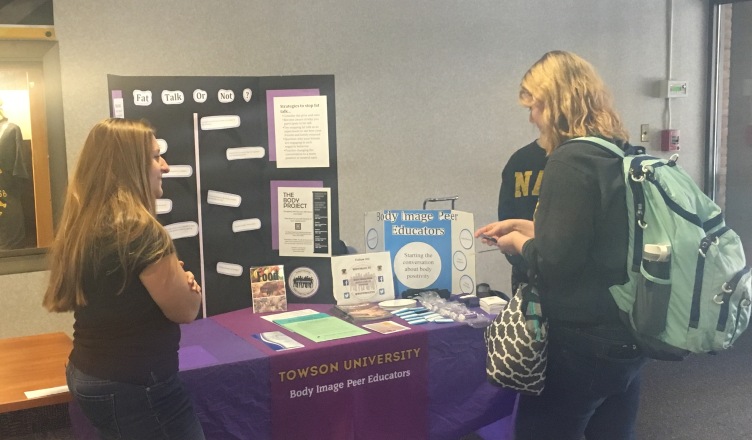 According to the Multi-Service Eating Disorders Association, about 20 percent of college students reported having or formerly having an eating disorder. During National Eating Disorder Awareness Week, from Feb. 27 to March 3, Body Image Peer Educators and Delta Phi Epsilon held events to destigmatize eating disorders by educating students and promoting conversation.

According to the National Institute of Mental Health, an eating disorder is a “serious and often fatal illness that causes severe disturbances to a person’s eating behaviors.” Not everyone who struggles with an eating disorder has anorexia or bulimia. Disordered eating patterns can include obsessions with food, body weight and shape and binge-eating disorders.

The rate of reported eating disorders has increased since the 1950s—in the 1980s, the rate among college students was about 5 percent.

“I think it has to do with what society portrays as ideal,” Body Image and Diversity Peer Education graduate assistant Kirandeep Kaur said. “There’s a lot of pressure, especially with social media, about what is considered an ideal body type, and people try to emulate that in really unhealthy ways.”

“We want to advocate body positivity, not for just the conventionally attractive woman, [but for] all demographics,” senior Delta Phi Epsilon member Samantha Derr said.

The assumption that men don’t suffer from eating disorders isn’t the only myth that BIPE and DPhiE sought to dispel.

Kaur said that incoming freshmen sometimes get the harmful idea that being at college will cause them to gain weight, colloquially called the “Freshman 15” to describe a 15-pound increase.

“Some people engage in negative eating behaviors or diets or exercise that might try to combat the Freshman 15, but studies have shown that students don’t typically gain that much weight anyway,” Kaur said.

During the Eating/Exercise Awareness at Towson (EAT) launch party on Monday, students in the Union could receive information about on and off-campus resources for those struggling with eating disorders or body image and healthy ways to exercise and eat well. BIPE also offered free eating disorder screenings to assess students’ risk of engaging in disordered eating patterns.

On Tuesday, students could earn prizes by spinning a trivia wheel to learn about different topics related to body image and health at BIPE’s Bikini Body event. BIPE members also talked about what makes a “bikini body” — simply just having a body, because there is no such thing as an ideal shape.

Students also had the chance to participate in a one hour yoga session on Wednesday.

On Thursday, BIPE discussed “fat talk” with students, which is the sometimes subtle conversations, usually between friends, that reinforce negative body image and promote “negativity around the body,” Kaur said.

“Saying things like, ‘should I really be having these fries?’ or ‘I hate the way my thighs juggle when I walk…’ It reinforces negative eating behaviors or restrictions or unhealthy dieting and exercise,” Kaur said. “It’s really important to be aware that even those little things can make a difference.”

Delta Phi Epsilon held empowerment workshops as well as lip sync battles and pie-throwing competitions to fundraise for the National Association of Anorexia Nervosa and Associated Disorders (ANAD). On Friday, they held a “symbolic event” in Freedom Square called “Trash Your Insecurities,” in which students wrote down their insecurities and literally threw them away.

Students who struggle with eating disorders, body image or their relationships with food can contact Dr. Jamie Kaplan, coordinator of eating disorder services and BIPE.