The on-campus Black Express Route shuttle will be suspended through the remainder of the semester due to a lack of drivers, according to Director of Parking and Transportation Services Pam Mooney.

“We’re short on drivers, and who we do have, we need to have on the other routes,” Mooney said. “So, since there are already two gold [shuttles] serving that one, we’re suspending that in the hopes of being able to get people hired before the start of the next semester.”

Mooney also said that the department has been operating with approximately 10 open shuttle positions, and that the licensing requirements necessary to operate the shuttles make drivers difficult to come by.

The route, which typically runs exclusively between West Village and core campus, was first introduced at the start of the semester to act as an abbreviated supplement to the other on-campus shuttles.

All remaining shuttles, both off and on campus, will continue to run through the end of finals, but only the ParaTransit and off-campus services will operate during the minimester. These buses will run on an abbreviated schedule. Shuttles do not operate when classes are out of session. 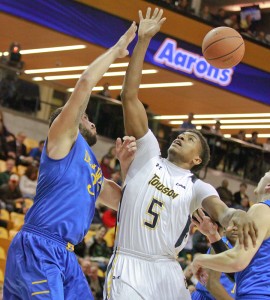