Black Lives Matter movement leaders Opal Tometi, Bree Newsome and the Rev. Dr. Heber Brown III spoke about the origins of the social movement and what it means to them during a candid on-campus discussion of race March 30.

The event also inadvertently fostered criticism of Greek Life assessment procedures after a large group of students left midway through.

Freshman Morgan LaRocca said that the people who left early are the ones who needed to hear the speakers’ messages the most.

“I just think it speaks volumes about our school,” LaRocca said. LaRocca said it was sad to see “amazing, huge leaders” come to Towson and then be “so blatantly disrespected by a group of individuals.”

During the program, each speaker described their relationship with the Black Lives Matter movement and what motivated their involvement.

Tometi, co-creator of the twitter hashtag and Black Lives Matter movement, stressed the importance of speaking out about the injustices plaguing society.

“We cannot be silent,” Tometi said. “Black Lives Matter is a movement of people who decided not to be silent.”

The #BlackLivesMatter movement was founded in 2013 by Tometi, Patrisse Cullors and Alicia Garza after George Zimmerman was acquitted in the fatal shooting of Trayvon Martin. According to the organization’s website, it is an online forum intended to build connections between black people and allies to fight racism, create dialogue and facilitate social action and engagement.

Tometi stressed that while she and her co-creators founded the organization, the greater population created the movement as a whole.

She described the current state of the systemic devaluing and dehumanization of black people in society, and encouraged all people to acknowledge the history that has brought the issues to this point.

“Our thoughts will not save us,” Tometi said. “Your silence will not save you. We’re dying regardless. Our lives quite literally end when we’re silent about things that matter. I hope that you’re not silent about Black Lives Matter.”

Newsome, the activist who removed the Confederate flag from outside the South Carolina State House, said that, “Black Lives Matter is the newest chart of a centuries old struggle.”

She began by describing the scene leading up to her removal of the flag. When the flag was raised in the early 1960s, Newsome said it had “nothing to do with anything except racism.”

In June, Time and The Atlantic reported that some historians believe the flag was raised as an act of rebellion against the growing Civil Rights Movement.

Newsome was angered by the Trayvon Martin case, the Charleston church massacre and the changes to the Voting Rights Act in North Carolina. According to Newsome, she climbed the flagpole to attack and replace a symbol of racial discrimination.

Newsome encouraged further education and faith as cornerstones of social activism, and stressed that times of social changes are often marked by turmoil.

“Courage is not about the absence of fear,” Newsome said. “I didn’t climb the pole because I’m fearless. I climbed it because of a thousand year struggle for freedom and democracy for all.”

Brown, a social activist, community organizer and senior pastor of Baltimore’s Pleasant Hope Baptist Church, encouraged attendees to “lean into the discomfort,” and to avoid softening language for the sake of other people’s comfort.

Brown stressed economics as playing a role in ensuring systematic poverty throughout the country and spoke to white audience members, asking them to bend their privilege in the direction of justice. He described a “white Messiah complex” that is counterproductive to sustainable movements.

In the same respect, Brown stressed that the Black Lives Matter movement is not about bargaining for support from white people.

“If this movement is about gaining white approval, then I resign from it tonight,” Brown said.

The Black Lives Matter event was hosted by the Center for Student Diversity in conjunction with its Diversity Speaker Series and the John Gissendanner Memorial Lecture. The speakers also participated in a discussion and Q&A moderated by political science department assistant professor John Bullock.

Students took to social media following the event to express their disapproval after a large group of students from predominantly white fraternities and sororities left the event early. Some critics took the early departures as an indication that some audience members were only there to earn points in the Chapter Assessment Program.

The Chapter Assessment Program, or CAP, assesses each chapter’s involvement and performance in academics, chapter management, member development and community involvement. Each chapter’s CAP portfolio is graded on a point system, and chapters are awarded either a Gold, Silver, Bronze or Needs Improvement status based on their scores.

Chapters receive monetary, recruitment, social and recognition incentives for their participation in the program.

“There’s always a rule that says if you go to an event and leave early, then you lose your CAP points for the entire semester,” James said. “Last semester they said they’d work better at enforcing that. We’re going to make sure we follow up with [Lenno].”

Lenno said their behavior was “insensitive, rude, entitled and quite frankly unacceptable.”

National Pan-Hellenic Council President Kayla Tullis said that while CAP has its flaws, overall “it’s a good program.” NPHC is the governing body for the seven historically black fraternities and sororities on campus.

According to Tullis, the students who left did not understand the magnitude of the event. The chapters involved are being held accountable and are thinking of ways to apologize and move forward.

“I don’t think it’ll be an issue in the future,” Tullis said. “They feel bad… Them leaving early sends the message that they didn’t care. They do care, they just didn’t understand what was happening. I hope it’s a learning experience for them and for all of us.”

-Carley Milligan contributed to this article. 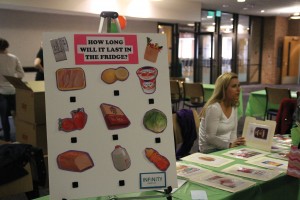