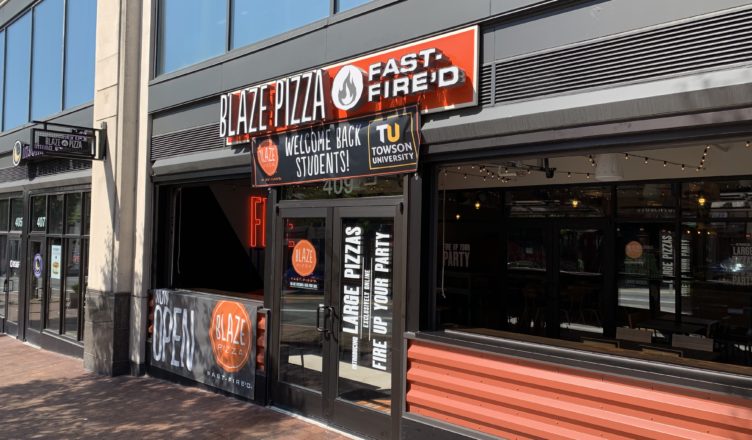 Nestled in the middle of uptown between New Generation Hot Pot and Insomnia Cookies, Blaze Pizza has been open a little over a month and has started to gain traction and positive feedback from locals and students. General manager Karlyn Richins acknowledged the affordability and speed of the shop to what sets them apart from other surrounding pizza places.

“We are able to turn out a pizza a lot quicker than other places can,” Richins said. “You can come in line, and are able to walk through with your pizza and get it in usually less than eight minutes from the time you walk in the door. For us it’s nice to be able to offer something that’s quick enough for lunch and dinner and in between classes.”

According to owner Kenneth Brewer, Blaze’s goal is to have a multitude of options for anyone who wants pizza while also acknowledging food intolerances and health choices.

“The most important thing for us, as operators, the most important thing that we thought about is how can we put a solution close to the university that gives students a lot of options,” Brewer said.  “You can be with a study buddy, and they could be lactose intolerant, well we have a pizza for that, but two people don’t have to share the same one pizza.”

In addition to nutrition, the quality and freshness of the pizza is something that Blaze takes pride in.

“We want to give them natural products, so 80-90% of all of our products are never frozen,” Brewer said. “They come in fresh daily. And we have 24-48 hour dwell times, so if we don’t serve them within that time, we get rid of them.”

According to Brewer and Richins, the dough and sauces are all made in house. If you go further back in the restaurant, there is also a window looking into the kitchen so that guests can see the proof of quality.

“Most of our stuff is made in house, our sauce, our dough, you can really taste the difference when you have it made in house,” Richins said.

Blaze has been well-received from the community. Towson Baltimore County Public Library Communication and Media Relations specialist Erica Palmisano has become a regular at Blaze in the past month.

“Everything is always super bright, fresh and clean. It’s our [BCPL staff] new favorite place, it really is,” Palmisano said.

Blaze currently has 300+ locations across the world, and is expanding rapidly, according to Brewer.

Brewer also noted that the business also takes pride in their staff.

Richins foresees that the Towson location will flourish.

Blaze plans on offering different promotions for students and locals throughout the year, such as two dollars off for students.

“We will offer, effective immediately, any of the colleges two dollars off any pizza when they show that they’ve downloaded our app and they have an active student ID,” Brewer said. “We will run that promotion until homecoming for each student.”