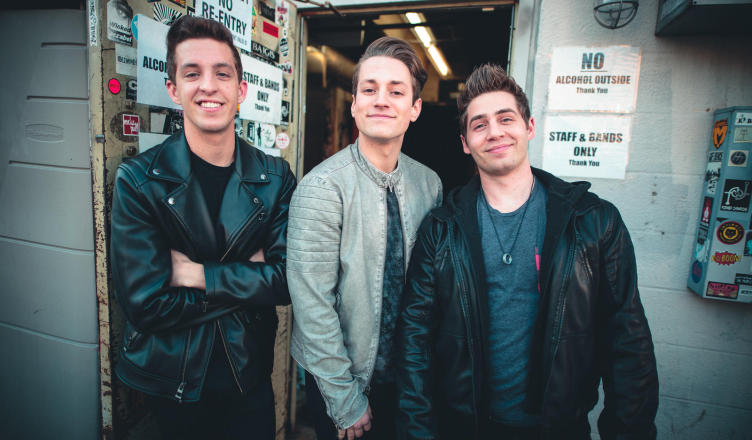 The band consists of lead singer Aaron O’Conner, lead guitarist Scott Montgomery and drummer Brandon Millman, who is a Towson alum. The Baltimore natives are known for playing pop rock jams, ranging from songs by Panic! At The Disco to Hailee Steinfeld.

According to O’Conner, the band came up with their name “during a very late drive through the Midwest while [they] were listening to the song ‘Guts” by All Time Low.’”

“The first line in the song is ‘shooting for the stars,’ which struck as a very inspirational line,” O’Conner said. “We had always enjoyed the sound of the word ‘story’ and its implication somewhere in whatever the name was going to be, so when we eventually thought up the word ‘skyward,’ we figured that the two words sounded great together while also staying relevant to what we believe in: shooting for the stars.”

Formerly known as 3PM, the band began with a punk rock aesthetic, drawing inspiration from bands such as Blink 182 and Yellowcard. They worked to build up a following, selling over 25,000 copies of their album, “Slow Me Down,” before eventually coming to a close. Millman and Montgomery, original members of 3PM, took to Twitter to find a new vocalist. Once the duo came across O’Conner, Skyward Story was in the making.

The group’s style and sound evolved to include a pop aesthetic, with their talent attracting the attention of Matt Squire, a multi-platinum music producer and writer in the industry who has worked with stars such as Ariana Grande and One Direction.

Skyward Story has since put countless hours toward their work, and are proud of all they have accomplished in such little time. Montgomery looks at the group’s sense of teamwork as what has allowed for such success.

“We will all usually have pieces of music that we will bring together, sort of like a puzzle,” Montgomery said.  “We will then take pieces and work them together, attempting to make each part more interesting in the process. Then we will record demos to listen to and work on, until full songs are eventually finished.”

In addition to performing covers, the band has their own original songs that can be found on Spotify and Apple Music. Their more recent songs, “Hey!” and “Smile,” can also be found on YouTube.

As for 2018, Skyward Story hopes to continue their momentum and break through walls in the music business. The band has made an impact in the Baltimore area and hopes to provide more music for the area to listen to and experience as the year goes on.

“All of our fans do things that make us happy every day,” Montgomery said. “The fact that they listen to our music and come to our shows is very awesome!”

Outside of their music life, the band spends their time watching “South Park” and “Family Guy,” playing tons of video games, and joking around. According to Millman, the jokester of the group is O’Conner, but they all share a good sense of humor.

The trio hopes to shoot for infinity and beyond with the support of their fans as the band continues on their skyward trajectory.