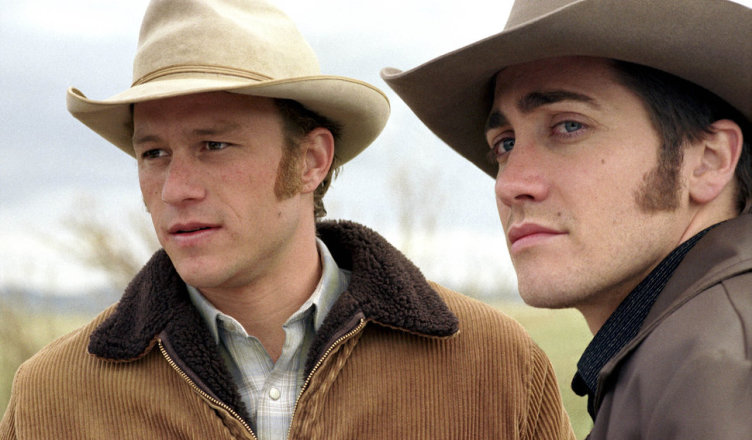 Longing haunts the lovers from “Brokeback Mountain,” a film of loss, desire, and abandoned dreams, revolving around lives crumbled by suppressed passion and forced settlement.  Spanning the course of nearly two decades, director Ang Lee gives the highlights of the forbidden romance between Ennis Del Mar and Jack Twist, who meet in the summer of 1963 when they are hired to tend sheep on a Wyoming mountainside.

To those who have not seen it, the unfortunate and cruel simplification attached to the story – “the gay cowboy movie” – does it no justice. Anyone who has had the pleasure of watching “Brokeback” knows that it is more about a time and a place where even the most genuine and personal of passions are condemned and hunted.  A time and a place where two men are heartbreakingly unable to exhibit the only true feelings they will probably ever experience. Its star-crossed message is universal.

Twist and Del Mar’s love makes no sense here in this place, except for where it all started: the remote Brokeback Mountain.  After their first summer together, a long overdue reunion between them conjures up an affair that sees each man retreat back to the mountainside year after year.  Their fears are stifled, if only momentarily, in these hills.

On one of these occasions, Del Mar (Heath Ledger) tells Twist (Jake Gyllenhaal) the story of two men who lived together near where he grew up.  Though “they were pretty tough old birds,” they were found one day beaten to death.

“My daddy, he made sure me and my brother seen it,” Del Mar says, “for all I know, he done the job.”

This display of hatred taught Del Mar to fear his own emotions, a fear that looms over the entirety of “Brokeback Mountain.”  It is the ghost in the room. While Twist, who is the more expressive and romantic of the couple, seems less worried of the consequence as long as the two are together, Del Mar remains hesitant, content with and fulfilled by the few moments they manage to scrape together.  This disbalance ruptures the foundation of their relationship, leading to a confrontation as devastating as it gets. Though Del Mar never has many words to say, when he does speak, he speaks to Twist, and it isn’t until it is too late that Del Mar realizes what he missed.

When they are not together, each go through the motions of a less-desirable life.  They have wives and families and jobs that take the back seat whenever an invitation comes in the mail.  The wives, played by Michelle Williams and Anne Hathaway, serve an important role, showing that Twist and Del Mar are not the only victims of these forbade emotions.

“Brokeback,” while its conflict revolves around hostility towards homosexuality, was not made solely for homosexuals.  The passion created here bravely by Lee, Ledger, and Gyllenhaal makes no restrictions on who can understand and appreciate it.  This is as fine a love story as there is.

Based on the short story by Annie Proulx, “Brokeback Mountain” is a perfect and distraction-less demonstration of how two people can share in a genuine adoration for one another.