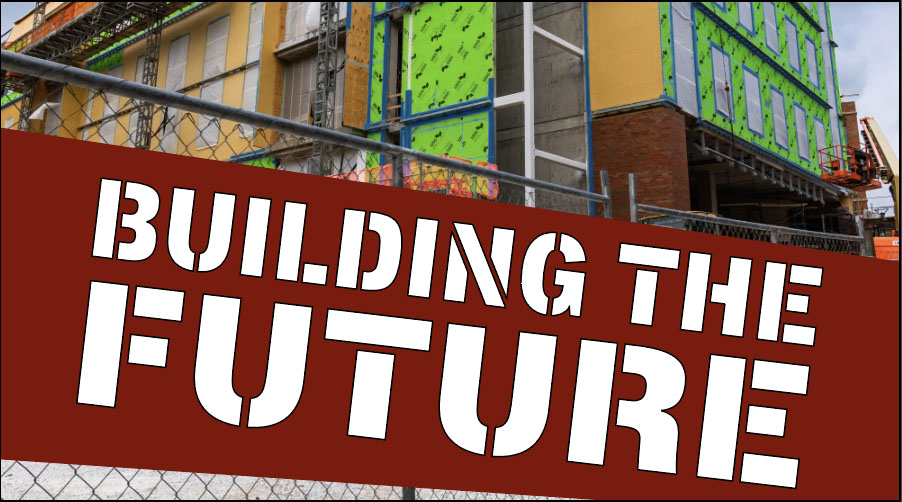 With the recent renovations to both Residence Tower and Burdick Hall completed, and new science building and University Union underway, the community has watched as Towson has tried to combat space limitations. While there may not be a quick fix, the coming years are full of projects happening across campus including finishing Glen Dining Hall’s 21,000 square-foot renovation.

Though it was originally scheduled to open for the spring semester, the Glen Dining Hall is on track to reopen to students over spring break of 2020 after closing earlier this year, according to Sean Welsh, the University’s Associate Vice President of Communications and Media Relations.

“As we moved from design into construction, unforeseen building conditions required attention and impacted our schedule,” Welsh said.

The new dining hall will have expanded food venues in an open market-style arrangement, and, when finished, will have cost $11.6 million, Welsh said.

“Seating will be new and improved and there has been a thorough renovation of the food prep areas,” Welsh said.

To communications major Austin Rannals, the construction is frustrating.

“It definitely gets in the way of going to class,” Rannals said. “I actually don’t like it because I’m going to be a senior, and I’m graduating so right now it’s in my way. But I think when it’s done it’ll actually be pretty cool.”

The dining hall is not the only area on campus that required extra attention this fall. Welsh said that, according to the University Master Plan, Stephens Annex was set to be phased out in the near future. Those plans have been expedited.

Faculty in the Annex were moved to Stephens Hall, Cook Library, the 7800 building, and the trailers near Towsontown Garage due to reports of non-toxic mold.

The Public Communication Center was also a part of Stephens Annex and has now been moved to the second floor of the library. According to sophomores Ciara Franklin and Amanda Chiei, who are public communication consultants, this shift didn’t come easy.

“They were really awkward about it.” Franklin said. “We were upstairs on the 3rd floor at first in the back and they didn’t really know where we were supposed to be.”

Chiei added that they had put them in a quiet zone, too.

According to Welsh, Stephens Annex will be removed from campus, opening up more space for student-oriented projects.

The new College of Health Professions building could be considered one of those projects. With a $13.7 million design contract, construction for the new building is projected to begin in 2021 and be finished in 2024, according to Welsh.

According to the Campus Master Plan, the building will sit in the space behind Prettyman and Scarborough.

“The building will address our existing campus space deficit and enrollment growth in health sciences over the last several years,” Welsh said.

According to Towson University President Kim Schatzel, who testified in front of the Senate Capital Budget subcommittee in Annapolis, the University has been granted two years of planning money towards this project.

“We’ve received two years of planning money as originally scheduled,” Schatzel said. “So, that involves the fact that we start all the mechanicals, the drawings, all the design features to be able to do that.”

Schatzel added that any money toward starting construction will have to be testified for in the upcoming spring legislative session.

“The first money that will be extended to put a shovel into the ground, to really start construction, will occur with this legislative session coming up in the spring,” Schatzel said. “So, I will be testifying for that again.”

Though the University is still working to secure funding for the estimated $166 million dollar project, Welsh said the new college will have academic classrooms, offices, and lab space for the departments of Health Sciences, Speech-Language Pathology and Audiology, Kinesiology, Nursing, and Occupational Therapy and Occupational Science, which are currently spread over six locations across campus.

To Schatzel, the need for a Health Professions building stems from the fact that in the study and working world of health professions, they are all interconnected.

“So much of the education today is based around on interprofessional education,” Schatzel said. Which means that those that are in different professions of health work in teams basically within a hospital or health setting to be able to deliver quality care. We can best be able to mirror that if everybody is together in the same building. And that’s kind of the plan, to be able to do that. So, we’re really excited for both the faculty and the students.”

According to page 33 of the University Master Plan, the College of Health Professions building will add about 250,000 square feet for these departments. Some space for the programs, however, will have to be maintained in Burdick Hall and Towson Center.

The construction of the college behind Prettyman and Scarborough would result in the need to move Glen Esk.

Schatzel acknowledged Glen Esk’s historical significance as the reasoning for it to be relocated rather than removed from campus.

“We will probably end up moving it because of the fact that it was the President’s house and one of the first four buildings on campus,” Schatzel said.

The University, Welsh said, wants to continue to hold on to the history that the building holds.

“While final use is still under advisement, a number of uses, including a café, have been considered,” Welsh said. “The working plan is to move it a short distance near Lot 6.”

Freshman Sarah Shea feels that the cafe could be a good idea as long as the building retains its historical significance.

“I would say that as long as they kept the historical part behind it, and renovated it to go with the history of it, then it could be really good,” Shea said.

Despite the construction that could take place behind them, Prettyman and Scarborough residents have nothing to fear. According to Welsh, though the Master Plan does call for the buildings to be removed for new academic space, Towson has no immediate plans to act on this.

In the meantime, the University has worked to make the two residence halls more comfortable to students. Over the summer, air conditioning window units were installed throughout the buildings. Improvements were also made to the bathrooms.

Though an HVAC system was not added to the buildings, the project still cost the university about $900,000 in design, electrical and installation. Welsh added that the units also made it easier to get the dorms air conditioned in time for fall move in.

“Window air conditioning units were installed because they are more cost-effective and were simpler to install in an expedient manner to ensure our current resident students had a comfortable experience to start the fall semester,” Welsh said.

– Bailey Hendricks contributed to this article. 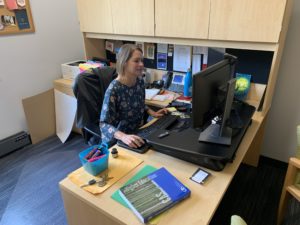