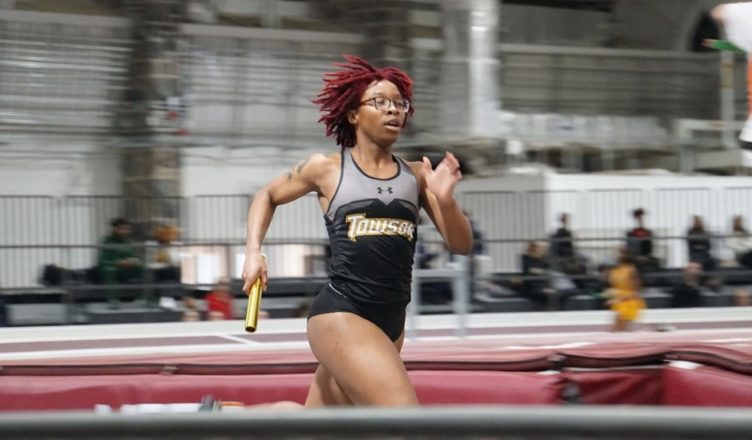 The second day of the Music City Classic featured freshman Michella Obijiaku, who had a personal-best performance in the shot put throwing 15.35 meters as she competed in her first meet for the Tigers.

Freshman Crystal Johnson placed 11th in the 60-meter dash, timing 7.62 on the second day of the Music City Classic. She had a personal-record on day one of the meet in the 200 meters with a time of 24.87.

Johnson and Obijiaku were some of the younger Towson athletes who found success during the Music City Classic.

“Well it really helps them to build confidence and know that anything’s possible,” said Head Coach Mike Jackson. “If you have a goal of making it to NCAAs you have to be around student-athletes that are capable of making it, but more importantly, sharpening your tools because you’re going to see them again in the coming months.”

“I think there were some good performances,” Jackson said. “Most importantly, we got a chance to compete against some of the best in the country.”

McLean timed 7.61 and took third place in the 60-meter dash, earning a personal-best performance. She also placed 45th in the 200-meter dash timing 25.50.

Freshman Alexandria Kitchell had a personal-best time of 1:17.62 in the 500-meter dash.

“It’s very encouraging,” Jackson said. “Boston University has a great facility, great track and that was really the point of bringing our student-athletes up there, to get them excited about what they’re doing and I think we were able to accomplish that.”

“She’s really come on her junior year as well as this year,” Jackson said. “Very gifted athlete and so excited about what she’s doing and looking forward to her being able to score points during championship season.”

“She’s a super talented freshman just adjusted to the college season,” Jackson said.” It’s her first ever indoor season. Just one of our best recruits to ever come out of high school, so we’re confident that she’s going to continue to improve.”

Jackson was pleased with his team’s performance this past weekend.

“I would call it solid,” Jackson said.” Some were disappointed in their performances and we’re looking forward to the next meet on Friday to compete together as a team. I think it’s time to really get going with some big time performances.”

Towson will compete at the Fastrack Last Chance Invitational at the Ocean Breeze Athletic Complex in Staten Island, New York on Friday, Feb. 15.

“I’m expecting personal bests,” Jackson said.” I’m expecting us to come together as a team, show what we can do and just continue to build confidence.”