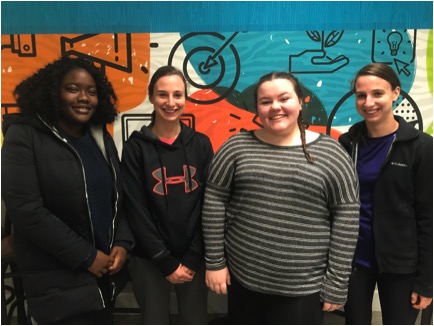 Photo by Rohan Mattu/ The Towerlight

Café Enactus, the student run deli and café located on the first floor of Stephens Hall, is under new management this semester.

Nicole Cooney and Elizabeth Adeoye have stepped into the positions of the café’s director and assistant director, respectively.

Since establishing the café in 2015, sisters Megan and Meredith Price have performed the day-to-day operations of keeping the café running alongside their peers. Next semester, the Price twins are graduating, and in preparation, they have put Café Enactus in new hands.

Megan Price spoke on what she was looking for in her and her sister’s successors.

“I was looking for people who were interested in learning, who wanted to get more involved, someone who wanted to apply what they learn in the classroom,” she said. “That’s why Elizabeth, a marketing major, wanted to help with marketing.”

“We’ve been discussing a succession plan, and they’ve been working with Nicole and Elizabeth to pass the baton so to speak,” Marr said. “I think this transition will be real successful.”

Cooney, hired as the new director, is a political science and economics dual major in her sophomore year.

“I feel very lucky to be able to take over such a well-established, student-run business,” Cooney said. “I know I have some really big shoes to fill. Since I have been hired, I have been director-in-training, making schedules and more recently hiring staff to help smooth the transition into next semester.”

As assistant director, Adeoye, a marketing major also in her sophomore year, assists Cooney by working with Chartwells Dining Services to stock the café, as well as helping market the café on campus.

Cooney and Adeoye do not plan on making any immediate changes, saying that they like the café just the way it is. The two plan on increasing advertising of the café in an effort to gain traffic not only from students in Stephens Hall, but from further reaches of campus. One long-term goal the new management has in mind is eventually moving to a bigger space.

For the Price sisters, leaving the café is bittersweet.

“I’m glad and excited to put the café in good hands, because it’s an amazing learning experience, and I’ve learned a lot from it over the last couple of years,” Meredith Price said. “I’m sad to leave because I’ve put a lot of effort into it, but at the same time it’s good to go.”